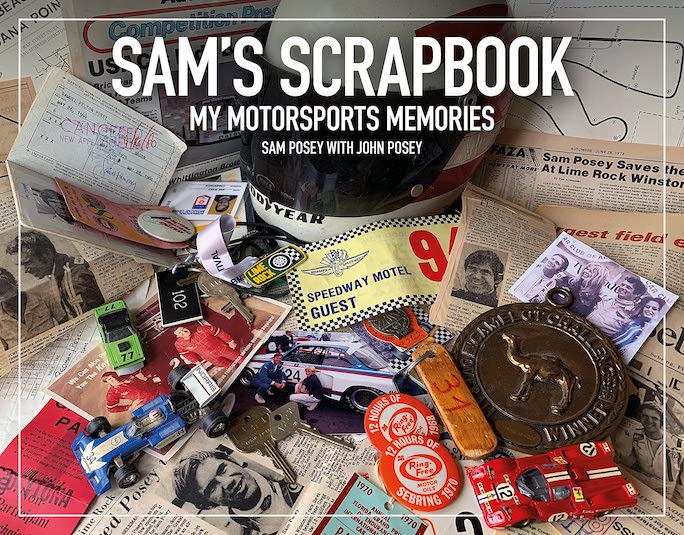 “One team mate after another, he can’t keep a friend. This is not a guy you would want to marry your daughter!”

Sam Posey isn’t the first driver to create a scrapbook–Stirling Moss is probably pre-eminent in this genre, which has also included fellow Grand Prix drivers Bruce McLaren and Martin Brundle. Sam Posey might have never enjoyed the kind of success that would have enabled  him to remain in the premier echelons of the sport but, despite a relatively modest career, his name has been familiar to the motor racing world for decades. His outspoken and confident persona led to his “Sam ‘the Mouth’ Posey” nickname, and even before he had retired from race driving he was exploiting his eloquence as a race commentator for ABC Sports. But it is as a writer that Posey is perhaps best known; he wrote his first book, The Mudge Pond Express, in 1976 and a copy will now cost between $300 and $1000. In 2015 Posey’s Where the Writer Meets the Road anthology was universally acclaimed, and I loved it. Race drivers are a matter of fact breed, with public utterances often confined to cliché and impenetrable muttering about tire degradation and the like. Not Posey–in his last book he riffed beautifully on how the light at Le Mans was “the light of Monet, the light of Gothic Cathedrals.” 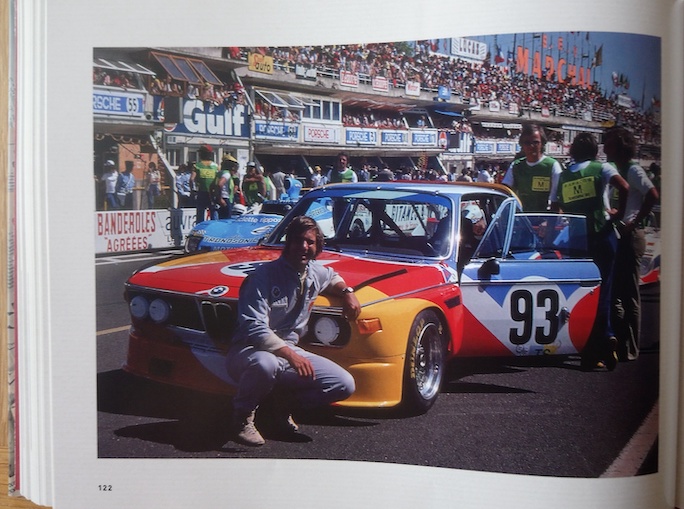 My expectations were high for this book and although it fails to reach the height of the bar set by Posey’s previous work, it is still an absorbing read. The book comprises over 60 vignettes, each of 1–4 pages, describing events in Posey’s life on and off the race track. They are crisply titled—“Mom’s Citroën”, “Alone in the Desert” and “Concorde Commute”—and although they held this reader’s  interest, the prose often lacks some of the sparkle I had come to expect from Posey’s previous work. The publisher, Evro, has produced a high-quality book whose heft and glossy appearance belie its relatively modest price. The cover is a collage of ephemera such as tickets, press clippings and keys and, although many reappear in the text, most chapters are primarily illustrated by period photographs. The chapters are in date order, and I found the insights into Posey’s early life the most intriguing—how many 14-year-olds have been able to buy a car like a Mercedes 300SL Gullwing? And it wasn’t the typical 18-year-old who was able to buy themselves a Porsche 904 in 1966—“I was lucky enough to be able to write the [$5000] check.”

Although Posey was able to touch the hem of Formula One, it is for his exploits in F5000, Trans Am, and Can Am for which he is best known. He also enjoyed success at Le Mans and, much as he enthuses about happy days spent at Lime Rock and Laguna Seca, it is clear he lost his heart to La Sarthe. Posey is  now 77, living with Parkinson’s disease, and it would take a harder heart than mine not to be moved by this description of his salad days. “It was the quintessential French day, under the soft French skies. I had the girl of my dreams beside me. I was 27, and I’d just finished third in the world’s greatest race. It was pure happiness.” Was there an echo here of the words of another American émigré, looking back to his youth from his old age—Hemingway, in the sublime A Moveable Feast?

The career arc of a typical 21st Century road race driver starts with karts, ascending the ranks of progressively faster spec formula single seaters before eventually stalling in GT, DTM, or WEC. Only the driver with the right combination of talent, money, and luck will now be considered for a drive in Formula One, and even if they succeed, most of their seat time will be spent in a simulator. But life for Sam Posey was very different, because accounts of Baja (“I loved the desert. This was the desert of deserts”), Mount Equinox classic hill climb (“The trophy was four glasses hand painted with pastoral scenes”) and the Road & Track backwards challenge (“What you needed was a long reverse gear”) punctuate the higher-profile Indy, Can Am, and Le Mans stories. There were new stories for this reader, such as the saga of the Caldwell D7 (middle photo) –“Out of our depth”—and a reprise of old favorites—“Attacked by Revson”.

Sam’s Scrapbook is an endearing retrospective of the author’s career, with a tone that, touchingly, can verge on the elegiac. All-American racer Sam might have been, but the reader will be left in no doubt that Le Mans was his very own field of dreams, his “Down a Dark Hall at 185 mph” account of his race in a BMW CSL cemented his reputation as that rarest of breeds, the writer/racer. I will wager that he would never feel more alive than when he was spearing down the Mulsanne on that hot June night in 1976. Reader’s Digest copyright presumably prevented the inclusion of the full transcript.

My verdict? A must-read for Posey fans, and a recommended read for any student of the era. A well written book, if lacking the elan of his earlier work.