Of Firebirds & Moonmen: A Designer’s Story from the Golden Age 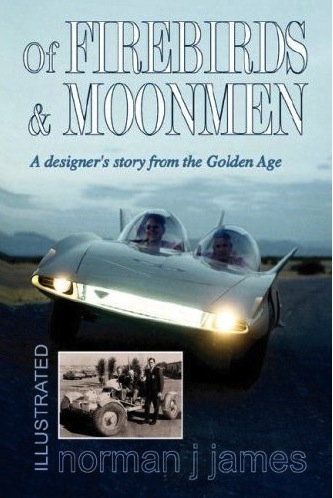 If you were a newly-minted designer in the 1950s, the place you would want to go to work would be General Motors. Legendary Harley Earl ran his design division as his own private fiefdom, and his Knight’s Errant were his designers. Assuming you were lucky and talented enough to become a part of Earl’s design staff, what could be better than to be chosen to create a gas turbine-powered concept car for the General Motors Motorama? That was the position Norman James found himself in when the 25 year-old designer was put in charge of the Firebird III project in 1957.

James grew up in western part of New York State, his nerdy childhood filled with model rockets and homemade telescopes. He attended the well-regarded Pratt Institute in Brooklyn, New York and in the summer before his senior year was chosen as a design intern at General Motors. As these things happen, he ended up working on the Firebird II concept car under Bob McLean, and rather than return to Pratt for his senior year was asked to stay on working for GM. James managed to commute between Detroit and New York to finish his degree and work full-time at Design Staff.

Having worked on Firebird II, James was a natural choice for the Firebird III project. It was during this time that he met many of the men who would succeed Harley Earl to become the greats and near-greats of GM styling and the world of automotive design. Of Firebirds & Moonmen is filled with names like McLean, Bill Mitchell, Chuck Jordan, Stan Mott, Robert Cumberford and Stefan Habsburg, people who provided GM’s vision into the 1960s and beyond. Having lived with the Firebird III for more than two years—drawing its distinctive shape, creating its body, working with engineering staff to produce drivable prototypes and becoming involved in the filming of the vehicle for its debut—we can sympathize with James’ disappointment when he isn’t invited to come to New York for the 1959 Motorama at the Waldorf-Astoria hotel.

Norman James’ career took an interesting turn when, in 1963, he moved to the GM Defense Research Laboratories in Santa Barbara, California to work on lunar vehicles for the space program. The author includes many of his early sketches and drawings for lunar rovers and it is easy to see the evolution that ultimately led to the lunar exploration vehicles that Apollo astronauts took to the moon. James ended his design career working in the aerospace industry, including work on the Lockheed-Martin X-33 lifting body program.

Of Firebirds & Moonmen isn’t a book for everyone. The author’s memory for the details of his life is impressive, but perhaps not every reader will want to know the details of each apartment the up-and-coming designer lived in or his favorite place to eat. However, when the details concern the design process at General Motors and the intricacies of projects like the Firebird III, we are fortunate for the power of his reminisces. Unfortunately, the book has no index, making quick access to those interesting tidbits inconvenient.

Ultimately, what Of Firebirds & Moonmen creates is a record of what it was like to be a designer during GM’s golden age. It is a memoir whose author was there when it happened and whose life, in all of its detail, provides a glimpse of how what was then the world’s largest company produced some of its most iconic designs.

Racing for Mercedes-Benz, A Dictionary of the 240 Fastest Drivers of the Marque »
« Rolls-Royce Chassis Card Index