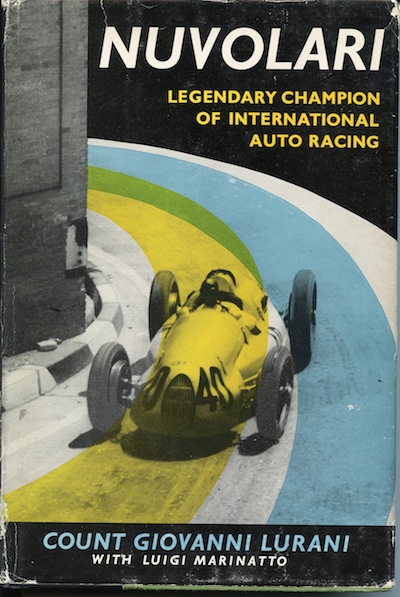 To consider Nuvolari by Johnny Lurani as being an excellent example of automobile racing hagiography might very well be accurate, but that may also be beside the point. After all, it was very likely Lurani’s biography of Nuvolari (1892–1953) that provided the first in-depth look at the life—and legend—of the great Tazio Nuvolari to countless English-speaking racing fans. It was here in these pages that many a young man, schoolboy and workingman alike, read about the various escapades and adventures of the man many still consider the greatest racing driver, ever.

How does the book stand up half a century after its appearance? In some respects, probably not very well. The obviously invented or created dialogue is rather typical of these sorts of biographies, yet one finds this not quite as annoying as first imagined. One is slowly pulled into the legend of Nuvolari and soon such matters are mere trifles.

A generation or two or three ago, the very mention of Nuvolari set the imagination in motion: the fiery little Mantuan battling his way to victory, almost always against the odds, overcoming injuries and family tragedies to triumph on the race track. His astounding victory over the might of the German teams on their home ground, the Nürburgring, at the German Grand Prix of 1935 was, indeed, the stuff of legend, a victory so unexpected as to confound even the most optimistic Italian. That Nuvolari later drove for one of the German teams, Auto Union, and won, is one of life’s small ironies.

While, as mentioned, a bit dated and far more worshipful of the maestro than one would wish to see in a biography, there is also the sense that approaching Nuvolari in the cold, neutral manner of an impartial biographer would, somehow, be to lose something of the magic that made Nuvolari so special to those in the world he inhabited in the 1930s. It is clear that Nuvolari was a professional in the very best sense of the word—he not only knew his worth, but he also understood that he was obligated to give his best to the audience, the spectators, which he invariably did.

I had not actually read this book in at least 30 years when I took it off the shelf and, looking for some item, skimmed through it. On a whim, I sat down and read the book for the first time in many years. While, as noted, it was certainly not the sort of book that might have been written today, that the translation of John Eason Gibson flows so well was probably helped by the fact that Johnny Lurani could also converse and write in English. More importantly, as I read the book I was transported back to a day when we were, perhaps, a bit less cynical and more prone to take things as they were offered. It was nice to be reminded of a time when there really were men such as Nuvolari in our midst.

This is the sort of book we need to read from time to time to help us adjust our bearings.

Posted Under: Automobiles, Biography/ Autobiography, Out of Print, Racing, Rally | Author: Donald Capps | No comments yet