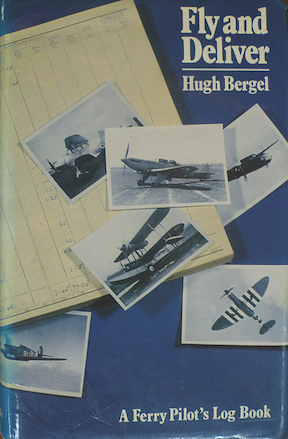 What were they like to fly? With memories now at least seventy years old, and the privilege of flying the surviving aeroplanes of the Second World War justifiably restricted to just a few expert pilots, a book such as this invaluable.

At 35 when war broke out, he was too old to be considered for RAF service, and his 150 hours of flying since he first learned at Stag Lane airfield had been mostly spent in gliders, so he continued in his “reserved” occupation at the respected tool manufacturing company of Desoutter Bros.

The Air Transport Auxiliary (ATA; the unoffcial motto uses the same letters—“Anything To Anywhere”) had been formed at the instigation of Gerard d’Erlanger (later Sir Gerard, and the head of British Airways) in 1938, to provide a pool of experienced amateur pilots to maintain a communications network in the event of disruption caused by wartime bombing. During the “phony war” period these pilots were underemployed, so it was suggested that they could ferry the simpler service aircraft. With the onset of the Battle of Britain, the demand for pilots meant that the ATA reduced the flying experience requirement to 150 hours, so Bergel squeaked in, and undertook a two-week training course, followed by 65 minutes of dual instruction on a Fairey Battle, 55 minutes in a Harvard, then 3.5 hours solo, before being cleared for his first ferrying task in a Percival Proctor on 25 October 1940.

It has been a pleasure to reread this book, which I bought from a specialist bookshop in Auckland, New Zealand,  in 1982 for the then hefty sum of $24. Thanks to the network of specialist booksellers under AbeBooks it is easy to find a copy now, and for a very reasonable price. Airlife Publishing used good paper, with the illustrations printed on art paper, so there is not the suggestion of elderly cats which assails the nostrils when so many books of the 1970s and ‘80s are opened.

Bergel’s writing style is delightful; for instance, he described the sight of a Bell Airacobra, with its rigidly and centrally mounted Allison V12 engine “produced so much vibration . . . running at anything less than 1,000 r.p.m., the outline of the Airacobra became the blurred outlines of two Airacobras a few inches apart.” His personal quirks included a thorough disliking of train travel, so he did his very best to arrange flights to minimize his irritations, and, along with many of his colleagues, he became an avid “type collector” with 91 different aeroplane types, including varying Marks, to his credit.

He was one of only two ATA pilots authorized to fly the Hawker Typhoon, which had the complex Napier Sabre engine (24 cylinders as an “H” on its side, with two horizontally opposed 12 cylinder sleeve valve engines atop one another, with their separate crankshafts flexibly linked) of a mind-boggling 2,300 horsepower delivered at the high speed of 3,700 rpm. And a rumored service life of the early engines of only 20 hours! Here we have a slight discrepancy, with Bergel recording a telephone call from the commanding officer of a Typhoon training establishment, requesting that Typhoons be delivered by ATA women pilots, to reassure his nail-biting pupils.

The illustrations include his Log Book from 6 to 20 December 1942, showing, for instance, that on the 8th he flew an Avro Anson, a Hawker Typhoon, and an Avro Manchester, twin-engined predecessor of the Lancaster. To fly, on the same day, a Tiger Moth and a Spitfire, or a Lancaster, usually as a sole pilot, tends to bring a chap who feels challenged by an unfamiliar car dashboard layout up a bit short.

The hundreds of brave pilots who made up the ATA included Amy Johnson and Jim Mollison; Diana Barnato, daughter of Captain Woolf Barnato of Bentley fame; John Cobb, then holder of the Land Speed Record; Philip Wills, with New Zealand family links to the South Island high country sheep stations Irishman Creek, Tekapo and Snowdon, and future World Gliding Champion; Joan Hughes, who was small and light enough to fly the replica Santos Dumont Demoiselle in the film “Those Magnificent Men in Their Flying Machines”; and Charles Amherst Villiers, the automotive supercharging expert.
The ATA operated some 200 “taxi” aeroplanes, mostly Avro Ansons, for almost 200,000 flying hours. The pressure of delivering complex aeroplanes, without any “dual” instruction, over unfamiliar territory in frequently awful British weather, must have been daunting, and the ATA lost 12% of its personnel during the war. From the accident investigating regime established by d’Erlanger, came the procedure which still prevails throughout the world, and also the civil aviation organization which became British European Airways, later merged with British Overseas Airways Corporation, to become British Airways.

Hugh Bergel, who rose to Officer Commanding No.9 Ferry Pool (the ATA had 16 pools), later described his time with ATA as “four and a half years of complete happiness”, and went on to a career in advertising and enjoyment of his Type 35T Bugatti, before dying in 1986 at the age of 80. His colleagues have also passed on, but Fly and Deliver gives us at least an appreciation of their contribution. It is readily available in various formats and recommended.

Bonneville: A Century of Speed »
« Il Cavallino Nel Cuore, Autobiography of a Designer