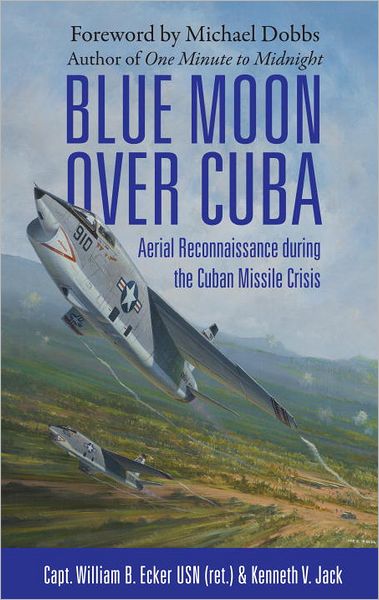 “It is our hope that . . . a new generation of readers will learn the vital lesson that emerged from this Cold War stand-off—sometimes nations act irrationally in their national interest, and the resulting unintended consequences can thrust nuclear-armed countries into a death spiral that could impact all of human civilization.”

Blue Moon . . . sounds like a song lyric but it’s really the codename for a classified operation that put critical information into US President Kennedy’s hands during what the Cubans call the “October Crisis” in 1962.

Considering that this 13-day confrontation between the USSR and the US pushed the world to the brink of nuclear conflict one would think that every morsel of data about such a momentous event would have been put under the microscope long ago. But only now, on the occasion of its 50th anniversary does this insider’s account finally see the light of day—but he isn’t even alive any more to see it!

Not only is Ecker’s memoir the only known personal account of the squadron’s missions, he is the US Navy captain that commanded it and flew the first tree top-level flight to flesh out the high-level imagery gathered by U-2 spy planes (security was so tight that U-2 intel was not shared with Ecker’s people!). Co-author Jack, who finished the book after having worked with Ecker on it years ago, was also a member of Light Photographic Squadron (VFP) 62. It is he who expanded the memoir that had been sitting around unpublished since 1986 (although it was used as a primary reference source in a number of documentary and theatrical films [Kevin Costner’s Thirteen Days]) into a proper historical treatment of the buildup to the crisis and its aftermath. Contributions from other personnel are woven into the narrative or extensively quoted verbatim, thus offering a host of perspectives. A diverse and competent cadre of experts and reviewers provided input, resulting in significant improvements to the manuscript.

Current-day readers who too live in a world beset with crises will have to make a mental effort to grasp the palpable sense of imminent doom experienced by the “duck and cover” generation: weekly air raid siren tests, civilian defense drills, fallout shelters in the backyard.

The focus of the book is what makes it different from the multitude of others. It tells the story from the perspective of the proverbial “tip of the spear,” the sharp end where presidential decisions are executed in the field. It covers a lot of ground and will leave the reader astonished that not more went wrong, whether that’s the contentiousness among Kennedy’s advisers, the CIA not recognizing the location of the Russian warheads in the VFP-62 photos, or even the personalities of the Soviet and American heads of state.

The very nice Foreword is by author Michael Dobbs who certainly knows the subject inside out (he was the first non-military researcher to request and be granted access to the thousands of cans of raw intelligence film) and wrote his own very solid treatment of the subject, One Minute To Midnight: Kennedy, Khrushchev, and Castro on the Brink of Nuclear War (2008).

Operation Blue Moon was executed by US Naval, Marine Corps, and Air Force squadrons but the latter doesn’t quite get the same attention here. A suitable selection of throughly captioned photos is bundled into two stand-alone sections of the book. This wouldn’t be an Osprey title if there weren’t color profiles of aircraft so there are four views of the Vought F8U-1P (RF-8A) Crusader (also b/w 3-views). The text also refers to the RF-101C Voodoo and of course the U-2. Jack was trained as a Navy photographer and then worked as a photographic-electronics technician on the Crusader’s forward-firing KA-45 camera, leading its carrier (USS Forrestal) and night-photographic tests.

There are Chapter Notes at the back of the book and appended are two maps and Kennedy’s public address on 10/22/62 and his remarks upon presenting unit citations that November.

It is no exaggeration to say the book reads like a suspense thriller—no small feat, this being Jack’s first book.

Jaguar E-Type: The Definitive History »
« Chrysler: The Life and Times of an American Automotive Genius