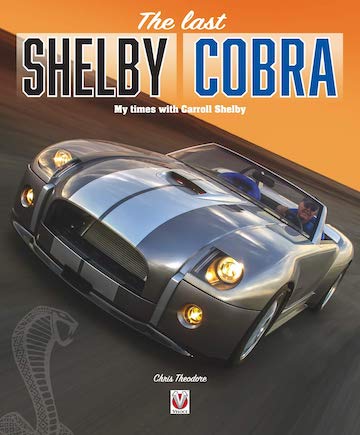 “Carroll’s passing had left me in a deep funk. My mind was flooded for weeks with memories of our conversations. I could still hear him, and see him in my mind’s eye. I slept little. When I did sleep, Carroll and I would discuss unfinished business in my vivid dreams. I decided to start writing down all the moments and conversations we’d had, so that they wouldn’t slip away.”

With original 1960s “continuation cars” still being sold, what exactly the “last Cobra” is will mean different things to different people. The clue to what this book is about is the name of the author: it must be about the last quarter of Carroll Shelby’s life because that’s when Theodore worked with Shelby on such vehicles as the Dodge Viper, Ford GT, Shelby Cobra Concept, Shelby GR1, and Shelby Mustang GT500.

People who follow the collector car scene would have taken note of Theodore’ name in a Shelby context at least twice already: before retiring in 2004 as Ford VP of Advanced Product Creation he used his employee discount to buy himself one of the models he helped create, a Ford GT (his is no. 8), which these days easily fetches triple its MSRP; and in 2017 he had the winning bid for what for all practical purposes really is the last Cobra Carroll Shelby (1923–2012) was involved with, the one-off V10 Cobra concept car code-named Daisy from the 2004 Detroit Auto Show. 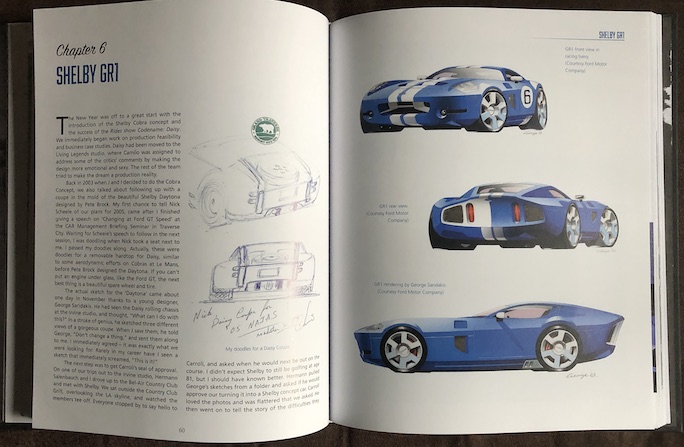 In other words . . . Theodore is totally the man to write this book! He knows things that are not common knowledge, he has decades-long high-level auto industry practice (and these days runs a design and engineering consulting firm), and he knew Shelby on many levels and at a time of life when Shelby had a more temperate, and probably also more weary, outlook on life and the persona the public expected him to be. 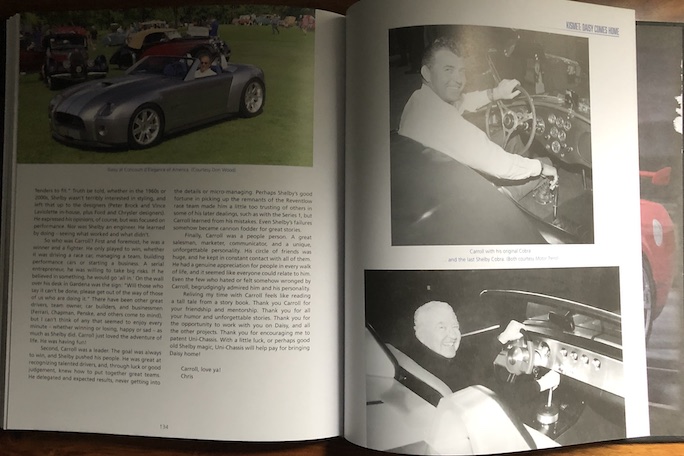 The Foreword by Shelby’s grandson Aaron deftly sets the scene. Not least it emphasizes that even someone in the catbird seat like himself who could pester Grandpa with questions any time (and these days, among other things, as member of the Board of Carroll Shelby International, the umbrella organization for the Shelby entities, acting as brand ambassador for Shelby and involved with maintaining the relationship with Ford) is gaining insights from this book. 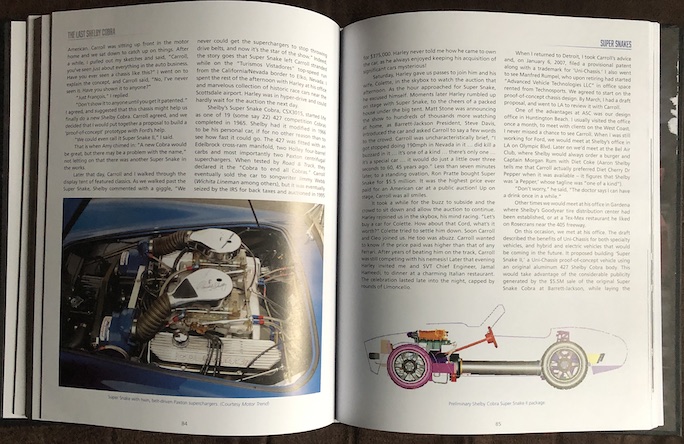 As Theodore points out in his Prologue, he was a principal player in the events he recounts—“the true story about Carroll’s return to Ford”—but even so is mindful of the fact that one person’s reality does not constitute absolute truth and that corroboration and other perspectives are needed to flesh out the picture (the list of Acknowledgements is indeed long). In writing this book even he learned more about the backstory of events he had witnessed first-hand. These are important qualifiers because this book treads ground that has not yet been well covered, and the veracity of its observations may well inform our reading of earlier events that may have been exhaustively covered but can now be seen in a different light. It can only instill confidence to see Theodore writing “Carroll was no angel, but his flaws only made him that much more memorable. I hope that Carroll’s own words from our many conversations will reveal his true character.” 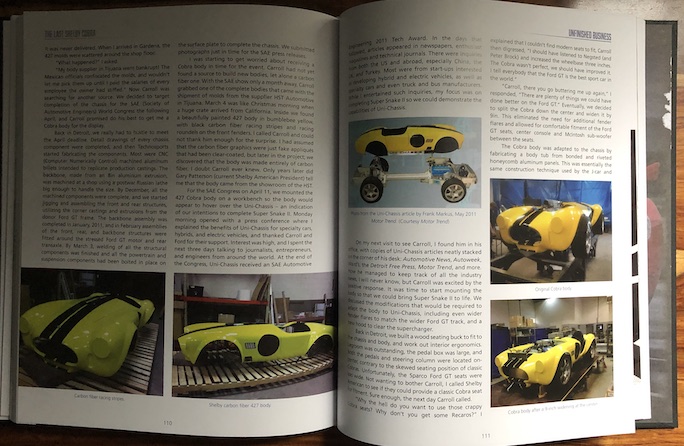 While the book offers the usual sanitized boilerplate mini bio of the author it is rather too circumspect in regard to some key bona fides that would help the reader appreciate the acuity of Theodore’s frame of reference: he considers AMC to have had a great culture, likens his time at Chrysler (1989–95/96, i.e. pre Daimler) under Lutz and Castaing to “being at Camelot,” and rated the tensions in the Daimler-Chrysler merger so severe that he left for Ford—only to discover that the political infighting was still as bad as during his first Ford stint. The common denominator here is the role teamwork is allowed to have in a corporation, and this sensibility permeates his work with Shelby. 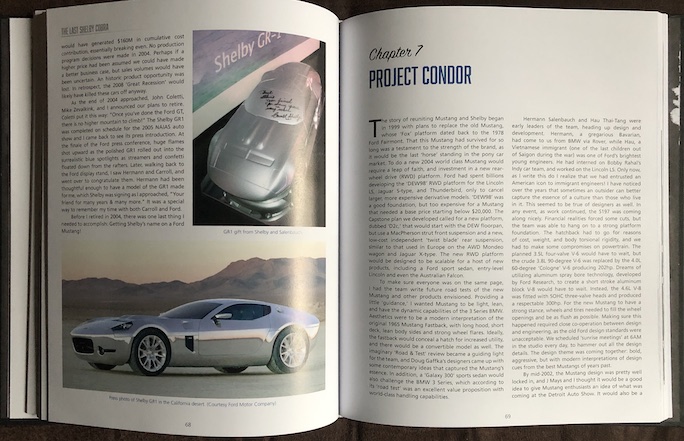 The first few pages lay out the author’s boyhood motorsports interests which of course reference Shelby’s 1959 Le Mans win and everything in its wake, and then skips forward to 1978 and his time at Chrysler and the appointment of Iacocca who in turn hired Shelby as a performance consultant—and with that, barely 15 pages into the book, we’re getting into the meat of the story. It progresses mainly chronologically but being multi-tired, not everything has a direct or exclusive Shelby connection. Seeing for instance the approval phase for Project Petunia (aka Ford GT) from an insider’s perspective is a tantalizing, almost comical bit of automotive history. 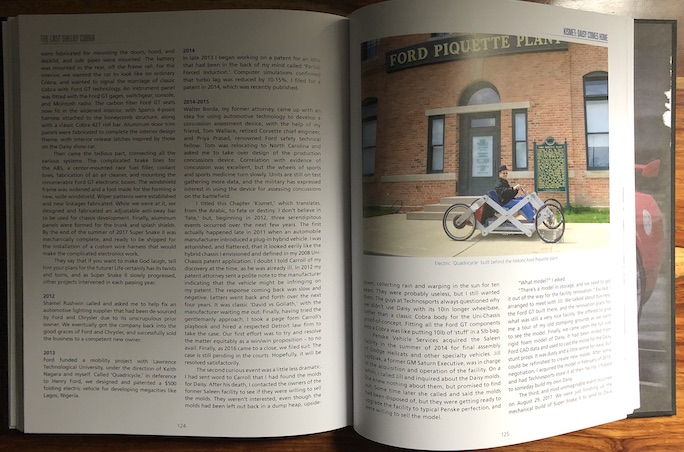 Theodore may say he’s not an author or a journalist but he writes fluidly and persuasively, has a point of view, casts a wide net, and in the end you will know more than you did at the beginning. The aforementioned Daisy will become the stuff of legend—here you will get the reason why Ford auctioned it in the first place, how (for liability reasons) the fully functional automobile was made undriveable, and how Theodore et al put it all back into running order.

Several of the eight Appendices will prove invaluable to researches, most especially the first one, a 2004 letter by Automotive Hall of Famer Roy Lunn who headed the original Ford GT project that offers a “from the horse’s mouth” definitive recap of that model’s origin story. He died in 2017 so he won’t be able to take “the distorters” to task again! There’s even a really useful Index, and good and plentiful illustrations.

The book, then, advances the record in a meaningful way—what greater compliment is there? One can only hope it won’t be Theodore’s last.

The Face of Change: Portraits of Automotive Evolution »
« Valkyrie: The North American XB-70