The ATL-98 Carvair: A Comprehensive History of the Aircraft and All 21 Airframes 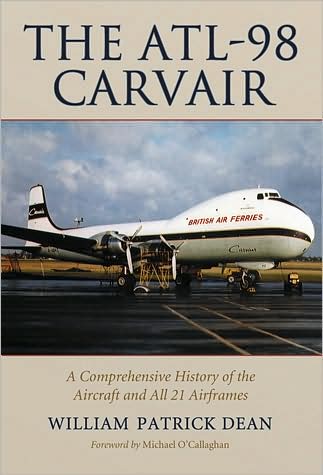 “It would be hard to imagine any fleet of aircraft more woven into world politics, operating in more remote areas, or transporting more diverse cargo.”

A true hybrid aircraft, modified from existing airframes to accomplish a specific purpose, the Carvair was primarily a car ferry that allowed commercial air passengers to accompany their cars on the same flight.

If you ever saw one, you’d have remembered. If you haven’t seen one, you truly missed something unique! (If nothing else, watch the James Bond movie Goldfinger!) Two of the 21 airframes built are still airworthy so there’s a chance you may clap your eyes on one yet, especially if you live in Texas [N89FA] or in South Africa [9J-PAA, presently inactive]. A third survivor crashed only in 2007, three years out of restoration, in Alaska.

Smitten as I’ve been with the Carvair ever since flying on one in the 1960s, I still say in all objectivity that this is a supremely well-presented book in ways that transcend its immediate topic. Dean, it so happens, saw his first one in the flesh at about the same time, as a USAF mechanic on C-124 Globemasters—another aircraft I’d love to see in my driveway—on deployment to the UK. What started out as professional curiosity (both freighters are front-loaders and both are made by Douglas; today’s jet-engined C-17 Globemaster III is a Boeing) turned into 20 years of collecting material about the Carvair and adding it to his files on 10,000 other aircraft.

Chance encounters with Carvairs over the years renewed Dean’s interest until a decidedly unusual chain of events made him feel part of the Carvair story and not just a mere observer (let’s just say that we ought to be publishing this review on an August 28—read the book to know why) and instilled in him a sense of urgency to see this book get done. Writing is a lonely and cumbersome job that hardly ever makes anyone rich. Dean’s reasons for shouldering the task are about as meaningful as they come.

Before even describing the contents of the book, an earlier sentence about it being “supremely well-presented” should be substantiated. Any writer of a nonfiction book—any topic!—ought to take lessons from Dean’s approach, execution, and delivery. Start with the Foreword. Too often written by marquee “names” who have nothing relevant to contribute to the book except lend it an implied air of “importance” and whose own importance is often enough not even laid out for the reader to weigh, this one is by a name you’d hardly know unless you are an Aer Lingus insider but it offers singular, absolutely relevant commentary and truly meaningful context. And the reader is told who he is and why it matters. Full marks.

The author’s own Preface leaves no doubts as to what he is and is not going to do, the scope of the work, the reasons for his choices, his qualifications and interests. Again, the reader is told what’s what and why it matters. And, again, full marks for full disclosure.

Moving on. The author expressly lets the air out of the “definitive account/last word ever” balloon. By the same token, throughout the book nothing is said that can’t be supported by evidence or at least extrapolated with plausibility. While this is hardly a topic for which universal interest can be assumed, the writing is engaging, lively, draws the reader in, and gives precedence to the human-interest angle as opposed to engineering specs and airline minutia. Even small things are done with obvious attention to detail, such as placing photos on the same page or very near to where they best augment the main text (and all are credited). That the writing is uncommonly fluid and devoid of typos may be as much to the author’s as to the publisher’s credit. In terms of writing craft, this text shows how it’s done!

For the sake of offering a more cohesive narrative, the first part of the book lays out a fleet history so that the reader gets a sense for the operational parameters of this type of aircraft and then the second part treats each of the 21 airframes individually. All this is preceded by a discussion of the history of freighters in general and car ferries in particular. It is commendable that Dean is mindful of the fact that what for him as a lifelong professional aviator is plain and obvious is anything but for the general-interest reader, whether this is in regard to aircraft behavior, minutia such as cable routing or cargo hold clearances, or big-picture industry-specific issues such as the dawn of the jet age leading to price drops in the piston aircraft market from whence the donor airframes for the Carvair would come. And, mandatory car comment: the average British car in 1960 was 10˝ longer than in 1950, making the previous hauler, the Bristol 170 Freighter/Superfreighter, increasingly unsuitable.

From initial idea to design/development to construction to problems, everything worth knowing about the plane is covered—not easy, considering that no two Carvairs were alike. Airplane geeks will savor the bits about the proposed DC 6/DC 7 (Dart-powered) models that never got off the drawing board.

Since the book covers new ground it is a given that much of the material here has not been seen before, not just in terms of the photographic record but also engineering and operational data and, obviously, personal recollections.

Hats off to the publisher too for bringing such a niche book to market. It deserves a large audience, and Dean should proudly wear the writer’s hat and dip into his files for more books!

The ATL-98 Carvair: A Comprehensive History of the Aircraft and All 21 Airframes