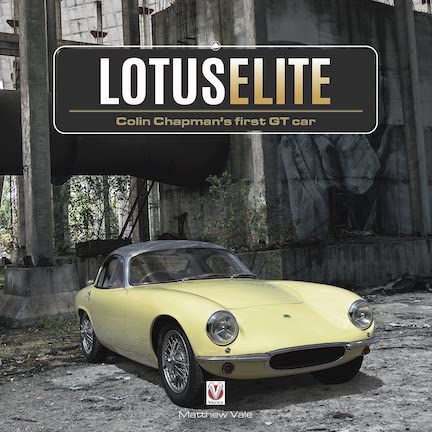 “ . . . no car was as advanced as the Lotus Elite. Introduced at the Earls Court Motor Show in October 1957, and finally reaching paying customers in 1959, the car was a game-changer for the small company that was Lotus at that time. The car marked the maturing of the Lotus concern into a true designer and builder of cars. But not just any car: the Elite was seen as advanced as anything else in production.”

The better-known and certainly more economically successful Lotus Elan can really not be understood without the model that preceded it, the Elite, not just for the obvious reason that technology improves over subsequent iterations but because the Elite changed pretty much everything about how Lotus functioned as a carmaker. The author’s previous book (2013) about the Elan—which probably came first because he owns one—already planted that seed. A retired IT professional he also wrote one about the Europa. 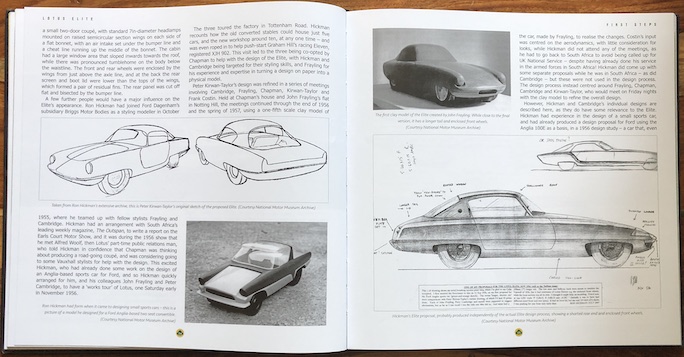 None of these proposals show the Elite as built but only by seeing what all was under consideration can you gauge the merits of the production version.

Readers who were not of car-buying age in the era of the Elite (1957–63 for the first generation) will probably not apprehend that once upon a time even small makers were able to play industry-shaping roles. Lotus had already become a serious name on the racing scene and it was reasonable for the firm’s leaders and backers to expect that cachet translating to road cars. Indeed the first dozen pages of the book paint an impressive picture of the Elite’s many distinctions, yet the chapter ends with the ominous question, “What could possibly go wrong?” No story involving the genius but incendiary—and penny-pinching—Lotus founder Colin Chapman has to look very hard. All things considered, the factors that are quantifiable (cf. new tech, quality control, warranty problems) didn’t sink the company and as to any other factors, you’d need some of the Chapman biographies to get a handle on the man and his ethos. 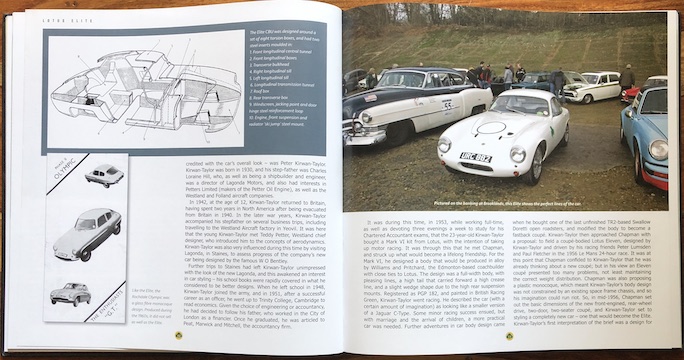 The car on the bottom left is a Rochdale Olympic of the 1960s. It is only in comparison to such contemporaries, many of which came and went, that Lotus’ achievements can be appreciated.

From design to series production to competition history to buyer’s guide to owners profiles, if it is essential to the story it is covered here. Which is not to say that there couldn’t have been more, but then that would be a different book for a different publisher. UK publisher Veloce has decades of experience producing just this sort of competent, high-level book. That said, it so often seems self-limiting that a publisher with international presence/distribution is so UK-centric in regards to naming vendors, marque clubs, and regulatory issues etc. (Just to spare US enthusiasts any agony: Lotus Register founder—and Elite/Elan hybridizer—Mike Ostrov is covered, in a section entitled “Elite Heroes” no less. Being vital to the story, in-period US importer/dealer Jay Chamberlain is given his due as well; his association with Lotus would drive him into bankruptcy, a story that would definitely have to go into the aforementioned “what could go wrong” column.) 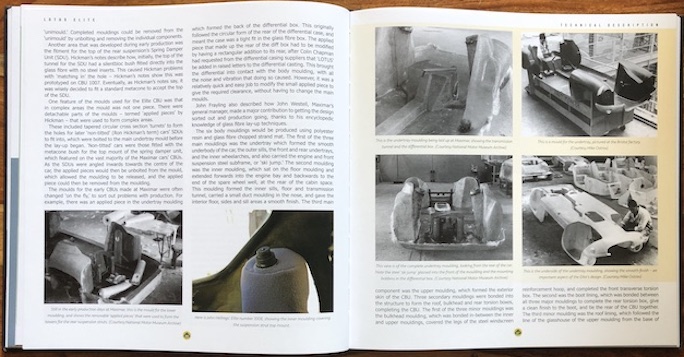 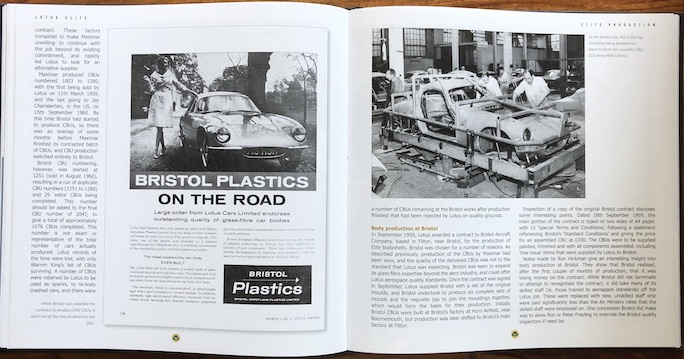 While suitably illustrated it is true that, especially in the general history portion of the text, the cars depicted don’t always exactly fit the story. Newbies will probably stumble upon encountering, say, acronyms for which no explanation is offered. Example: the first time a specific, singular car is called out it is referred to by “CBU.” Nowhere in the book will you find that this stands for Chassis/Body Unit which is not at all a common classification. One other niggle, the book was released in the fall of 2021, meaning at a time when Covid-19 had slowed down everything . . . everything except the proofreader, if there even was one: typos abound. On the plus side, there’s an Index, unusual in a Veloce book and most welcome! 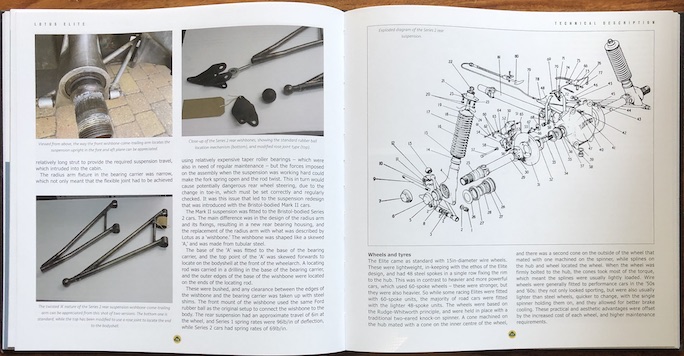 Peripheral to the book but an important data point Lotus scholars will want to have on tap: did Lotus sell the Elite at a loss, as is commonly reported? Vale’s source says no, and also explains why the CBUs are out of sequence.

At only $65 there’s really no reason to be on the fence about this book, and there hasn’t been a new overall history of this model in decades (the Bibliography here is current up to 2020!). Moreover there is quite a bit included about a construction modality of interest to anyone with a fiberglass car: unlike, say, a Corvette, the Elite used Glass Reinforced Plastic as a stressed-skin for the entire load-bearing structure of the car. (Definitely an item for the “what could go wrong” column, at least with the original vendor.) 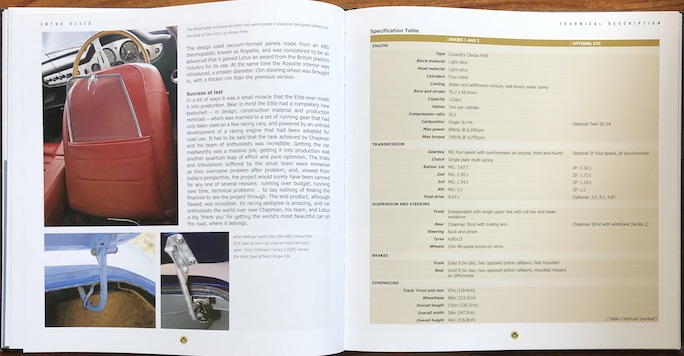 There was a later generation of Elites, 1974–82, but that was far removed from the original one so it is understandably excluded from this book. In fact it is not even mentioned, nor is the 2010 concept that was cancelled in 2012.

Vale’s has now written half a dozen Lotus books for this publisher, including Buyer’s Guides and a Source Book; since it’s still early in his retirement there are probably going to be more, if he can tear himself away from his various restoration projects!

Sam’s Scrapbook: My Motorsports Memories »
« A Clearing in the Distance: Frederick Law Olmsted and America in the Nineteenth Century