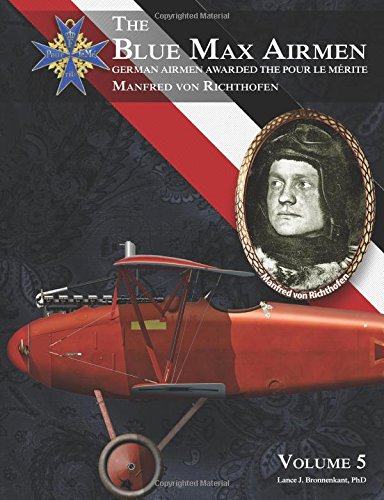 “I was not particularly eager to become a cadet, but my father wished it, and I was not consulted.”

On the one hand, if you came across the keyword “Richthofen” in a literature search, this unassumingly slim volume might not stand out from the dozens of books and hundreds of articles on this poster child of German WWI aviation.

On the other hand, the name of the author would raise the expectations of those who consider themselves in the know because Bronnenkant is an important figure in the League of WWI Aviation Historians, which is the cradle of WWI aviation history in the United States (a US version of the UK’s Cross & Cockade). Founded in 1985, the League publishes the outstanding journal Over the Front, and Bronnenkant its Managing Editor. In fact, many people associated with this book, including the publisher, are League members and activists so you can be sure that people who write for an audience of primarily peers cannot afford to offer pablum.

This book, volume 5 of an ongoing series, does not disappoint but it doesn’t tee off in a way that immediately makes clear that it actually adds something new to the record—not so much heretofore unknown facts (although there are new photos, or at least old photos cropped differently to reveal more context than in previous iterations) but new interpretation and extrapolation.

The former pertains to excerpts of von Richthofen’s (1892–1918) own writings that are so distinctly critical of the war in general, and his 1917 (and posthumously 1933) autobiography Der Rote Kampfflieger in particular that one is forced to surmise that had he lived longer, he would have become an embarrassment to not only the regime of the day but also deprived decades later Nazi propagandists of fodder. In fact, German national self-image at large drew inspiration from a valor, patriotism, and unquestioning sense of duty that Manfred Albrecht Freiherr von Richthofen surely did once possess—but began to question. Consider the dichotomy between the man with whom the Kaiser lunched and of whom his mother wrote, “He’s in all the newspapers, everyone is talking about him; a banner waves above his name. Cities honor him, royalty send telegraphs.” and the man who, burdened by the carnage in the field and the political grandstanding, only months before his death records in his diary, “I write this down without knowing if anyone other than my next of kin will ever get to see this . . . When I read the [autobiography], I smile at how flippant I was. Now I no longer feel so flippant.”

Despite the fact that so much has already been written about von Richthofen, quite a bit remains unknown—even who exactly shot him down. Early on Bronnenkant himself describes his book as “largely a synopsis of the decades of work performed to date” and directs the reader to seek out such sources, especially fellow Leaguers Peter Kilduff’s 1994 Richthofen: Beyond the Legend of the Red Baron (ISBN 978-1860199905) and Robert Forsyth/Jim Millers’ 2009 Manfred von Richthofen: The Aircraft, Myths and Accomplishments of the Red Baron (ISBN 978-0955597732), both easily found.

After setting forth biographical highlights and particulars about von Richthofen’s military service, in particular the aerial victories that earned him the Pour le Mérite, Bronnenkant discusses the aircraft. Here too we find nuances regarding such minutia as color schemes (the red, for instance, not nearly as bright as often depicted) ably dispensed by Greg VanWyngarden, a leading expert in aircraft markings.

Appended are lists of all Blue Max winners by, first, date and then in alpha order and there is an Index, Bibliography, and Glossary. What is not at all discussed is the convoluted history of Prussia’s highest order of merit itself (nor the origins of the Blue Max moniker although the book does contain useful if speculative commentary about the red color of many of the Red Baron’s aircraft.)

Also contained is one Errata item pertaining to a misidentified photo in vol. 3.

In short: a book to have, both for the novice and the expert. In fact, if WWI aviation is your area of interest ALL the books by this publisher ought to be on your shopping list! As to this particular series note that not only will all 81 Blue Max recipients be covered (von Richthofen was the 14th) but a second round will deal with the additional 27 nominees. At two volumes a year this will take a while, and this specialist publisher has a number of WWI (and some railroad) irons in the fire at any time!

Lamborghini: At the Cutting Edge of Design »
« Glamour Road