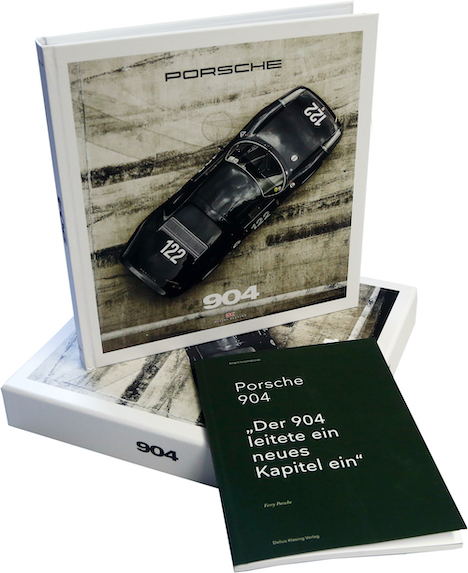 “The Porsche 904 can be referred to as an aesthetic masterpiece without much opposition from design experts. Its young creator received plenty of praise for it and the car secured him his place among the major designers for eternity. Meanwhile, things were going anything but easy for the young designer, only 27 years old at the time. The entire automotive world expected nothing but a stroke of genius from Ferdinand Porsche’s grandson and Ferry Porsche’s oldest son.”

(German / English) Launched in 1963, the Porsche 904 Carrera GTS was a true dual-purpose car. Its main purpose in life was racing but it was fully usable on the road. In fact, private owners often drove their car to the track and then raced it, something Porsche made much hay of in its advertising. 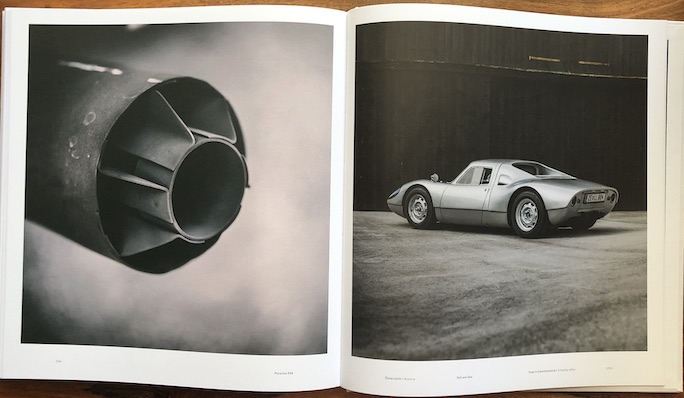 The 904 was successful, looked sharp, and came at a crucial time for Porsche. Odd, then, that so little is being written about it unless it’s because barely more than the number of cars required for homologation was built. It’s coming on 20 years since the last proper monograph, 2003’s Porsche 904: The Complete Documentation, Development, Evolution, and Vehicle History (ISBN 978-3898801157) by Jürgen Barth (Le Mans winner and Porsche customer sports coordinator), Patrick Albinet, and Bernhard Weigel. Look at the subtitle; if that’s what you need to know about the 904, then that is your book because this new one is an entirely different animal. It is primarily a photo homage with minimal text, accompanied by a separate Fact Book containing the narrative, the former a large-format hardcover and the latter a small softcover booklet, bundled together by an unusually shaped rubber band into a nice presentation box. 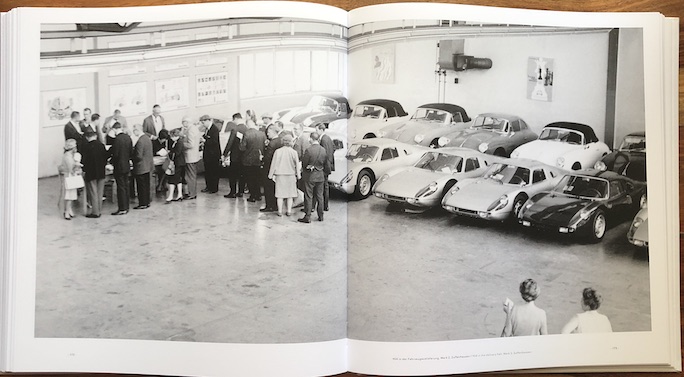 This photo is taken at Porsche’s delivery center but these folks are not customers—note their age, and that many are couples—but dealer principals during a Spring 1964 launch event.

German publisher Delius Klasing has done other Porsche books in just this format; the fact that they are aimed more at the bibliophile than the historian is in no way a demerit. Besides, just like many of their more conventional books, they are produced in cooperation with or even at the behest of Porsche AG. 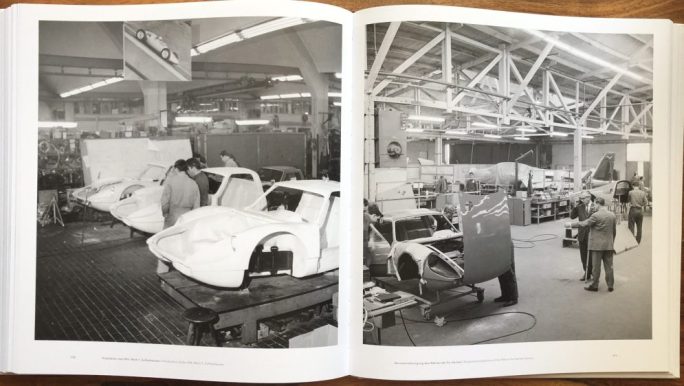 Jet fighters being built side by side with Porsche race cars??

The 90-page Fact Book may be small (and smaller when you take into account that it is bilingual) but for the reader who mainly wants an overview/introduction it’s just right. Written by Porsche expert Jürgen Lewandowski it explains the lay of the land at the time the idea for the 904 was hatched: changing racing regs, small budget, Porsche looking for the next big thing both on the road car and the competition sides, supply bottlenecks with the concurrent 901/911 project. 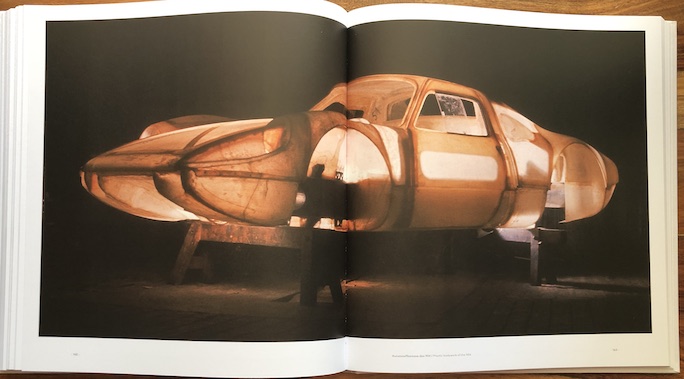 Here’s another way to win your next 904 quiz: What is Adralit? 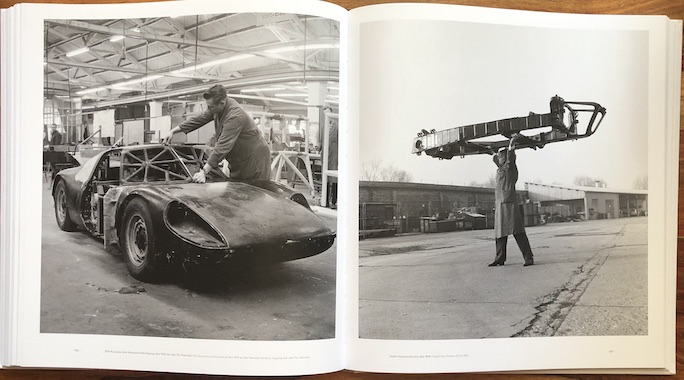 Necessity being the mother of invention is how the 904 came to be the first Porsche with a plastic body and the Fact Book goes almost unexpectedly deep into how that solution was conceived and executed, to the point of actually describing the layering of the resin mats (wherein lies the explanation for individual bodies having slight differences in weight, with all the attending problems for race prep). In other words, anyone who has a fiberglass/GRP car will discover something useful here. Something that is only touched on in passing is that the 906 used Lotus suspension parts—just imagine the arguments you can start with this one. Speaking of arguments, the Fact Book pegs the total number (904, 906, 908) built at 112. 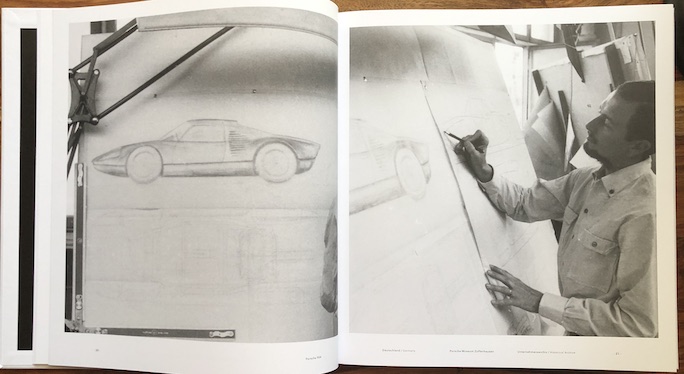 If the 904 is a piece of the puzzle in Porsche history, it needs to be connected to the earlier 356 and on the racing side to the 718 thanks to whose race-proven shape the 904 was able to do without time-consuming and expensive wind tunnel testing and go from drawing to showroom floor in an astoundingly short six months. The Fact Book connects all those dots, and many more. It has, however, neither a Table of Contents nor an Index so you’ll just have to read it cover to cover. 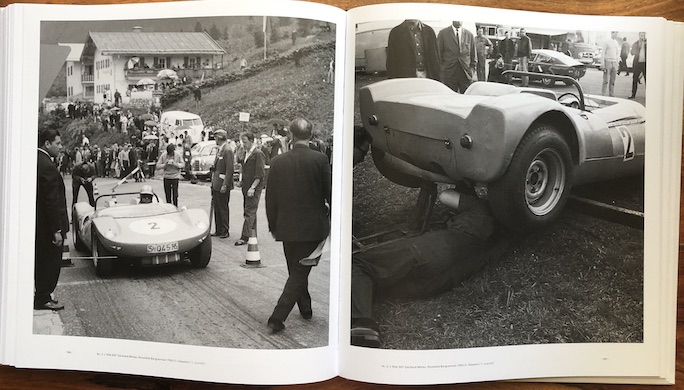 The race coverage is extensive enough to give a good sample of how capable a car the 904 was and the photo selection is superb. 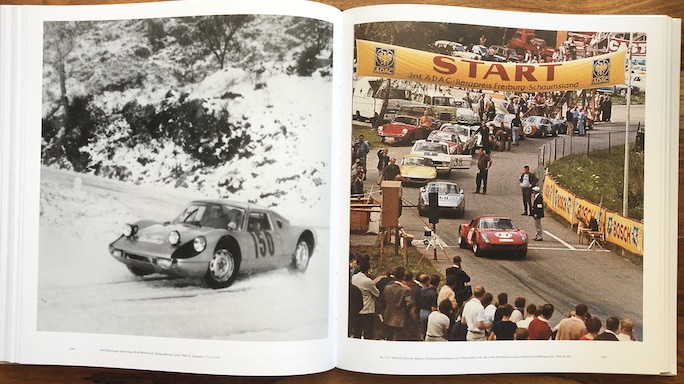 It wouldn’t be good form to look a gift horse in the mouth, and a foreign-language edition really is just that, so let’s just say that the translation isn’t always always totally on the money in terms of word choice or syntax (cf. “[Butzi P. being] an early-ripened genius” is not an expression a native speaker would use). And there are a few straight-up typos, which is more a proofreading than a translation issue (cf. knowing when to use “of” v “off” or “in” v “into”). Lastly, each of the languages ends with a Bibliography—but it is the same in both cases, meaning the English version does not list English editions if they are available. 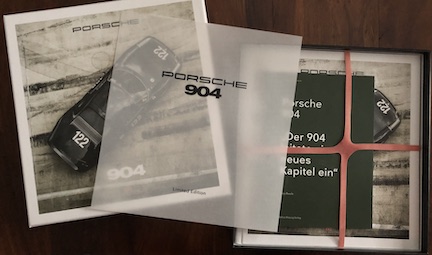 The square-format photo book is of course intended as the main attraction. Just opening the box is an event. (If you buy it second-hand, make sure it is not missing the loose “Limited Edition” sheet!) Divided broadly into topics, each with some introductory text, the book opens with a selection of race/event posters and a lovely cutaway that, while large, leans more towards the artistic than the clinically technical, and there are several design sketches and a dimensioned construction drawing. A 1964 road test (in German) is reproduced, select individual chassis are presented, international sporting highlights shown (captions state cars, people, events, years) and then there’s a long section showing the 904 during construction, not just at Porsche but Heinkel aerospace where the bodies were made. There is more, and this list is not meant to be exhaustive but to make the point that there is a lot being covered. 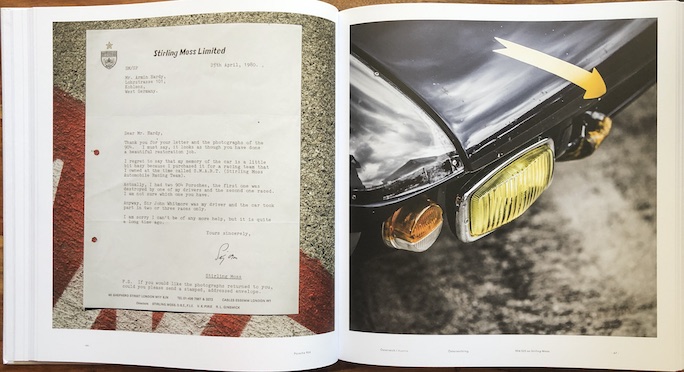 This is totally peripheral to this book but a perfect illustration for why reading outside one’s hyperspecific area of interest can be illuminating: you could read all the biographies of British racing driver Stirling Moss and still not have a fully formed picture of the man’s miserliness with money. This 1980 letter leaves no doubt. It is a reply to someone who bought and restored one of the two ex-Moss 904’s and had asked for race history. Moss closes with this PS: “If you would like the photos returned to you, could you please send a stamped, addressed envelope.” Sad, really.

The well chosen photos are archival, from a variety of other sources, as well as contemporary (including Stefan Bogner’s always-impressive studio work), printed on substantial paper with a fingerprint-friendly finish and ink.

So, to say it again, understand—and appreciate—what this book’s intentions/purpose are. It totally has its place, it is a lot of production value for the money, and just handling it will brighten your day.

Incidentally, a 904 was relatively cheap for a race car back in the day—around $7400. A good one today goes for $1 million and more depending on spec and race history which is why there are some very decent replicas being built.

Faster, Higher, Farther: The Inside Story of the Volkswagen Scandal »
« Sam’s Scrapbook: My Motorsports Memories