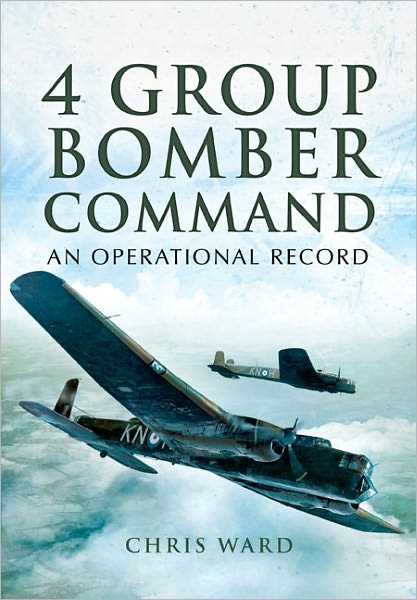 As Ward’s previous books about 3, 5, and 6 Group, this one covers a highly specialized subject matter, more so than his several books about the famous Dambuster Squadron (all for the same publisher). From individual squadron statistics, commanding officers, stations, aircraft losses and sorties an operational history, of necessity, involves reams of data and the sort of minutia that mostly a former member or today’s, and even more so tomorrow’s, historian (as Ward himself is) would be interested in.

Despite being formed on an April 1st (1937), the vital and critical role 4 Group’s squadrons played in the aerial offensive against Germany and Italy is anything but a joke. Its mission ended pretty much where it began, the Frisian Islands and Heligoland but it went from dropping leaflets to a record total of 3,620 bombing runs in 22 operations during August 1944.

The book is divided into two principal parts. The first 111 pages contain a detailed history of Number 4 Group and its component squadrons as it was built up prior to WWII, its war record, and ends with the final bombing raid on April 25, 1945.  The early missions in September 1939 of carrying millions of propaganda leaflets and drop them over Germany was naively dictated by concern for damage to Germany’s civilian property and possible reprisals! That attitude would soon change.

These early excursions employed Whitley III and Wellington twin-engine bombers. Sadly, the Whitley’s performance was totally inadequate for the task, the aircraft was underpowered, engines were unreliable, and the crews suffered from hypothermia, particularly during the first winter when temperatures were uncommonly low. Low cruising speeds led to night missions of ten hours’ duration or more and lack of navigational aids added to operational stresses.

At the outset of war, Bomber Command did have one quite effective bomber that was already in service, the Vickers Wellington. It was designed and built on the geodetic principle. This allowed the aircraft loads to be distributed efficiently around the aircraft’s structure and thus it could take significant amounts of battle damage and still remain airworthy. The Wellington did sterling service and was not totally replaced until July 1943.

The remaining 172 pages contain a huge amount of detail, lists of commanding officers, squadron histories, the airfields and, to the extent possible, even details and histories of each squadron’s aircraft.

Most people associate Bomber Command with the well-known Lancaster four-engine bomber. This particular part of the organization, 4 Group, was eventually equipped with the other British four-engine bomber design, the Halifax. Regarded as second-best to the “Lanc” in virtually every respect, later versions of the Halifax became pretty good performers and were liked by their crews.

Appended are two pages of RAF abbreviations and a three-page Bibliography. There is no Index. Eight pages of excellent b/w pictures showing some of the crews and their aircraft are bundled into a stand-alone section.

When all was said and done, Number 4 Group had flown almost 62,000 sorties and lost 1,441 aircraft during the war. In the whole of Bomber Command 55,000 aircrew lost their lives—a horrific sacrifice.