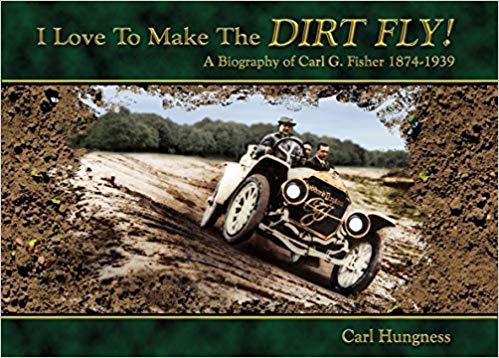 The well-chosen words and generously illustrated pages of I Love to Make the DIRT FLY! transport the reader back to the life and times of a man who was full of ideas. More importantly, Carl G. Fisher was a man who walked his talk enabling him to turn many of his ideas and dreams into reality. A lot of realities in fact, the most notable of which are shown on the beautifully drawn endpapers of the book, for Fisher had a guiding hand in the creation of the Dixie Highway (today more a network of roads rather than one singular road/route, running from Canada to Miami), the Lincoln Highway (now Interstate 80), Prest-O-Lite, Miami Beach, and the Indianapolis Motor Speedway.

Author Carl Hungness has been immersed in racing since his earliest days, in the very late 1960s, as a journalist and your commentator has several of his earlier publications—annual Indianapolis 500 Yearbooks—on the shelves. Over those decades Hungness has come to know racing history as well as innumerable racing greats among drivers, team owners and team members. And as the Bibliography, Chapter Notes, Acknowledgements, and Photo Sources pages of I Love to Make the DIRT FLY! indicate, his own library, along with sources, resources, and contacts, has grown as well.

Hungness’ considerable knowledge and communications skills shine on the pages of this book. His words are not mere recitations of facts, dates and events but flesh out the man and his various partners giving the reader a sense of their personalities, their strengths, and their weaknesses, imbuing each with life.

Your commentator did as Hungness suggested in his Preface and began reading at the back of the book for there he wrote and placed two chapters in an Historical Background Section. These set the stage, as it were, putting the reader in the world Carl Fisher experienced and to which he would subsequently heavily influence changes. One chapter deals with the very earliest internal combustion engines and the spindly nascent automobiles they powered while the other describes the most prominent mode of transportation during Fisher’s earliest days, the bicycle, from high-wheelers to finally the safety bikes.

With the scene set, the pages narrating Fisher’s life read quickly. As his reach broadens with the Lincoln Highway project spanning the nation east to west, his fascination with Florida taking him into the south, the numbers of friends, associates and acquaintances increase to include some whose names today are imminently recognizable. Pages fill with Fisher’s correspondence exchanges and photographs with the likes of Will Rogers, Eddie Rickenbacker, President Warren Harding, William Vanderbilt, and of course racing greats of the day such as Barney Oldfield, Ralph DePalma, boat designer Gar Wood, aviator Glenn Curtiss, and more.

As a good biography should, Hungness also details the personal and family life of the man, including his lovely first wife Jane, their shared heartbreak losing a child, shared joys and pleasures in beautiful homes and Carl’s ultimate life-ending battles with alcohol and diabetes.

This commentator found Hungness’ book engrossing and pleasurable to read. And the period photos, colorized in the style of the times, the paper chosen, even the page layouts only enhance the reading pleasure. Well indexed, with chapter notes and bibliography making the book an easy reference source too.

This review appears courtesy of the SAH in whose Journal 292 (May/June 2018) it was first printed.

The First Beetle: Resurrecting a 1938 Prototype »
« Under the Spotlight