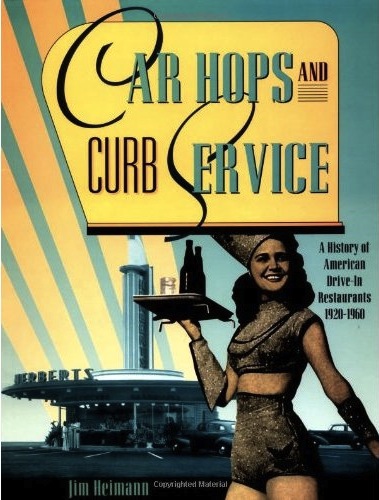 Teenagers finished off the drive-in! Read all about it!

Starting in the early 1920s and lasting for a good 30 years American entrepreneurs sought to capture the emerging, and later burgeoning, car culture with occasional gimmickry and always convenience, catering to the road-going public by allowing them to remain ensconced in their chariots. Drive-in or drive-thru banks, funeral parlors, wedding chapels—all variations on the theme of how not to separate man from machine.

After all, if the notions that drove motorists to the open road in the first place, namely the yearning for independence and personal freedom, could be extended beyond the car to the various activities associated with travel, there would be money to be made. First, by way of the drive-thru fuel station which quickly expanded to the full-service station and roadside market, only to evolve into a veritable gold mine, the drive-in restaurant. The latter is what this book explores, mainly in photos, with just enough text to tie everything together. Richly illustrated with ephemera of all sorts, period photographs and postcards, the book is indeed a pleasure to behold; well designed to the minutest detail. Chronicle books have a well-deserved reputation for inspired design; this one raises the bar much higher!

The casual observer will notice that the trend toward convenience has far from disappeared from modern commerce (witness the surge of online grocery stores and delivery services) though the drive-in restaurant and movie theater have all but disappeared. Heimann parades in front of us a time when the novelty of motoring was outdone only by the novelty of those trying to lure motorists off the road. Whimsical architecture, uniformed car hops, creative menus and menu items all spoke to the almighty disposable income. And unlike the popular image of being only teenage hangouts, whole families were courted. Alas, the demise of this unique cultural phenomenon was the same drive for profit and market share that created it in the first place, replaced by and large with another modern phenomenon: the mall. Perhaps there are volumes in the works about that, but it is doubtful they could capture our collective cultural mind with a grasp as tight as the one herein.