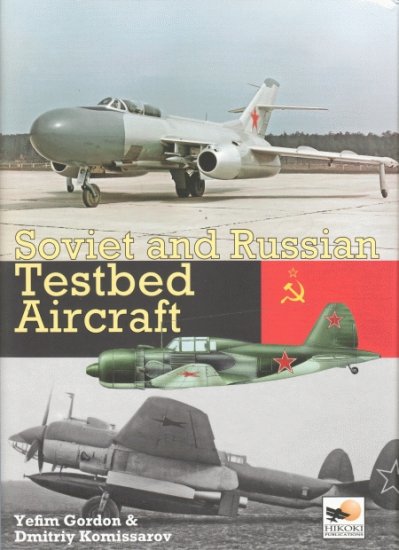 The title is clear enough but just to nip misunderstandings in the bud: this book is not about experimental aircraft in the sense of prototypes but rather the various bits of equipment that are carried aloft by aircraft in order to be tested, and the aircraft—usually specially modified, sometimes stock—that serve as “flying laboratories.” From ejection seats or radar to wing shapes and even entire propulsion units (think: rockets or the like), this book presents many of the Russian/Soviet vehicles used for such purposes since the 1930s. Unless this topic is your daily bread you’ll be surprised by almost everything in here!

It is, in fact, nothing short of surprising that so much about this unusual topic can be presented here at all, given the secrecy surrounding such projects no matter under whose flag they are conducted, and especially considering that the sources are in what we once called the Eastern bloc of whose military/technical activities much was rumored and little known for sure. It helps, naturally, that the authors are “locals,” Komissarov being from Moscow and Gordon from Vilnius. More importantly, both are widely published aviation experts, especially Gordon who has been researching Russian/Soviet aviation since the 1970s and has gathered one the largest archives. It is worth noting that Komissarov is a professional translator and produced the eminently readable translation of this book.

It does not deter in the least from the book’s usefulness to dwell briefly on what it does not contain. Intentionally, not “everything” known to exist is included here, primarily for three reasons: some projects are still classified, some fall outside the immediate scope of the book (cf. unmanned aerial vehicles), and, lastly, a monograph is not an encyclopedia. With that in mind, it is an unexpected bonus that the book does include converted imported aircraft. (Modellers who have grown bored with their kits will find here endless inspiration for modifications! Building some of the Russian craft is well nigh impossible unless you can build from scratch.)

The book is divided by application or “function.” Inevitably, there is the occasional dilemma here that one airframe may have been utilized to test a variety of applications, sometimes even during the same deployment. You’ll just have to trust that the authors used their best judgment which aircraft to stick into which category. These are: Aerodynamic testbeds (basically, wings), Aircraft Systems (while this comprises pretty much anything that makes an aircraft work it here is limited to refueling apparatus, landing gear {rather exotic: air cushion skirts}, control systems, ejection seats, de-icing, boundary layer control, aircraft carrier technology, recovery systems), Propulsion, Avionics, Weather Research, Geophysical Survey, and Miscellaneous (environmental research, agriculture, parachutes, stealth, accident investigation, space vehicles). Flight-test installations are mentioned throughout where relevant but the information is too scattered to paint a cohesive picture.

Within each category, aircraft are described in alpha order by maker and within that by type. The latter is by default in chronological order because type designations are, mostly, issued in ascending order. Internalizing the two-page Introduction is essential for understanding nomenclature and conventions (seemingly less capricious than the US system); it also explains the differences the authors see between a testbed and an experimental aircraft.

Many of the plentiful photos have not been seen in the West before; they are well captioned and reproduced but not credited. Not every aircraft described has a visual and the depth of the text coverage varies considerably. Several dozen color side view technical drawings by Aleksandr Gavrilov are augmented with b/w technical line art or 3-views; they are not to scale and no dimensions are given.

The Index is subdivided into aircraft type (further breaking out non-Soviet craft and bombs/missiles), engines/motors, locations/bases, NATO names (very useful!), and Design Bureau (OKB) numbers. There is, however, neither a general index nor one of proper names.

No one book in the West covers the subject in this breadth or so accessibly. There is certainly more depth to be had but that would probably be important mostly to specialists and they’re likely to have other sources anyway. Like all Hikoki productions, this is in every respect a properly put-together book—paper, binding, proofreading—and will earn its place on your bookshelf many times over and is an ideal and essential companion piece to this publisher’s other flight test titles.