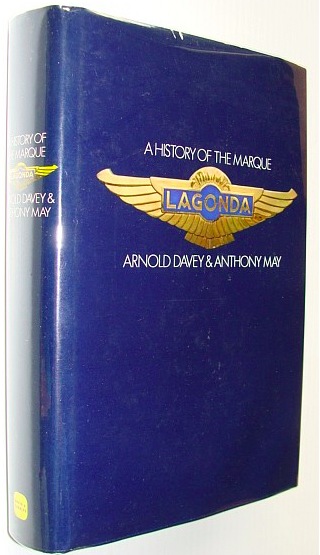 Any British car manufacturer that survived into the modern era, yet is named for a small river on the outskirts of Springfield, Ohio (itself a French corruption of the original Shawnee American Indian tribal Ough Ohonda, describing the tortuous course of the river as resembling buck’s horns) must be at least interesting, and very possibly quirky. That nature of the Lagonda Company is perpetuated in Davey/May’s book, and this reviewer can still recall delightful passages from the copy borrowed from the library over 30 years ago.

Wilbur Gunn was born in 1859, the son of a Methodist minister, and after an apprenticeship with the Singer Sewing Machine Company he abandoned his wife and daughter in Springfield for a life in England which seems to have involved engineering and singing, in equal measures. By 1899 he had established an engineering business at Staines in Surrey, remarried, and lived comfortably in the house his wife owned.

In the glasshouse there he started to build engines, which he attached to bicycles, and from this he expanded into building motorcycles and tri-cars, as well as commercial vehicles, using his own and other manufacturers’ engines, in sheds that gradually took over more and more of the lawn. By 1907 Gunn and his staff were building cars with twin-cylinder engines, followed by 4-cylinder engines built by Coventry-Simplex, while Gunn continued his active competition career on and in his products.

Possibly because of his expatriate background, Gunn had in mind the potentially lucrative Russian market, and competed in the 2,000-mile St. Petersburg Trial, which finished its tortuous run through provincial towns at Moscow after daily runs of about 200 miles, with accommodation in an accompanying train. Gunn accepted the challenge to return the 400 miles to St. Petersburg in one day, which would separate many competitors’ equal results, and this he achieved in 12 hours to win a gold medal, as well as a certificate presented by the Tsar to Wilbur Gunn. An agent in Russia was appointed, and a thriving export trade lasted until the Great War.

During the war Lagonda made armaments, and Gunn worked so hard that he died soon after the war ended, but by that time the Lagonda light cars, with an early form of unified chassis and body, were well established. Always of high quality, Lagonda moved gradually “up” the scale, so that by 1935 they had offered a confusing array of models, won the 24 Hour Race at Le Mans, and been placed in receivership.

Arnold Davey wrote the pre- World War II portion of this book, and most pages induce a smile or even a laugh; is there another one-make car history book that has done that? Quotes at random (page 118) “There survives from . . . 1924 a spare parts list for the 12/24 . . . It was clearly expected that the majority of orders for parts would be sent by telegram and to this end every part, down to the simplest washer, was given a telegraphic code name, from five to ten letters, of which the first three or four refer to the major component . . Thus it would clearly be cheaper when telegraphing for a part to refer to ‘Oilepuce’ rather than its full name of ‘Outside oil pipe to crankcase and overhead motion’ . . . The frivolous-minded, like the author, can invent unlikely but possible messages that could have reached ‘Lagondy, Hammer, London’ from the outposts of the Empire. How about: ‘Send Tilley Sundey Garlic Passion Car 4000’. ‘Tilley’ was the code word for the steering column inside tube, ‘Sundey’ was the under-shield for a coupé, ‘Garlic’ a gearbox selector-rod sleeve (top to second) and ‘Passion’ meant the requested goods were to be sent by train and would be collected.” Or this from page 320: “There was a customer who had his 4½ stippled all over with roses and another who had a flight of ducks appliquéd to the sides of the car with the beaks of the foremost ducks forming forward extensions of the windscreen pillars. He also had a chauffeur who doubled as a bodyguard and I am not surprised.”

The postwar history of Lagonda is covered by Anthony May. Reintroduction of the prewar models was not possible because the jigs had been destroyed, and Bentley seems to have had a good idea of what would be practicable in a new car, which he and his team worked upon during 1944, so that it was able to be described in The Autocar in September 1945. Its 2.6-liter six-cylinder engine had twin overhead camshafts, and the publicity attracted many orders for this innovative new car, but after the new Labour Government introduced a tightly controlled quota of raw materials, sufficient only to build 100 cars, the bodybuilder Briggs declined to commit to this uneconomic figure. The industrialist David Brown, who had just bought the Aston Martin Company, bought the assets of Lagonda in 1947, these including the name, drawings, records of development work, spare parts stocks, and the three prototype Lagonda LB6s. The site at Staines was not included, and Lagonda joined Aston Martin at Feltham, Middlesex. W.O. Bentley elected to not make the move, and established a design consultancy at Weybridge, Surrey. His last great design, that Lagonda engine, powered the next few generations of Aston Martins and Lagondas, and he could see his legacy carried on to the V8 engines subsequently built. Lagondas have been built in small numbers in recent years, but since Aston Martin intend to put the Lagonda badge on the next generation of four-door saloons, we may look forward to another era when Lagondas will again provide a competitor to Bentley.

This book was written at a time when it was still possible to gather first-hand accounts, and research for it had been proceeding since 1951, when the Lagonda Club was reorganized to merge two prewar organizations. It is of course a product of its time, with few illustrations, and none in color. The paper is of good quality, and unlike many old books, which are redolent of elderly cats, it has lasted well, being strongly bound. It was expensive when new, explaining your reviewer having to borrow it from the library in the early 1980s. Published now, there would probably be many pretty pictures, weak binding, and typographical errors.

If you are able to find a copy at a reasonable price, you will not be disappointed. They can be found nowadays for around S25.