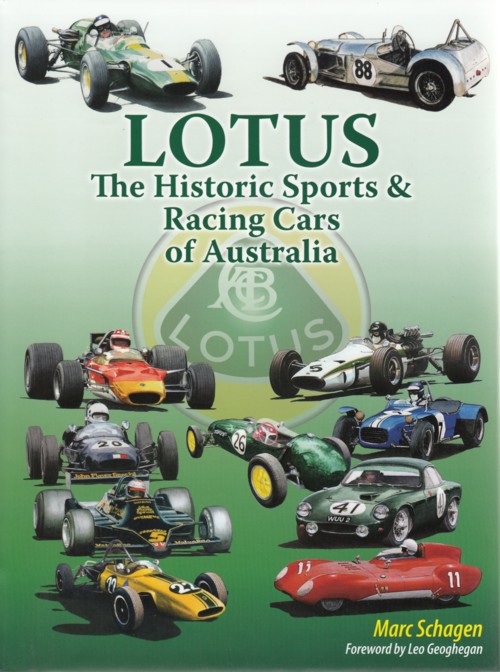 “I have always been concerned about the number of cars we have lost from our shores and that is the principal reason why it took me so long to decide to write this book. I did not want it to become a shopping list for overseas collectors to ‘poach’ our cars . . .”

Considering the detail this “field guide” contains and how it is organized it is easy to share the author’s concerns! From chassis numbers to ownership data, it’s just the sort of thing you’d need to Find Waldo.

This book—this sort of book—is not the kind of stocking stuffer one would buy for the general car enthusiast, or even the general Lotus enthusiast. It is the racers and racing historians who’ll wear out their copies, or would if the book weren’t so well bound and printed (a ribbon bookmark even, and green—someone clearly thought about the details here).

Let’s look at the fine print first: from kit cars at the amateur level to all-out F1 machines all series of competition sports and racing cars that came to Australia from 1955 to the late 1970s are covered except the Cortina and Twin Cam Escort (both numerous in their day but now rare enough for replicas to complicate their histories) and on the sports car side nothing about the Elise, Esprit, and Exige.

Many, many years in the making, the book came out in 2012, one year before the 50th anniversary of Lotus winning its first constructors championship. It owes its existence to the author’s father, Adrien, who became a Lotus Elite owner in 1961 (today owned by the son, who was born that year) after cutting his teeth as a racer on MGs and Healeys. So taken was the elder Schagen with his Lotus that he became a founding member of Club Lotus Australia (CLA), acted as secretary of several of its registers, bought a few more Lotii, and also made a name for himself as a restorer. Moreover, for decades he collected “virtually everything in print” about the Lotus scene in Australia, a pastime that became an avocation and which also appealed to his son who too is a club-level racer, register secretary, and data gatherer whenever he gets away from his day job as a long-haul trucker.

This book should, and will, inspire others to do something similar for their marques or clubs but the reality is that if the Schagens hadn’t started collecting data decades ago, it would be nigh impossible to reconstruct the story accurately now. This is especially applicable in regard to the Lotus 7 of which, being easily duplicated, there are so many replicas that “it is sometimes very difficult to separate them from the real thing.” Having known the cars and their often multiple owners for a long time, the Schagens are able to amend or even correct the owners’ oral histories on which much of the book is based. Oral histories are, naturally, a primary source for the researcher . . . but memory is a fickle thing. The author himself is not immune from this, and without wanting to make elephants out of molehills, we note that he gives the year of acquisition of his own Elite as both 1998 (p. VI) and 1997 (p. 68), which is why, as Lotus racer/dealer Leo Geoghegan points out in his Foreword, “the publication will settle many bar-room myths and create a batch of new ones!”

That Foreword is rather more about the Geoghegans than the Schagens but it says one thing that would make mercurial Lotus founder Colin Chapman nod approvingly: (realize that Lotus cars went to Australia in kit form and therefore came with precise instructions for assembly, specs, compatibility of parts etc.) “It was very noticeable that the buyers that adhered to this information were successful, and the ‘fiddlers’ quickly moved from the front of the grid to the rear!”

Lotus series 6 to 79 are presented in order of type number, then chassis number, usually one to two per page and all accompanied by at least one and usually several photos. Many/most of the photos are new to the printed record but, except for chapter openers, are quite small.

Readers from OZ and NZ will surely recognize quite a few names, international readers will probably only recognize names of the magnitude of Clark, Hill, Moss or the like. If cars had a meaningful international competition history it is presented as well. The data is current up to the time of publication, 2012.

For a privately published first-time writing effort, this book is a splendid accomplishment (typos and a few layout stumbles notwithstanding) and for the reader the low price makes it an enormous value.

More Than Automobiles: The Packards of Warren, Ohio »
« The Road to the Top is Not on the Map