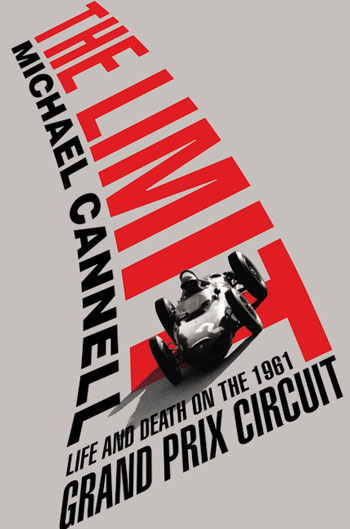 Probing the limit of the performance envelope of man and machine is the race driver’s daily bread, and for some their very purpose in life. The era this book examines was rife with tragedy, and while 1961 was not by any stretch of the imagination the worst year, the very fact that it revolves around only a small number of banner figures makes it an easier story to tell than, say the 1955 Le Mans accident that claimed over 80 lives and is still today not fully understood.

Cannell, a journalist who covers sports and house/home subjects for newspapers and magazines and has penned a 1995 biography of architect I M Pei, here presents the story of Ferrari teammates Phil Hill (USA) and Wolfgang von Trips (Germany) that ended in the death of the latter and the bittersweet win of the 1961 GP championship for the former.

Readers familiar with the literature will quickly make a comparison to Robert Daley’s The Cruel Sport (also Cars at Speed). In fact, Cannell attributes his own interest in this subject to finding a copy of Daley’s book on his newsroom desk at The New York Times, the paper for which both men worked at different times. Specifically, he was struck by the photos which makes it all the more of a pity that he didn’t/couldn’t include more here.

From CBS to Publisher’s Weekly (not to mention Kirkus Reviews, “The World’s Toughest Book Critics” ℠. Can you hear me laughing?), everybody and their brother has featured or reviewed this book, and—in the non-racing community—heaped praise upon it. And there is much to praise. It is a fine read, makes the subject approachable, and vividly captures the flavor of the time. In broad strokes, it does its subject justice and you will thoroughly enjoy reading it and not regret the $26 it’ll cost you.

But it is in the micro detail that objective problems lurk. The genre for this book is “novelistic nonfiction.” If that meant adding meat (dramatic embellishment) to the bone (fundamental facts), all would be well and the review could end here. Alas . . . the reader who expects to be able to quote with impunity statements made in this book does so at his peril. For a book with documentary ambitions, getting actual, testable facts wrong invites trouble.

Now, while a fact is a fact—and none should be wrong or ambiguous, either out of carelessness or ignorance—not all facts are equally important to a specific context. Examples: In this story, it is important to know who raced what, when, where, on whose team, against whom; it is not important whether Grace Kelly drove a Mercedes 190 or a 300 in a movie; it could be important if a part is riveted or bolted or welded; and it does influence the reader if the protagonists are presented as rich/poor/mean/naïve/egotistic. Will it play more on your sympathies if, for instance, Phil Hill is portrayed as a “lowly mechanic” from a “broken home” or as a well-off youngster who could buy British sports cars and whose father was a pillar of the community? On all of these counts and more, the informed reader will be stopped in his tracks—while the novice reader will sail right on by. If Cannell were merely a contrarian, i.e. looking at known facts in a manner that offers an interpretation that plausibly makes a case for deviating from consensus opinion, fine. But what if he is simply too much of a non-specialist to really have a good grasp of the nuances?

Cannell makes several disclosures, both in the book and in the many, many interviews he has given and so we will use his own words rather than ours to paint a picture. That he considers himself “an unlikely person to write a book about car racing” because he doesn’t own a car (not uncommon for a New Yorker) is neither here nor there. It is also not unexpected for a professional journalist to say “I believe that a good reporter can write on any subject if they do their legwork.” (Pei, the subject of the aforementioned architecture book, did not agree with this notion!) In the Acknowledgements Cannell credits a slew of people who helped, from grammarians and photo researchers to marketers and “a number of motorsports historians.” The plot thickens, he did do his legwork and consulted motorsports experts—but it is one thing to get a general tire-kicking brief ahead of the writing and another to seek an in-depth manuscript review or fact-check at a later stage. Therein must lie the explanation why some of the very people whose help he acknowledges are the ones who now grumble about the book instead of writing glowing reviews!

People to whom meticulous scholarship is paramount will immediately wonder if the book was rushed into production, or “story/drama” was allowed to trump “fact/research,” when they learn that the movie rights to this book (optioned by actor Tobey Maguire [Spiderman] who intends to play Phil Hill; screenplay by Anthony Peckham [Invictus]) were sold before it was even printed, all in an effort to beat a rumored movie adaptation of A J Baime’s book Go Like Hell and director Ron Howard’s Niki Lauda/James Hunt movie Rush (Tom Rubython’s recent book In the Name of Glory – 1976 – the Greatest Ever Sporting Duel) to the box office. Or that this publisher’s mission statement is to champion [only] those projects that “have the potential to sell at least 50,000 copies in [their] lifetime.” For a motorsports biography, this would be an absolutely staggering, likely unprecedented number.

Do you get bent all out of shape that the book/movie The Right Stuff contains factual errors or are you absorbed in the story? The answer to that will affect what your limit about The Limit is.