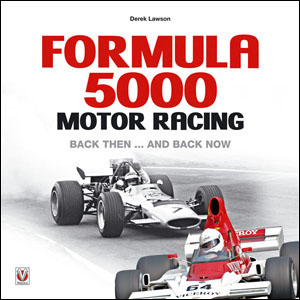 Inspired by the success of the Can-Am series with its unlimited formula and powerful V8 engines this initially low-cost racing series for cars with a maximum engine capacity of 5L attracted many of the names we would recognize from the “big leagues.” First run in the US, in 1968, F5000 would also lose its appeal here first, by 1975, due to rising costs and the advent of Lola domination. The series continued elsewhere in the world for another several years, especially in the UK—and that’s what this book is about even if the title won’t tell you that bit of detail. Despite an American F5000 car on the cover, and despite the fact that this open wheel, single-seater racing formula was run in different series in various regions around the world from 1968 to 1982, and despite the promising beginning of the book in the form of an Introduction that summarizes the series’ international dimension, the book is really only about F5000 in the UK and Europe.

The “Back Now” part of the title alludes to the fact some of the old cars took to the track once more in 2003 as part of the Formula One Race Car Entrants (FORCE) package. The launch of the Derek Bell Trophy the next year, backed by the UK’s Historic Sports Car Club, saw an even greater number of the old cars returning to the circuits on which they had once run. Formula 5000 celebrated its 40th anniversary in Europe in 2009 and as recently as the 2010 F1 Australian Grand Prix in Melbourne F5000 cars made an appearance in a support race, their final of five rounds that season.

Beginning with the inaugural race in the UK (1969) the book devotes one chapter each to the seasons up to and including 1976. The race commentary highlights key moments and personnel. There is no specific technical information about the cars other than in the form of general background in regards to rule changes etc. These chapters each contain a table summarizing that season’s top 10 results by driver, car, engine, and points. This part of the book concludes with a few sentences about the 1977 and subsequent seasons, and then picks up the thread in 2003/4 and quickly winds down over the space of about 30 pages in 2007.

The book is quite well written: fully fleshed-out thoughts, a sense of progression, with an obvious interest in the subject. The author, by the way, is a marshall at Oulton Park and in training to become its Clerk of the Course. The photos are almost exclusively of cars on the track. To say that probably most are taken by amateurs (all photos are attributed) is not to imply a deficiency but merely to point out that [a] they are straightforward in composition and technique with a sort of snapshot “I was there” quality which [b] means they are mostly new to the record. Photo captions are on the brief side and while they identify the driver rarely say anything, and certainly nothing terribly meaningful, about the cars. (“Australian Vern Schuppan was good to see as well.” Gripping.) There are four pieces of line art of race cars, two of them on the endpapers. They are not attributed and are quite accurately rendered in terms of detail and proportion, and even if they’re only PhotoShop manipulations of actual photos quite well done.

The Foreword by Brian Redman mainly talks about random events during the F5000 phase of his career and otherwise shows—again—how not do to do forewords: it provides no insights into the topic as a whole and twice he resorts to guesswork in reference to historic events in which he himself participated. How hard can it be to look it up and get it right?! The Index only lists people.

After much head-scratching one is moved to say that the book could be, ought to be more. Despite the all-encompassing title it is of rather narrow focus. Certainly for people who witnessed the races described here the book will bring back meaningful memories and it serves that purpose singularly well.