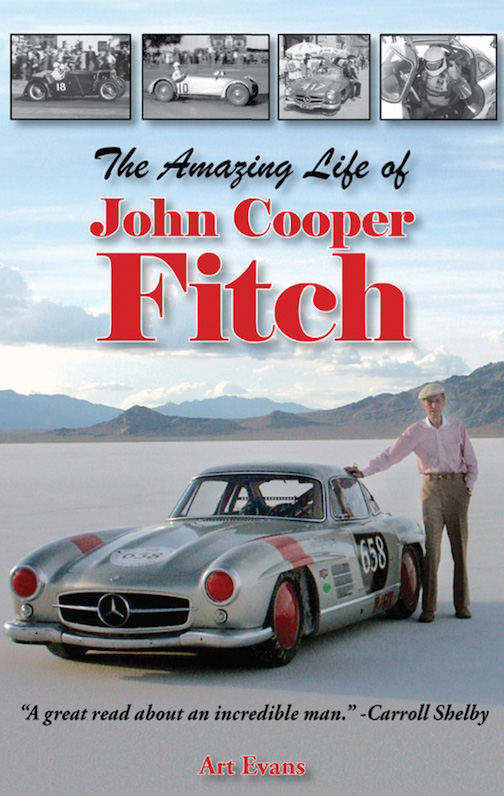 We have all seen books written by people who appeared to be at arm’s length from their subjects. Their work has the words but not the music. But here is one where the author was a longtime friend of the subject, saw each other at races, went sailing together, went to the Bonneville Salt Flats together and generally palled around. This is the ideal way to create a book.

But that’s not all, because Evans was also a racing driver himself, in West Coast events at the wheel of a Jaguar XK120 and a series of Devin-bodied cars. He is also the author of eleven other books on motorsports history.

A clean, chronological organization makes it easy for the reader to move along in the book, beginning with the first steamboat designed by Fitch’s namesake in 1785, well ahead of the steamboat of Robert Fulton. The reader learns that John-the-racing-driver, believed to be the sophisticated Easterner, was actually born (1917) in Indianapolis. Well, the corn is better there.

Wanderlust in his teens and early twenties covers adventures with an Indian Twin motorcycle, a Fiat Topolino, on a Dutch freighter and on an MG Magnette, which led him to the Brooklands track and his first exposure to road raceing. Evans employs a clever substitution of photos to illustrate a brief race between the Magnette and a BMW. He finds, instead, a picture of Stirling Moss in a BMW 328. When you’re 23 years old, it’s sometimes hard to get your hands on a camera.

The approach of another war in Europe in 1939 sees John back in the US piloting a 32-foot wood-hulled sailboat on sub patrol in the Gulf of Mexico. Evans notes some interesting juxtapositions as Fitch joins the Army Air Corps in April 1941, eight months before Pearl Harbor. On December 7 he was attending the Army-Navy football game with his stepfather. At the end of the game, and not before, everyone in uniform was ordered to report to their unit for orders.

Many interesting aspects of Fitch’s experiences in the war are detailed in Evans’ prose. Fitch’s P-51 test flights, shooting down a Messerschmitt Me 262 jet, blowing up German supply locomotives and three months in a wartime prison camp are all described. On his return to the US he meets the Kennedy family. Sitting around a pool and trading war stories with Jack Kennedy, he suggests that the young man get into politics. Evans is describing what an interesting character Fitch is and he’s only in his early twenties.

The book has a number of pictures seldom if ever seen by anyone, such as the image of the wedding reception for John and Elizabeth. John is dapper in a white summer jacket and Elizabeth is wearing a white lace halo—a beautiful couple. There’s a photo of Fitch at Sebring in the Coby Whitmore Jag 120, in front of the pit counter. But look in back of him. It’s Elizabeth!

A ground-floor introduction to Briggs Cunningham and his racing team follows as Fitch’s absorption into motorsports continues. We learn of the team, not only of Fitch. And so we meet Phil Walters, George Rand, Fred Wacker, George Huntoon and other drivers of the early 1950s.

Race reports from Buenos Aires to Le Mans to the Mexican Road Race to the SAC Base races to Fitch’s introduction to European racing take the reader along briskly and then we come to 1955 and John’s place as the only American on the vaunted Mercedes-Benz team. His greatest drive as the winner of the Mille Miglia GT class is detailed. He drove a thousand miles in half a day.

The story of how Fitch developed the Corvette from a boulevardier into a sports car is described here, with true credit to his contributions. As Evans says, “What Fitch had done has often been overlooked by automotive historians who, more often than not, accord much of the credit to Zora Arkus-Duntov.”

The achievements of this remarkable man continue with the creation of Lime Rock Park and the safety aspects that protected both drivers and spectators. It was a dedication to racing safety that is described later in the book as well.

One of the best examples set by Fitch, as Evans describes, is how to deal with aging. He did not deal with it. He ignored it. That’s how he found himself at the age of 86 out at the Bonneville Salt Flats going for a speed record in the 300SL owned by Detroit car enthusiast Bob Sirna.

John’s 90th birthday was spent in California at a party held by Art Evans for his friend. World Champion Phil Hill was there, along with Shelby Team driver Bob Bondurant. It was incredible how he could keep going. It seemed that he would last forever.

This book is his story. It is practically a motion picture of sports car racing in the 1950s, both American and European. A super effort—it’s historically important and you will enjoy reading it.

This review appears courtesy of the SAH in whose Journal 275 it was first printed in substantially similar form.

Note: reviewer Goodwin was a business partner of Fitch’s for 18 years on the energy-absorbing safety barriers for racing. Carl’s late wife Nancy was a good friend of John’s wife Elizabeth, and when they went to Lime Rock they stayed at the Fitch home. Goodwin is also an author and the recipient of four Carl Benz Awards.

Ian Walker Racing: The Man and His Cars »
« Maxwell Motor and the Making of the Chrysler Corporation