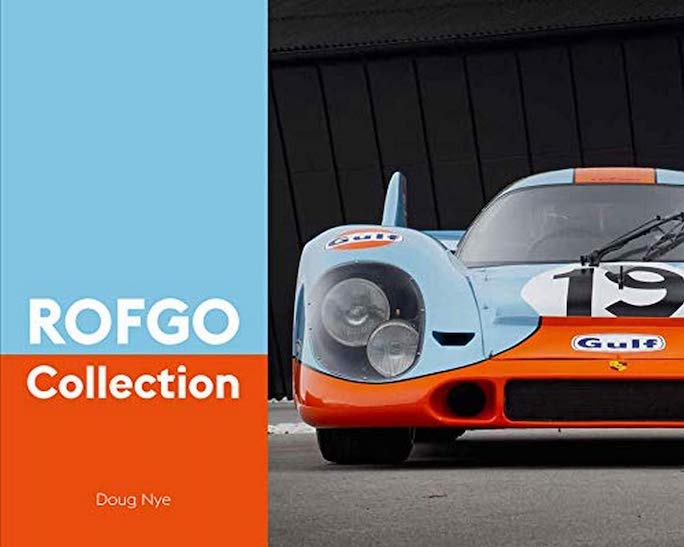 If you don’t already follow not just historic but proper current pro-level racing, this quote tells you two things: these cars are not museum queens, and those names are the big leagues.

Also, these cars are not just toys to the man behind the collection although his story starts with toys. Who hasn’t played with a favorite toy car and with youthful exuberance announced “One day I will have the real thing!!” A German fellow named Roald Goethe (his name makes up the RO and the GO in ROFGO, the F coming from his middle name Fridtjof) did just that. Born in 1960 he had to wait a few decades to make it happen, but then, amazingly, he did it with a big-time iconic car, a Ford GT40 that had contested Le Mans and Spa in its day (chassis 1084, originally 1004). More amazingly, over the ensuing two years he added another 20-odd racing cars, and by now he’s north of 40. They have a common denominator: all were once sponsored by Gulf Oil. You can hardly argue with author Doug Nye’s remark that Goethe “now occupies a respected position as owner of perhaps the world’s finest focused-theme, private competition-car collection” (it was voted 2019 Heritage Collection of the Year).

Goethe says he was originally attracted to the Wyer/Gulf cars because of the blue and orange color scheme. (By the way, the book refers to it as marigold, not orange.) Good thing this superfan didn’t dye his hair that way because Gulf Oil cars also come in green and papaya and other hues.

You can’t really “visit” the collection, which resides in England, so other than seeing a ROFGO car turning a wheel in anger pretty much anywhere in the world, this book is your chance for an inside look. While the book doesn’t say so, its release in 2020 surely had something to do with the Stuttgart Retro Classics show that same year because it featured 25 ROFGO cars (and a motorcycle and a truck), plus the man himself was in attendance and happy to talk about his cars, with great verve and deep knowledge not just of their model and race history but also how they drive, feel, smell. And he is able to expound on the latter because he gets behind the wheel himself. (Possibly by now his name will put you in mind of a huge accident at Le Mans in 2015—that was Goethe going into a wall after getting clipped by the race leader/winner. The 66g hit put a dent into his spine but not his enthusiasm which Nye rates “limitless.”

The Howmet TX, one of only two made. What does the “TX” mean? Turbine EXperimental; it is “the only gas turbine-powered competition car ever to have won a significant road race.” It also set six World Speed Records in 1970.

The 35 cars on these pages will put you in mind of another thing that seems limitless . . . money, not just to buy the cars but to actively campaign many of them. It’s not polite to talk about such things, and Nye doesn’t, saying only that Goethe is/was in the oil and gas business. Well, his career path is hardly typical so if you aspire to such a lofty level of collecting, come up with your own grand idea. On the one hand, Goethe is quick to say that the cars have become way too valuable/expensive and that he got into them at a good time but on the other hand it is known that he and the fellow the book refers to as the collection’s co-creator, UK classic car specialist Adrian Hamilton [son of 1953 Le Mans winner Duncan H.], are putting together another one of 50 silver cars.

So now you know what ROFGO stands for. How about RALT, as in this Ralt-Alfa Romeo RT3? That would be Australian brothers Ron and Austin Lewis Tauranac. Writes Nye: “Among all great racing car designers, Ron Tauranac’s name is perhaps the least known—and yet is one of the most admired by his peers.”

So, to say it once more, this book will be for most folk the most expeditious way to see the cars. Moreover, you have eminent historian Doug Nye as tour guide. Considering his career path, there can be no question that the decades spent in the motorsports world give him personal knowledge of the cars and more importantly the people of whom some are quoted extensively. Unlike other books that present car collections this one goes beyond a specific ROFGO car by discussing the model in the broader sense i.e. sister cars or other “marks”/versions which in turn extends the range across a very great patch of the motorsports landscape.

A 917K. Majestic. Rare. But look at that transporter too! This 1971 ex-Porsche truck is the very one that hauled this very 917 to/from the races. It was bought in sad shape but “for a King’s ransom” in the US.

The cars are divided into four eras spanning 50+ years (and multiple racing classes) and within that are presented individually in chronological order (by which is not necessarily meant year built; the “Results and Specifications” section at the back of the book makes this clearer). The book is approachable by anyone at any level but motorsports geeks will be absolutely delighted with both the depth of detail but also appreciate the editorial discipline to keep it all in check. In fact, so many dots are connected that at times it is easy to forget that the book’s main focus is “only” on Gulf Oil-sponsored cars (and that, to state what should be obvious but surely isn’t, includes a lot more than just John Wyer). A very good Index is par for the course in a Doug Nye book, and with Porter Press as publisher there is a deep bench of design and production experience. The landscape format is used to full advantage, particularly by the specially commissioned shots. That they are all taken outdoors rather than the studio fits the image of the cars as actively driven but is more a function of their cramped storage facility. A multitude of close-ups of details and a good selection of archival images round out the picture.

Not sure what this is? Better get the book.

Goethe’s inspiration was playing with toy cars; his own two sons got to play with the real cars and it’s either that sort of conditioning or genes that has put them on the path of professional motorsports. Keep an eye on the several feeder series and start paying attention to Benjamin and Oliver G.!