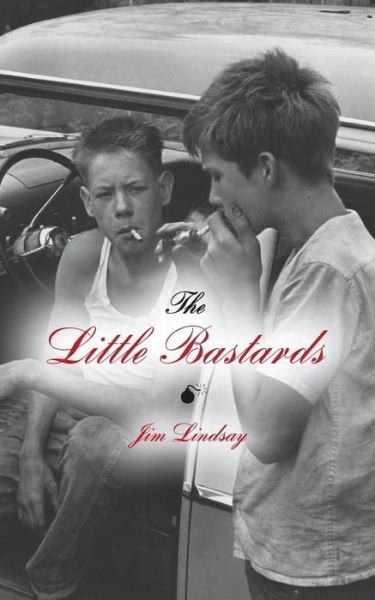 If you have hot rodding in your blood and/or started smoking butts in your early teens, the cover of the book will grab you. The photo was taken by William Gedney in Leatherwood, Kentucky, back in 1964, a decade after The Little Bastards begins. And although the book is set in the small town of Williamette, Oregon, Gedney’s image of the bad boys lighting up—notice they are using the car’s dash lighter—works just fine.

I like The Little Bastards. Is it great literature ala Joseph Conrad’s Lord Jim? Does it compare favorably with the coming-of-age novel J.D. Salinger’s Catcher in the Rye? As far as Conrad goes, the answer is no. But the world of literature is blessed with, really, only a handful of geniuses, and readers are not always looking for something complex, deep troubling, and obscure. And because high school teachers of English are fond of teaching it, Salinger’s book has acquired over time the aura of a sacrosanct classic, but it is much overrated. If I were forced to pick either Catcher or Bastards to reread, I would go with the latter. And as much as I am fond of Henry Gregor Felsen’s novel Hot Rod, which is similar in style, theme and intention, again Lindsay comes out ahead. Bastards is the story of Sonny, his friends, their escapades, their interactions with each other, their families, their school, the police and the small Oregon town they call home. The story begins when Sonny is fourteen, he and his friends riding bicycles, and ends when Sonny, he and his friends driving hopped-up, hunkered-down cars, becomes a senior in high school. 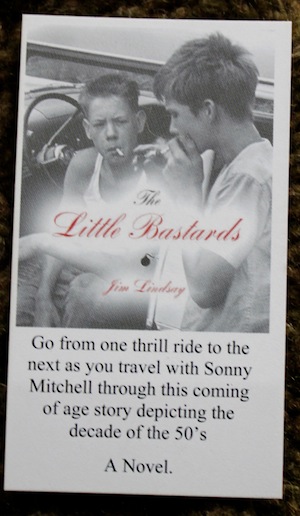 Before going further, let’s dispense with the book’s few problems. Overall the grammar holds up—and who today concerns themselves with the correct usage of “further” and “farther” (p. 193)? If there are typographical errors, I did not catch them. A few anachronisms surface, however: When thinking of the relationship between fathers and sons, I doubt if Sonny would have used the term “micromanage,” and, because of the time the novel is set in, Sonny could not have made a reference to The Beach Boys. And there are times when the dialog just doesn’t quite ring true for an Oregon teenager wearing Levi’s, leather boots, a brown bomber jacket, and a white Penny’s tee-shirt: “It was common to for rich folk to ride around in private cars, especially big shots from the railroad hierocracy” [emphasis added]. Would Sonny, even internally, come up with “The whole conglomeration that was running amuck in our brain matter was about to explode”? But these all slide by mostly unobtrusively. The flow is interrupted only slightly, and the story is strong enough to ride over these speed bumps and keep on going.

The Little Bastards is episodic but Lindsay manages well the progression and as the last few chapters unfold, a story line emerges that brings the book to a satisfying close. The episodes work—from the clubhouses and mischief of fourteen-year-old boys, the Halloween spent in a mortuary, the trip from Oregon to Mexico, the various drag races, to Sonny falling hard for a girl he knows he must look after. Whatever devilment the little bastards devise, it is never cruel or wantonly destructive, never coldblooded or ugly. And here lies the charm of the book: There is a sweetness woven through it. Sonny’s folks are good people. The understanding Sonny builds with his father, a rather taciturn but agreeable man, is believable, perhaps enviable. His mother seems kind and caring. Townsfolk, even the Barney Fife deputy and his uncle Sheriff Cleveland who would really like to get his hands on the car-crazy boys—and Lindsay offers a smart twist when he finally does so—are decent people. Mechanics help the boys hop up their cars, the various bosses Sonny encounters are accommodating, friendly, and the banker on the corner is encouraging and sober. Could Lindsay have developed his characters more? Probably, but because of the nature of the novel, it doesn’t matter that much. And Williamette is not quite a town that Rod Serling would have imagined, and that is to the good. Lindsay’s small town has much of the warmth of Rockwellian America and little if any of the meanness and underlying corruption that other writers may have exploited; Lindsay’s depiction is neither saccharine nor too good to be true.

Nostalgia plays heavily in the world of hot rodding—just pick up a copy of Hot Rod Deluxe Magazine. The Little Bastards is not an exception. Remember nailing metal cleats to your soles and heels? Recall that a TV set had to “warm up”? Who today smokes Cavalier cigarettes? Did you ever return empty pop bottles for three cents apiece? Imagine, too, the excitement when Ike Eisenhower’s dream of the Interstate Highway system manifested itself in large swaths of new construction, and imagine too how exciting it would be to drag race over the completed but unopened sections of this highway. But Lindsey doesn’t overdo the nostalgia and this is to his credit. Oh, and by the way, Sonny’s ride is a 1940 Ford coupe with a 1957 Oldsmobile V-8 and a J-2 high performance package under the hood. 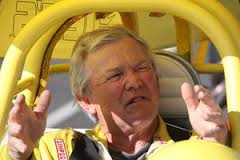 With that, it would be a good time to note that Lindsay, born in Corvallis, Oregon in 1947, basically lived the life of The Little Bastards, and that his experience with fast cars is real. Like Sonny, he is a hot rodder and drag racer, but he does Sonny one better, “piloting a land speed racecar.” You just have to admire a guy like that—and, yes, he writes novels too: Look for a sequel in the not too distant future. 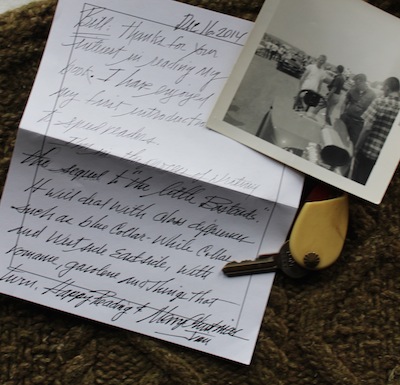 PS: The photo above of the fellow in the car is Jim Lindsay. The other one shows me in 1963 at a York, Pennsylvania drag race, a letter from Lindsay to myself, and the keys to my father’s 1940 Chevrolet—he had bought it new and kept it until 1960. Seems appropriate.

Posted Under: Automobiles, Fiction, US | Author: Bill Wolf | No comments yet