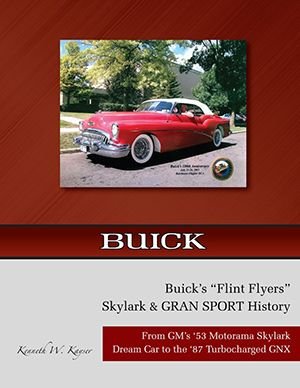 The importance of establishing a car’s provenance has been frequently acknowledged. While this book easily does that for one specially ordered and built 1966 Buick Gran Sport, it also tells a much bigger story, that of a company and a marque. That said, Buick’s “Flint Flyers” is no rehash of existing Buick histories for its focus is the engineering and technical aspects of the marque over its 100+ years of existence.

The author, Ken Kayser, was educated in engineering at the General Motors Institute of Technology, then attained a masters in business from State University of New York at Buffalo. He applied those paired skills over a 40-year career at various General Motors engine plants. Those experiences enabled him to write this book from a perspective of the behind-the-scene inner workings that is not usually found in books. Too it enabled him to source documents and images not usually shared with readers or even available to literature collectors. Over a thousand of those documents and images that include engineering drawings, patents, dealer service information, charts, and more are used throughout the book with each captioned as might be expected of a career engineer—as in very specifically and carefully.

Kayser opted to self-publish in order to retain total control of his book’s content. His choice of a print on demand rather than offset printer did result in some of the images and documents appearing a bit murky but the caliber and incredible detail of the editorial content more than makes up for that. Kayser’s writing style is direct and to the point with scarcely a word wasted although there are a few misspells, a wrong choice of homonym now and then, and an occasional incorrect fact. 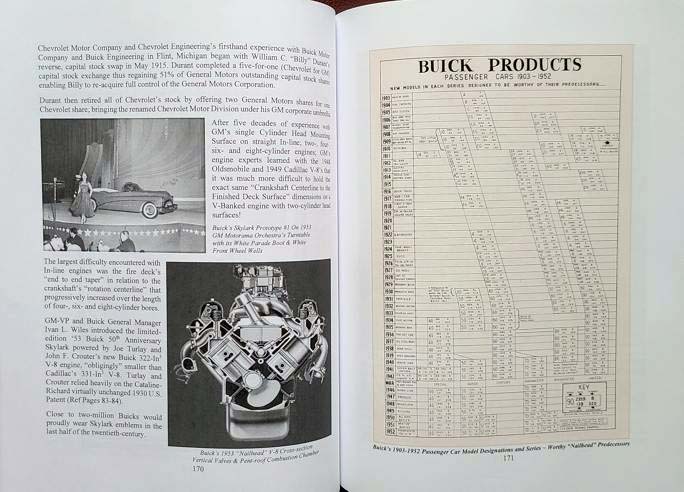 The chart on the right hand page is a summation of all Buick car models 1903–1952 and on the left is a “nailhead” V-8, so called due to the small size of its valves as required by their placement. Above it is the ’53 Skylark prototype on display at that year’s Motorama. Note that the car on the cover is a production 1953 Skylark. This particular car’s data plate on the firewall identifies it as body number four.

With the sixth chapter, Kayser’s chronological narrative arrives at telling of “Buick’s 1965–66 Gran Sport Genesis”. Included in this chapter are actual pages from the “1966 Assembly Instruction Manual”. This volume, rarely seen outside of those with a “need to know” is essentially a Standard Practices book created for the assembly plant personnel. In this case this manual was distributed to the four assembly plants building the 1966 Buick Special, Special Deluxe, Skylark, and Sportwagon models; Flint, Baltimore, Kansas City, and Fremont.

The narrative now tightens its focus to “Buick’s 1966 Flint Flyer Engineering” again in great detail as the following image indicates. The importance of the information in this chapter will become apparent toward establishing the significance of the one specific car whose provenance will be established in the next chapter. 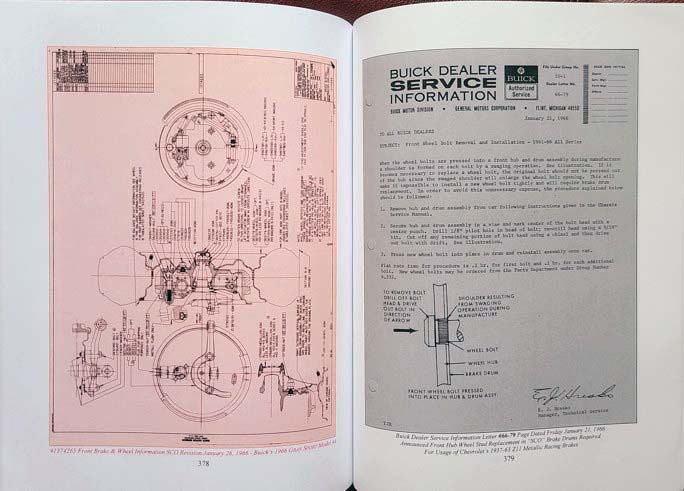 Examples of the detail discussed in the chapter on engineering of the ’66 are, on left, front wheel and brake specifics. On the right is some of the information provided to dealers, this particular document is about front wheel bolt removal and installation.

The eighth chapter explains why and how this one specific 1966 Buick Gran Sport, serial number 44617H223531, came to be special-ordered and who ordered and subsequently owned it, followed by his widow until 2000 when the author acquired it and embarked up its resurrection and restoration. 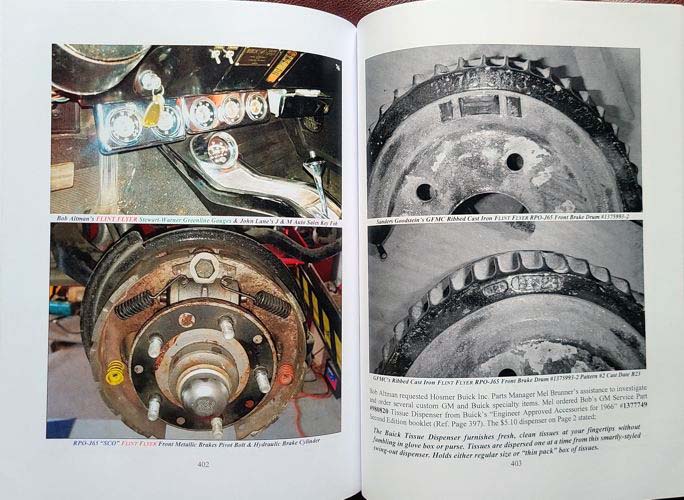 Brake and gauge detail on 44617H223531. Yes, these high performance metallic brake linings and specially-cast ribbed or finned drums were available as a special order option although very few were aware. Photo captions specify the part and order numbers.

Frosting on the cake, Ken Kayser respects his reader to such a degree that he created a very thorough and comprehensive Index for this is a book—if the topic and technical detail is of interest or use to you—you won’t just look at once and then put on the shelf. Rather, it is more apt to become a well-used reference for it is that good.