One of a Kind Research Aircraft 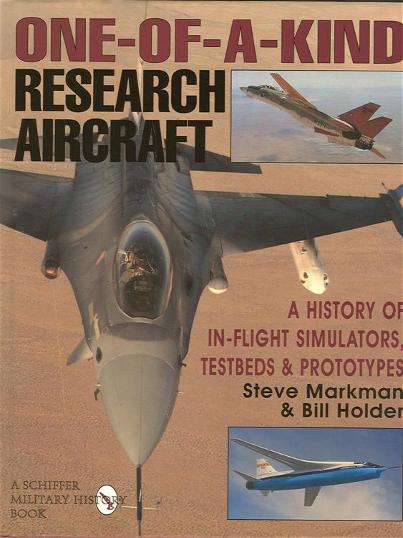 This book was the first to introduce to the general public some of those aircraft that were hardly known outside the professional community of aircraft developers and testers. Headline-grabbing experimental planes—the X planes—such as the X-1 in which Chuck Yeager broke the sound barrier in 1947 or the X-15 of 1959 whose exploration of high-speed, high altitude manned flight yielded data that would find ultimate application in the Space Shuttle entered the common vernacular but the workhorses that test everything from the durability of paint to new science that is 10 or 20 years in the future remained unrecognized.

A word of clarification first: this book describes certain aircraft (all but two are fixed wing) and their missions but not the story behind the technologies being tested or, for that matter, the how-to of adapting an existing airframe to a new purpose. In simpler terms, it describes the test tube but not the methodology by which someone thought up the experiment. Also outside the scope of the book are unmanned aircraft. And, it is intended as a first stab at the subject and is knowingly incomplete inasmuch as the authors had to be selective.

Of the introductions to the book’s three sections—in-flight simulators, testbeds, prototypes—the first one is the longest, and rightly so because it is the least obvious to explain to the non-specialist reader: that an existing airframe can be reconfigured (by electronic and physical means) to behave like another, thereby taking the pilot out of the ground simulator into the air and removing the psychological crutch of thinking that the worst that could happen in a crash is that a controller might spill his coffee. Especially in the first two sections you’ll look at some of the planes and think someone spiked your drink: two noses, extra wings, protrusions sprouting from unlikely places.

The order in which aircraft are shown in each section is neither explained nor self-evident—follow the Table of Contents (there is no Index). Each entry has one or more photos and is preceded by a data block stating the item/procedure tested, the “host” aircraft, timeframe of test, and responsible agency and contractor (includes one Russian and one German project). This is then followed by a detailed explanation of the technology and mission procedures/parameters ranging from one to several pages. Photo captions are short but specific and list the source.

Author Markman is credited with the idea for the book. He was the U.S. Air Force program manager for all in-flight simulator aircraft and while he himself dabbled in all manner of exotic apparatus he realized that [a] there was no literature about it and that [b] he was not the man who felt the calling to fix that—until he ran into (rather sat next to, on a random airplane flight) someone he recognized from years and decades past as an aviation writer, Bill Holder (who also has several auto and racing titles to his name). Many people in the industry contributed input and material to the book. The Foreword is by a 35-year veteran of flight control technology and giant in his field, Morris Ostgaard (1921–2003), who was  the originator of fly-by-wire, active control,  and digital flight control system technologies. Markham has since written three more books, one of them with Holder (Straight Up, A History of Vertical Flight; same publisher).

As we remarked elsewhere, Schiffer books often warrant a look under the dust cover.

Vignale; Ferrari and all the others »
« Batman Black and White