The History and Design of the Studebaker Golden Hawk 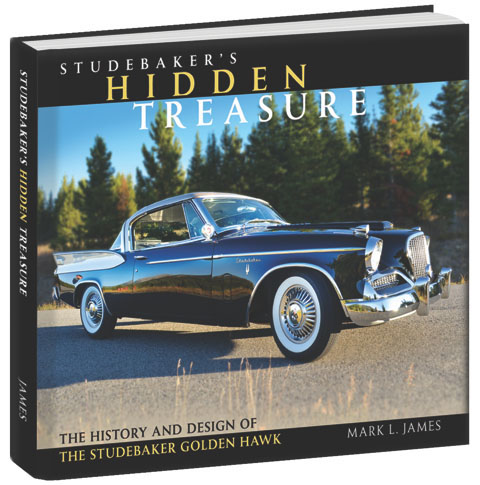 This beautifully designed, printed, and bound book resulted from author Mark James’ curiosity and desire to learn in order to fulfill and check off an item on his personal bucket list, the detailed and authentically correct restoration of one of his own cars. The resulting book is a car restorer’s dream if you are one of the fortunate few to have a low-production (with, of course, an even lower survival rate) Studebaker Hawk of any year, 1956–58. This slim volume features truly lovely photography of a car carefully restored to as-new condition.

As James points out in one chapter, there are more 1957 Golden Hawk 400s existing today than were ever originally produced off the assembly line. How can this be?

Seasoned auto journalist Phil Skinner, who follows the collector car market as an auction reporter for Old Cars Weekly, just happened to have published on this topic in OCW (cover date 23 March 2017) as this commentary was being keyed. In his article titled “The Numbers Racket” Skinner warns that a buyer must truly be aware and do his/her research—or consult with those who are expert—before purchasing.

Why do we need to be reminded by either this book’s author or by Skinner? Quite simply because too many of us, over and over again, don’t take the time to delve deeply enough into a marque’s history, much less that of a specific car we’re thinking of purchasing. As James writes pointedly and clearly, “There are 1957 Golden Hawks in which restorers have installed interiors mimicking the original 400’s . . . The only way to document authenticity is to compare 1957 Golden Hawk serial numbers with those of the 400s actually produced.”

James’ words echo those of Skinner who notes that “Several suppliers have come up with reproduction data plates. Most run a tight ship . . . however, some are altering the information . . . making it nearly impossible to tell if . . . switches have been made (without) the original sales paperwork.” A sentence or two later, Skinner writes this: “We have started to see a trend where a (car’s) details that are not included in the serial number are being changed” to make the vehicle into a more valuable or desirable model than it was originally.

Happily for this book, Mark James was a savvy buyer and, as a result of his research, a knowledgeable restorer (as well as an attorney). And it would take a couple of weighty references books, such as Kelly Flory’s American Cars 1946–1959, Every Model Year by Year and the Standard Catalog of American Cars 1946–1973 from Old Cars Publications to even begin to provide the details on the Studebaker Golden Hawk that are contained in this one book.

This review first appeared in substantially similar form in Avanti Magazine, the color quarterly publication of the Avanti Owners Association International to which the writer is a contributing editor.

The History and Design of the Studebaker Golden Hawk

Military, Naval and Civil Airships Since 1783 »
« The Gilmore Car Museum, Miles From the Ordinary