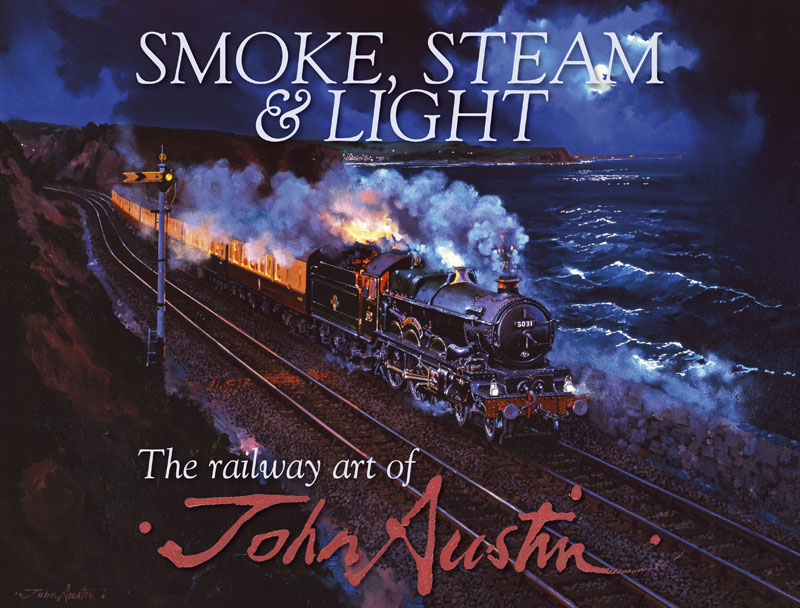 All locomotives are imposing in terms of sight and sound and smell—even modern diesels and electrics—but what could be more formidable than a hissing steam loco slipping its wheels to gain traction inch by inch or thundering past on full bore trailing stinging cinders and charcoal. If you’re old enough to have seen these behemoths in action the realism in Austin’s work will send shivers up your spine. He himself was born at just the right time (1949) to catch the closing chapter of the commercial use of railway steam locomotives.

It had been about 150 years earlier when Richard Trevithick’s full-scale working steam loco became the first to pull a train. But it is the trains and milieu of his own time that Austin presents in this book, the first to showcase his work in book form. Why “Britain’s most celebrated living railway artist” should have waited so long to agree to a book is not explained. It can’t be because he won the 2010 Guild of Railway Artist’s “Picture of the Year” award—he has done that in 16 out of the 17 years since the award was launched in 1993! The first railroad painting he sold, in the late 1980s, went for £80; today expect to part with £2500–6500+ for the sort of canvasses that are shown here. Consider this £40/$65 book then a cheap front-row seat to not only see 100 examples of his work but also have the artist talk about his work. Of course, the originals are about 10 times bigger than they are in book form and, with this subject, size does matter! There is a fantastic amount of mechanical detail that simply cannot be fully appreciated in a book that is only 11.5” wide (except for the endpapers no image goes across the spread; not that that would make a difference).

What does make an impact, even at this small size, is the dense atmosphere he packs into his paintings. Weather, landscape, light, and movement are as much a specialty of his as the mechanical bits. Austin relates quite a bit of his biography in the Introduction. British readers will instantly, and wistfully, relate to the cultural touchstones and also the geography so emblematic of postwar life in the UK. Inspired by railroad travel posters he began to paint seriouslywhen he was only eight years old but it wasn’t until midlife that he turned to art professionally. Importantly, he had spent by then some 15 years on a job that has a direct bearing on his paintings: lighting design. Whether it’s a summer scene in which each piece of rail gleams differently or a night scene in which sparks illuminate snow, light is rendered in Austin’s paintings with uncommon nuance. It is also noteworthy that he volunteered at the Severn Valley Railway locomotive shed to better learn about the technical features of the machinery he paints.

For all but the casual peruser who just wants to leaf randomly through the book the organization of the material is somewhat of a stumbling block. The paintings are mostly grouped by either railway line or branch, some by type of locomotive, and still others by location (cf. landmark or otherwise noteworthy buildings or bridges). Within those “groups” the paintings are not shown in chronological order. This arrangement is of little help to the serious railroader who would want to have some sort of help in finding specific pieces of equipment whereas the serious artist would want to follow the evolving refinement in Austin’s work. Each painting is dated (also the size and current whereabouts are given) but the Table of Contents, which lists each painting by title, does not state dates. This makes it impossible to see the work in chronological order unless you pencil in your own dates. The short Index is confined to people, structures, and locations.

In a handful of cases the “process” of painting is shown in stages, but not described, from charcoal sketches or early-stage blocking to final. The text presents mostly railroad history but says rather not enough about the scenes in the paintings or the specifics of their creation or commission. Not that this is terribly critical—but it would be interesting, especially since the artist is speaking directly. Therein lies, of course, often enough the problem: the person closest to the work is the least able to get into the head of the person who looks at all this in wide-eyed wonder.

Paper and reproduction are top-notch. Signed copies are available directly from the author and come with a hand-drawn autographed card. Austin does about 10 paintings a year and takes commissions!

Posted Under: Art, Artists and Design, Trains | Author: Sabu Advani | No comments yet