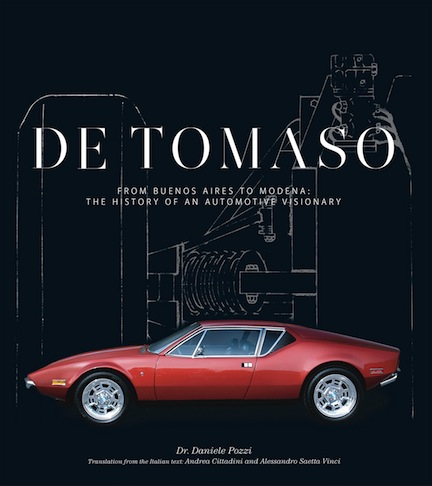 “Is this shallow image [the famous 1985 “Squeaky Clean” poster] a fair portrait of de Tomaso’s reality and what remains of his personal history today? Many of his detractors deemed de Tomaso’s endeavors, as a racer, an individual and a businessman, to be a bubble bound to explode because of his inconsistency. This position does not consider many details of Alejandro de Tomaso [sic] career.”

These ominous words are from the Conclusion, and they probably should be at the front of the book because they set a different tone than the ones which with it does start: “There was a unique vision for this book because the cars of de Tomaso had to be seen in a new and wider perspective. This is why a historian who specializes in the economic and social impact of companies and a photographer interested in sheer beauty rather than clinical technique have been chosen to produce it.”

In what way Pozzi’s perspective is “new and wider” is not self-evident but considering that it’s been 25 years since someone has taken a substantive stab at the bigger picture (Wallace A. Wiss, DeTomaso, the Man and the Machines, 1991, ISBN 978-0962968204) a new look is certainly warranted—not least since nowadays one de Tomaso car, the Pantera, is moving higher and higher on the auction ladder, reaching triple the levels it lingered at for decades and with more upside to come. The reasons for this change in fortune have nothing to do with the merits of the car—and in that regard it mirrors the larger story of a small carmaker run by a temperamental individual whose life and business choices were more reactive than proactive, meaning subject to forces not of his making.

What this nicely designed and well-illustrated book does bring to the table is a nuance- and context-rich account of a period in which everything was less regulated, be it racing or starting a company. It also introduces into the record details about the autoracing record of de Tomaso’s second wife, Isabelle Haskell, an American. (You may not have a de Tomaso in the garage but whatever car you drive, it probably has a distant connection to her: Triplex Safety Glass, founded by her father.) 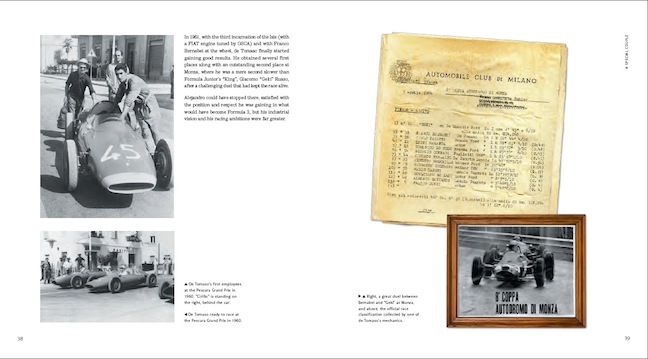 Returning to the quotes above, it may have been Pozzi’s intent to change minds but it is fair to say that neither the pro nor the con faction will find enough grist here to carry the day one way or the other. The book is said to have been “born from the collaboration with the de Tomaso family, who for the first time have opened the private archives of the founder of the auto maker, making available to the public at large the private photograph photographs, the historical images of all the models and the technical drawings.” There certainly is a great deal of period material and it, along with Giò Martorana’s new photos, are given a large, 11 x 12″ canvas on which to shine. It should be noted that the physical attributes—text, design, lack of Index etc.—of this English version of the book are predetermined by the Italian original (De Tomaso,  Un argentino nella valle dei motori. ISBN 978-88-6648-283-3) which also, even with the translation added, accounts for an uncommonly low price for a book of such high production values. 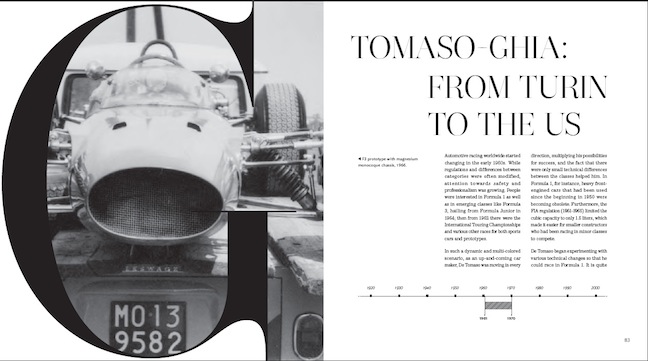 Pozzi’s take is on the whole sympathetic and, given his professional credentials, more business than car-focused. For an academic lecturing on anything from Entrepreneurship to Global Capitalism and who also runs a Management Consulting firm, Alejandro de Tomaso y Caballos is a natural case study. Both his and his wife’s backgrounds are traced individually until their paths meet at the Maserati factory (but where did Haskell who had no access to her family fortune find the money for a new Maserati racer? Even a multi-page interview with her doesn’t shed light on it), their separate and joint motoring activities are established, and we follow Alejandro on his professional activities from driver and mechanic to maker of race and road cars. On the one hand, the story advances in broad but cohesive steps. On the other hand, at every step the reader is left thinking there must be, well, more. The book is plenty big, although half of it is photos, so maybe there was just no way to make it more thorough. 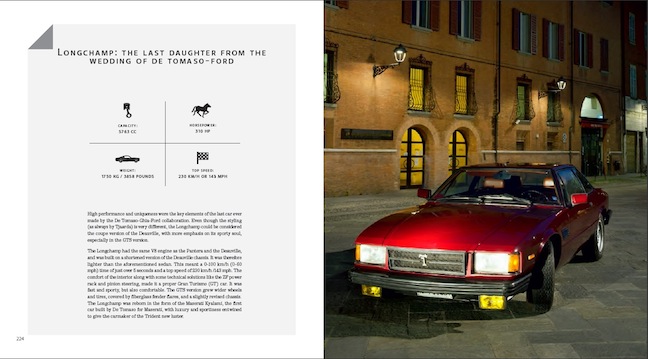 On that score it should be noted that there is minimal technical history and the few de Tomaso models are covered in a way that leaves plenty more room for other writes to plumb deeper depths. As a general overview Pozzi’s book absolutely holds its own. Also, and while this is more a function of the period itself than the result of any particular choice on the part of the researcher, Pozzi develops very nicely the enormous interconnectedness among people, cars, companies, trends. All the names you know from motorsports and industry and design make an appearance here so even if this book leaves some questions about de Tomaso open, it adds detail to many other stories in many other books. 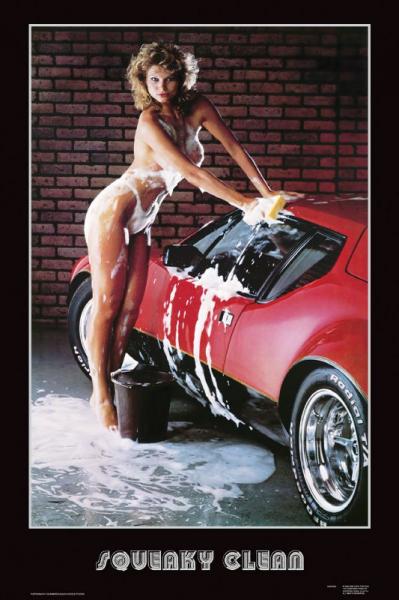 In every regard, de Tomaso (d. 2003) had a full and complicated life, his road cars were more practical and no less sexy than others costing many times more but were marginalized anyway, he was a wheeler-dealer in the best and the worst sense—yes, we did need this book, and we need a few more.