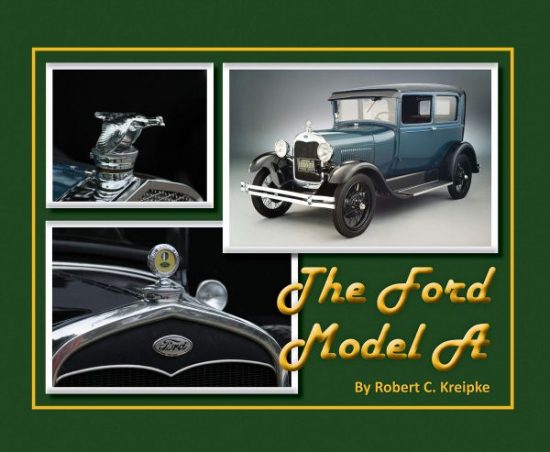 It won’t take you long to actually read this book although you will linger long on practically every page absorbing the details of this period-photo rich, text-light tome—especially if you’re a fan of the Ford Model A. Written and assembled by Ford Motor Company’s historian emeritus Robert Kreipke, it contains some images not commonly seen before now.

Ford produced the Model A for only four years 1928–31, as compared to making T’s for just two years shy of 20 and in quantities around 16.5 million. Yet despite two of the A’s four years of production being after the stock market crash and thus during the ensuing Depression, its production and sales achieved nearly five million units (cars and trucks). Had the A’s longevity matched that of the T, think what numbers it might have achieved. But, of course, that’s pure speculation because Henry and Edsel, intent on keeping Ford competitive, had worked feverishly readying its replacement, the V-8, which debuted in 1932.

The pages really do have a blue tint!

During the Model A’s time of manufacture Ford Motor Company produced its twenty millionth vehicle and so noted by touring it to dealerships all over the country along with appropriate publicity and celebrations. As the years passed that Twenty Millionth Ford was thought lost until one day author Robert Kreipke was approached by a man saying, “Ford’s 20millionth car is in my mother’s barn.” It was no false claim as Kreipke was able to validate. The 1931 Model A Fordor Sedan is now fully restored and proudly displayed.

Another famous Model A, said by some to be the first A produced, a Tudor Sedan, was delivered to inventor Thomas Edison, a gift from Henry Ford. Trouble was, Edison longed for and wanted an open car. So Henry had the Tudor shipped back to the factory and rebodied as a Phaeton. That car was never “misplaced” and today resides in the Gilmore complex in Hickory Corners, Michigan. The Gilmore was the subject of an earlier reviewed book titled simply Gilmore Car Museum, “Miles from the Ordinary” by David O. Lyon, first published in 2010 and into its third printing by 2014.

This book, seemingly embracing the phrase “a picture is worth a thousand words”, provides proof that it is possible to relate a multi-year vehicle history in considerable detail mainly with images, providing they are carefully—albeit briefly—captioned, which, of course, these are. Insert of a few succinct charts and tables summarizing production statistics and body styles offered in each year helps to complete the history. And with a credited book-production staff that includes a proofreader and content consultant, the book is essentially error free.

We know that today both A’s and T’s are ever-popular with hobbyists and each is well supported by clubs and their member-enthusiasts. This book acknowledges that devoting several of its concluding pages and noting that the hobby is to thank for on-going parts availability and all the technical expertise that is “out there” to help hobbyists keep their cars on the road.

Publisher MT Publishing, as this commentator has come to expect, exhibits the attention it pays to layout and printing with this hardcover book. Its presentation is car-photo friendly landscape format and is indexed as well.

Gentlemen, Start Your Engines! »
« Ladies of Lascaris: Christina Ratcliffe and the Forgotten Heroes of Malta’s War