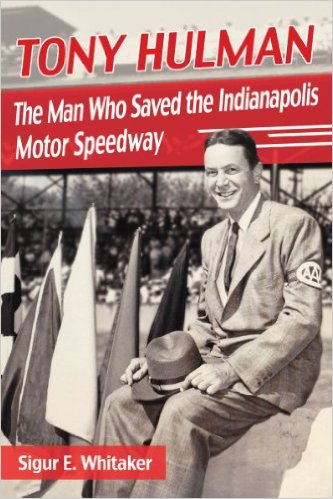 Pittsboro, Indiana: Anton (Tony) Hulman, after weeks of deliberation during the summer of 1945, completed his business decision concerning the Indianapolis Motor Speedway (IMS) and elected to purchase the track from Eddie Rickenbacker on November 15, 1945, for the sum of $750,000, equaling the amount paid by Rickenbacker for the track in 1927.

The track was the brainchild of four Indianapolis businessmen: Carl Fisher, James Allison (great uncle of author Whitaker and the subject of her 2011 book), Arthur Newby and Frank Wheeler, who were passionate about improving the American automobile. Built in 1909, this 2.5-mile paved oval was unique as most auto tracks were one mile or less in size and had dirt surfaces.

Shortly after Hulman purchased the track, which had sat idle throughout World War II with the exception of a few tire tests conducted for the government war effort, it was quickly decided to prepare the track and grounds for a revival of the Indy 500 scheduled for Memorial Day 1946.

At the close of the period for entries the Speedway had received fifty entries including Rudi Caracciola, famed Mercedes Grand Prix driver who was specifically invited by Hulman and Wilbur Shaw, President of IMS. Shaw was a former three-time winner of the Indianapolis 500 (1937, 1939, 1940) and both felt that the addition of racing celebrities would broaden general interest in racing.

The 1946 race was won by George Robson with an average speed of 114.82 mph. Robson had participated in the 1940 and 1941 races. A June 1946 article in The New York Times praised Hulman. However, not everyone was happy: Indiana state and local police officials estimated the attendance for the inaugural race under the ownership of Hulman was approximately 200,000 people, which resulted in several traffic jams on the surrounding roadways and entrances into the track. These traffic issues resulted in annual improvements to the Speedway.

This entire book is a page-turning read that elaborates the intense personal interest Tony Hulman had for people and improvements beneficial to business, auto racing, and communities. You don’t want to miss reading each rewarding historical chapter chronicling Tony’s life up until his untimely death in 1977.

This review appears courtesy of the SAH in whose Journal #270 it was first printed.

Posted Under: Biography/ Autobiography | Author: Other | No comments yet