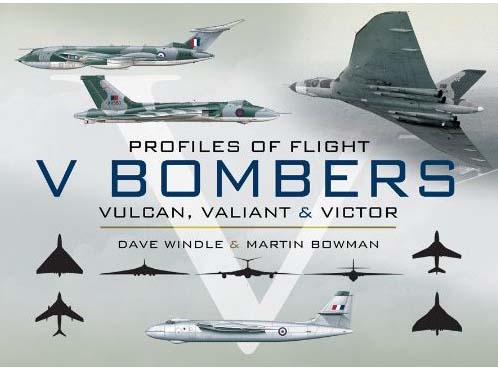 Unlike the multitude of often look-alike car models there are many fewer models of airplanes, few enough to be easily recognizable on sight. Among the bombers, the three featured in this book are especially distinctive and if you ever saw one, especially at the time of their first flights 1951/52, you’d remember their futuristic and entirely unprecedented shapes: the high swept-wing Valiant (by Vickers), the Vulcan with its enormous delta wing (by Avro), and the crescent-winged and pointy-nosed Victor (by Handley Page).

During the 1950s and 1960s these bombers made up the United Kingdom’s strategic nuclear strike force, known officially as the V-Force or Bomber Command Main Force. At its peak in 1964 it consisted of 159 of these three planes. All the types saw active service albeit conventionally armed; a Valiant was the only one to drop a nuclear device, as part of a test. At various times all of them were used as air tankers or reconnaissance planes.

Presumably the first of a new series, this slender book is somewhere between a spotter’s guide and an introductory model history. Its brevity precludes it from going into in-depth detail but its landscape format is an ideal foil for illustrator Dave Windle’s 18 pages of technical color drawings of each type in profile—including the prototype as well as different aircraft marks and variants—and in various configurations (such as external payloads or refueling hoses; gear or airbrakes up/down), and color schemes. Modelers especially will find these detailed illustrations useful.

Following a brief overview of the political and tactical conditions that prevailed at the dawn of the atomic age and the resultant new set of strategic needs, the bulk of the book presents the basic story of each plane’s purpose, development, and service history. The overall story is told chronologically, not by plane, so the reader who is trying to get a handle on any one type by itself will have to labor. This is not helped by the fact that there is neither a Table of Contents nor an Index. The photos call out each plane’s serial number. All of them are exterior shots, on the ground or in the air. You’ll have to hunt a bit to find a shot containing other points of reference in it so as to get a proper sense of these planes’ considerable size. Technical and performance specs are embedded into the narrative as applicable; the reader who is looking for a lot of data and all in one place should be mindful of this book’s scope and intentions. Considering how hard it is to cover a lot of ground in only a few pages the book does an admirable job of reigning in a complex subject without becoming so superficial as to be useless. It even finds room for quite a few lengthy quotes from flight personnel. The authors don’t list their sources for squadron information and service particulars so it is impossible for us to comment on their validity except to note that the No. 230 OCU’s disbandment date is given as 1980 (instead of 1981) which is probably wrong and certainly in conflict with other books.

Overall production numbers and serial number blocks are listed in one table, segregated by type. Separate, individual lists show the squadrons each type was assigned to along with the home bases and service dates. The aforementioned color section is preceded by one page showing the scaled outline and wingspan (plan view) of each type and stating its respective dimensions.