A Technical & Operational  History of the Liberty Engine: Tanks, Ships and Aircraft 1917–1960 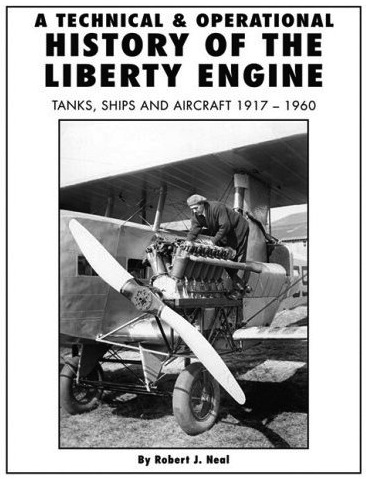 One of history’s most famous engines, and very possibly the one with the longest active military service life, the Liberty represents an ambitious and visionary solution to what could have become an intractable problem: in the early days of engine-building, be it automotive or aero, anyone who could wield a wrench or run a slide rule had a go—lots of creativity, and also lots of incompatibility. Engines, invariably, have war-related applications and early on planners in government and industry perceived the need for standardized designs, not just to curb manufacturing inefficiencies but also to facilitate field servicing. The theory behind the Liberty was to standardize aircraft engine design by offering one engine in several sizes (i.e. cylinders) to satisfy any foreseeable need. Scalable from four to twelve cylinders—plus an experimental 24-cylinder and one- and two-cylinder models for test purposes—and with many interchangeable parts the Liberty would find application on land, sea, and in the air and after its multi-decade military career soldiered on in civilian life until even today.

Since 1966, the author, a retired IBM engineer with interests in automotive, aeronautical, marine, and firearms history, has produced four major—and we mean major—historical reference books (and numerous articles). His two-volume 1990 opus on Packard’s non-automotive engines (Packards at Speed and Master Motor Builders) provided the genesis for this new book. Packard played a major role in the Liberty’s development and was its largest producer during World War One and then became involved with Russian (1923–1936) and British (1938–1943) production of the engine.

A self-professed lover of statistics, he likens the degree of completeness of this book—in terms of data pertaining to the engine’s history—to a 5000-piece puzzle in which all but five random pieces are missing. What little remains missing is not for want of trying to find the answers but due to some snippets of information simply not having been preserved back in the day. If you already know any of the marquee names in the field of engine history you’ll be pleased to know they all had some involvement with, and high praise for, this book.

From initial idea to development to production, the book covers its complete history and every major application. True to its intent, the Liberty was produced by a number of manufacturers and Neal has consulted all their archives as well as those of the WWI Air Production Board and US Air Service. The over 1000 b/w illustrations are comprised of photos, graphs, charts, reproductions or recreations of correspondence and memos, and technical drawings. The photos are extensively captioned, credited, and illustrate every conceivable aspect: people, factories, engine close-ups, vehicles, even postage stamps of Liberty-engined aircraft.

Being a historical rather than a technical treatment the book is easy to read, with the caveat that there are limits to the liveliness and pace of the prose in such an object-specific, in-depth analysis. What formulae and math there is pertain to performance parameters.

Eight Appendices cover over 120 pages. They list Liberty contracts (including British; the Russian ones are only summarized) by manufacturer, date and item particulars; production numbers; records of known tests; 1919 specs; a tree diagram chart of the engine’s uses; a 60-page section with lists and photos of all Liberty-powered aircraft; and a final section of photos of the various components in several different engines. An annotated Bibliography and a very deep Index leave nothing to be desired.

Applying the “price-to-value” yardstick, this 5-pound book is absurdly cheap in relation to the staggering amount of research it took to compile and the benefit it will provide to future scholars.