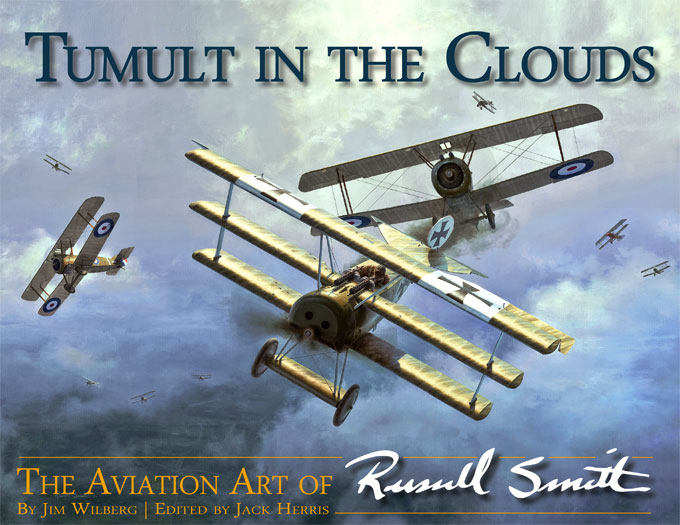 “As I process in my head the facts surrounding an event, I begin creating small, often indecipherable thumbnail sketches which help me to visualize the moment. As I create my sketches some of the things that I try to focus on are good patterns of darks and lights, interesting shapes and masses, and strong lines.”

A good look at the cover image (“Wolff’s Requiem”) shows that, indeed, there is a lot to process, both by the artist and the viewer. As an artist working in the tradition of the Classical Realists, Smith’s representational approach is rather more demanding than an interpretative one because light, action, motion, weather, landscape and the like are derived from actual combat reports and can’t be fudged. And while scant facts recorded on a crumpled piece of paper still leave plenty to the artist’s imagination, this too has to be informed or restrained by his firm grasp of precise facts such as aircraft construction and flight behavior.

To educate himself, Smith, who started his full-time painting career in 2001 and began to concentrate on WW I themes in 2003, goes to the trouble of seeking out replica aircraft, hitching an occasional ride to form an understanding of how an aircraft feels in a turn or a dive, how the turnbuckles groan and the canvas thumps, and he seeks out the advice of learned aviation historians, flyers, and restorers. Some of them are all three at once, and one of the dozen who contributed material to this book minces no words when he says, “The artist’s harshest critic is steeped in minutiae and any inaccuracies this critic can point out will cost the artist dearly.”

That the list of contributors is a veritable who’s who [1] of early aviation specialists only proves that Smith’s work is held in high esteem. Already the Introduction, by fellow artist Mike O’Neal who both influenced Smith and set him on the course of zeroing in on WW I aviation, is remarkable for its unselfish praise of Smith’s output and ethos, pointing out that it is the greatest measure of an artist’s relevance if those patrons of his work that have a direct connection to the work—nowadays mainly the survivors of the people in the paintings—feel that the subject has been done justice.

In landscape format, the book features 44 full-color examples of Smith’s award-winning work along with 20 b/w sketches or studies (plus 4 four color profiles by Alan Toelle). As author Wilberg comments in his Preface, “artwork adds ‘muscle and flesh’ to the historical skeleton that is fabricated by the words written by aviation historians.” Smith certainly subscribes to the notion of artist as documentarian and it is to that end that he himself devotes a number of pages at the beginning to describing his process, from experimenting with different—literally and figuratively—points of view to researching every detail, from aileron deflection stressing a wing to trailing smoke to aircraft markings.

And it is the 25 chapters (several written by the same author) written around the 44 paintings that provide in-depth detail. The first two, for instance, look at how a certain aircraft would actually behave, in flight and on the ground. The first one, about the Fokker Dr.I, makes a not at all obvious point: even if airworthy replicas exist, none of the original drawings survive and so several of the reproductions are “over-built” (modern engines and other gear). Ergo any impressions they yield, to their pilots or to Smith, would not be representative of the real thing and thus mislead the artist. The writer of that chapter (Fred Murrin) ought to know; he owns one of the only five rotary-powered repros known.

Such a level of magnification is applied to a number of subjects—men, machines, events, forensic photo analysis, the rigors of research in general—leading the reader to an appreciation of the formidable challenges someone like Smith faces.

In other words, the book is much more than its title would lead one to assume. (Speaking of which, there is another book with the same main title, a 2004 WW II-themed biography (ISBN 978-0451211989). While not a critical problem, we owe it to our readers to point out that the printing process is a fickle one; the color values of the cover image for instance are very different from the same image inside the book. There is no Index but all Smith paintings are listed by page and title on the Table of Contents and then again at the back (except for the cover image which seems to have been overlooked?) in alpha/date and then in date/title order.

Since this book came out in 2011 two additional titles have been added, each similar in scope but with more paintings: Knights in Canvas about the art of James Dietz and Aviators of the Great War featuring the art of Steve Anderson.

This book is also available directly from the artist as a special remarqued edition for $99.95, meaning it includes one small custom drawing of your choice on an 8.5 x 11″ vellum insert.