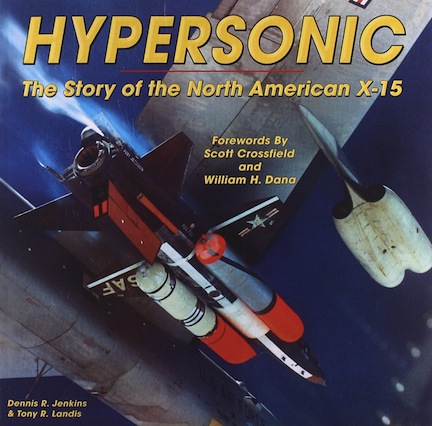 After World War II it became obvious that airplanes were going to go faster than ever before. Jet and rocket engine development during the war guaranteed that power was now available to push airplanes to speeds thousands of miles an hour faster than the best existing military planes of the day. The unknown was what sort of airframe shape and construction materials would be needed to not only break the speed of sound, but go more than six times faster than that. What happens to air when an airplane is forced through it at 4,500 mph? What happens to the plane? How do you fly it up to 67 miles high, where the air is too thin to allow rudders and ailerons to work? How do you keep the airplane from melting in the tremendous heat loads that friction generates at Mach 6, or upon reentry from airless space? Could a pilot survive the g-forces of acceleration and deceleration?

The military and NASA (known as NACA back then) decided the most direct way to answer these technical and medical questions was to build a rocket with wings, put sensors all over its surface, then fly it with a pilot to see what happened. Between 1954, when the X-15 project was begun, to the final flight in 1968, the basic questions of hypersonic flight were answered. The success of the X-15 makes for a great story of the triumph of science over the unknown. Designed with slide rules and logical conclusions based off the semi-accurate wind tunnel test data available at the time, the X-15 jumped well past where airplanes were then, and even past where they are today. Only the Space Shuttle has flown faster through the atmosphere than the Mach 6.7 (4,520 mph) the X-15 reached in 1967, nearly 50 years ago.

Where do I start? This book is so comprehensive that it almost becomes intimidating to think about reading. Over 150,000 well-written words and almost 600 professional photos and illustrations tell it all. If it has anything to do with the history of the X-15, it’s probably touched on and pictured in the book somewhere. If someone wanted to build an X-15 from scratch, this book is where you would start! Construction materials are listed. Every flight is documented. The How and Why of the design evolution is laid out clearly by these widely published expert authors. Problems encountered and overcome are described succinctly and pictured clearly.

The text begins with Forewords by Scott Crossfield and William Dana, both of whom were X-15 pilots and heavily immersed in the development process. An Author’s Preface follows that, then we get into the meat of the book with Chapter I, Antecedents, a well-written short history of the special experimental aircraft and the wind tunnel tests leading up to the physical manifestation of a flying X-15. A total of 12 chapters take us through the science behind the project, how shapes were tested, the bidding process, and why North American’s design proposal won out over the others. Other chapters tell us about how the flight path was laid out over Nevada and southern California, where the radar and communications shacks were built on various mountaintops to track the plane, along with the numerous emergency dry lake landing sites that had to be used more than once when things went badly. Simply launching each flight from under the wing of a B-52, then tracking where the X-15 actually went before landing back at Edwards Air Force base in California, required a large coordinated undertaking for the hypersonic flights that rarely lasted more than 10 to 15 minutes from ignition to landing.

Chapter 10, Tragedy Before The End, discusses the reasons for the death of pilot Mike Adams when he lost control of the X-15 and crashed. Chapter 12, Stillborn Concepts, takes the reader through what might have been had the X-15 program been continued. Rather than orbiting the X-15, the Mercury astronaut program took over that challenge, and the two surviving X-15s became display objects at the Smithsonian and Air Force museums.

Appendices A, B, C and D give us Selected Biographies of the key people involved in the X-15 project, a flight log for every flight detailing what happened, notes and citations to verify where the information came from for key points of the X-15 story, then an Index to close things out. It particularly gladdens my heart to see the engineers behind the design get some recognition for their work. The X-15, after all, did not design itself.

For me, this book is a quiet masterpiece. Graphic design and text blend seamlessly, making the book an easy, tech-savvy and informative read. If you know nothing about airplanes, no problem. The authors take the uninformed reader through the X-15 experience painlessly. Know a bit about airplanes? Then no problem, again. The authors use just enough engineering and flight terminology to keep the knowledgeable nodding and thinking, without leaving the non-aeronautical folk among us lost in the ozone. An amazing story, well told for all levels of reader interest. Visually stunning with photos and illustrations, many considered confidential at the time, of exactly how everything on the airplane worked.

I have to forewarn the finicky reader, however, that the book does suffer from a relatively large number of what I call “computer typos,” where the automatic spell check does not catch everything. For instance, text that needed correcting is left in—alongside the new correction being inserted as a replacement. This makes for odd constructions such as: “three readily identifiable three aircraft.” Another example, “1,500 horsepower with had an output.” Obviously, either “with” or “had” needs to go.

Another mild irritant was the liberal use of acronyms—ARDC, AFFTC, HSFS, WADC, SAS, FRC, NAS, BCS, AACB, HRE, WTR, PSTS, PDM, PCM, PMR, WRT, RAS, IFDS and many others—without a glossary for the reader to refer to. Not user-friendly!

When all is said and done, I really liked this book and recommend it highly to anyone interested in finding out what the X-15 was all about. A very good mix of technical and historical writing that left me feeling satisfied at the end.

If, however, you feel visually deprived after finishing Hypersonic, there are an additional 400 photos, not used in this book, available for viewing in the X-15 Photo Scrapbook (ISBN 978-1580070744), published concurrently by the same publisher.