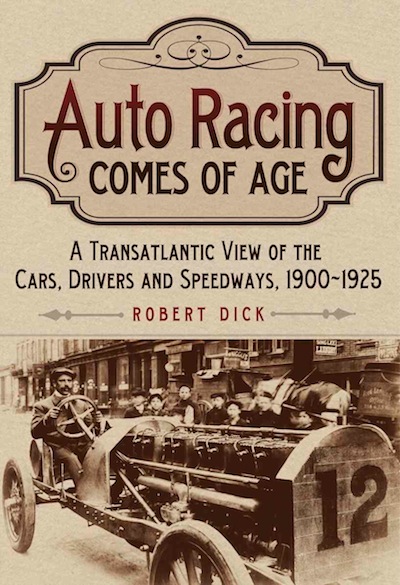 Robert Dick’s book uses a series of what are really more akin to vignettes rather than chapters at times to provide a look at various aspects of the automobile racing scene, American and European, during the first quarter of the Twentieth Century. Generally fairly short, crammed with detail—technical and otherwise—and occasionally offering rather pithy observations on the era, the chapters could be a bit daunting for someone not overly familiar with the era. Then again, that is probably the sum total of the criticism that might be directed at the book.

At first glance, some might draw the wrong conclusion when seeing the title of the third chapter: “Hippodrome Sprints.” Actually, Dick uses “hippodrome” in its literal sense, that is, a horse racing track, because those venues provided the basis for American automobile racing from the earliest days of the sport. Unlike many, Dick finds much to commend them as a “good school for the drivers.” That each hippodrome was actually different when it came to surface, turns, and straights forced drivers to learn how to adapt to a variety of challenges. In turn, this meant that the American racing cars were, by and large, built with the hippodromes in mind, not the road courses so common elsewhere in the world.

The subtitle is very appropriate given that Dick (who is German) does provide a transatlantic view of automobile racing during this period. Both sides of the Atlantic get consideration, with a general absence of the chauvinism or jingoism that all too often mars such discussion. As an engineer, Dick is, naturally, drawn to the mechanical nature of things, there being a wealth of technical information in the book. Even someone like myself, whose eyes tend to glaze over when discussions become focused on technical issues, found the chapter on aero engines not only interesting but even fascinating in how dots were connected and the general configuration of future racing engines came into being.

What sets this book apart is not only Dick’s obvious expertise and knowledge regarding this topic, but that the book itself adds to the experience of literally seeing automobile racing “come of age,” that is evolve and change. That the book is well-illustrated in addition to being well-written, with the photographs and drawings being located adjacent to the text, as they should be, enables that reader who is not necessarily that familiar with the topic to grasp the essential elements of the discussion and gain from it. This is the essential “goodness” of a publisher such as McFarland, which allows a book such as this one to not only be published, but also in a form close to what the author imagines helps the reader the most.

This is simply an excellent book, the sort of which are all too rare. Over the years, I have gained a great respect for Robert Dick and I have always found his comments and observations on automotive history to both articulate and informative. One hopes that along with his previous book, Mercedes and Auto Racing in the Belle Epoque, 1895–1915 these gems are only the first of many more such books!