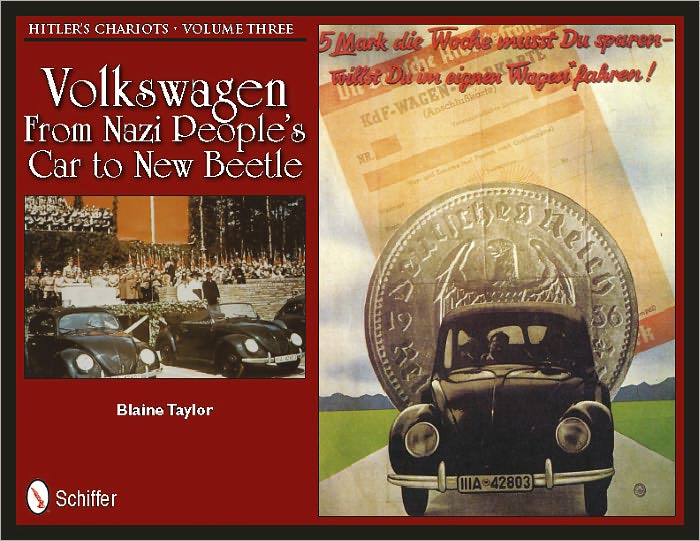 Over 21 million Beetles have been built since 1938, making it the longest-running and most-manufactured car of a single design platform to date. A people’s car indeed. It was neither the first nor the only one to bear that moniker or connotation but in its case, it stuck. Its success made it possible for its eponymous maker, Volkswagen, to grow into a multi-marque automotive group now well on its way to become the world’s largest and boasting some nameplates that are decidedly not people’s cars: Bugatti, Bentley, Lamborghini.

This book is the third in Taylor’s Hitler’s Chariots series and, finally, genuinely car-specific. It is also his second book on the VW and, strictly speaking, the prequel to that 2004 work, Volkswagen Military Vehicles of the Third Reich (Da Capo Press).

For background on the author and his approach we refer the reader to our review of vol. 1 in this series but hasten to say that this book is an improvement, in parts. That right out of the gate Taylor butchers (to name just two) the names of the birthplaces of his main protagonists—Hitler and Porsche—is an unpleasant reminder of the scholarly shortcomings of the earlier books. It remains truly baffling how a professional historian can be so loose with his research.

As before, the book quotes liberally from other texts, warts and all. Therein lies at least part of the problem. Just because something is printed somewhere doesn’t make it right. Looking at the fairly extensive Bibliography (which itself contains tons of typos when it comes to foreign-language titles) reveals many recognizable go-to books but, for instance, none of Karl Ludvigsen’s arch-reliable books on Ferdinand Porsche or the Beetle. The newest VW book, not counting Taylor’s own, is from 2003 and the newest general automotive title from 2005. While there are important newer books, even the older ones should have allowed Taylor to say more and say it better, or at least spell correctly. Once again, what redeems his book is the photographic record.

Taylor says he came to this subject in 1967 while searching in the Baltimore Sun’s (newspaper) “photo morgue” for “old Nazi pictures” and came across a photo of German Chancellor Adolf Hitler speaking at a 1938 Nazi rally in Wolfsburg (VW’s hometown) in front of a shiny Volkswagen Beetle. Unaware that the Beetle was more than a flower power icon (remember the year, 1967), Taylor shifted into historian mode and hit the books.

Unlike the first two books in this series, this one is brimming with technical drawings, and photos of design, development, testing, and production as well as facsimiles of memos and automobilia and sidebars for ancillary material. The Hitler/Nazi material dominates and even though Taylor says in the Introduction he’s taking the story up to the modern Beetle, he absolutely doesn’t.

So, again a mixed bag—and are we ever tired of having to say that and making allowances for the author’s slipshod accuracy! While there’s nothing new, the breadth of the illustrations is impressive, from period photos to ads to model cars to postage stamps, and really convenient to have in one place.

The WWII and photo buff will find this book interesting, the reader looking for solid Beetle or other economy-car history is better served elsewhere.