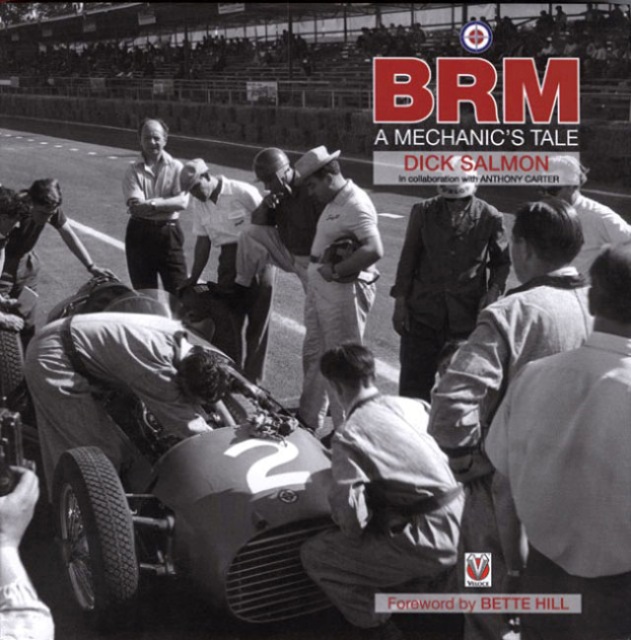 A linguist might point out the negative connotations of the word “tale” (fiction, untruth even), but here—absent any evidence to the contrary—we take it to mean “narrative of events,” in other words a story. Think of it as a memoir, interrupted by frequent elbow jabs. Wink-wink, nudge-nudge. The quote below notwithstanding, there is quite a bit of technical and historical detail here!

“. . . Unfortunately for the pig, the exhaust system ran underneath the foot well causing it to get rather hot. Now you must appreciate that the pig was only in a thin sack and, unlike Tony, had no shoes on.”

British Racing Motors was active in Formula One between 1950 and 1977, and for 16 of those 27 years (1951–67) author Dick Salmon was with the team as a mechanic. Founded in 1945 by racing driver and entrepreneur Raymond Mays (1899–1980) whose life-long ambition of seeing Britain succeed at the top level of international motorsport had already led to his co-founding of English Racing Automobiles (ERA; active 1933–1954), it would take BRM until 1962 to achieve the ultimate goal: Constructors’ Title and Drivers’ World Championship (for Graham Hill, whose wife wrote the Foreword).

And for a few years BRM was on a roll, coming second in the Constructors’ Championship 1963–1965 and once more in 1971. Along the way were high highs and low lows, typical of the rather spotty fortunes of a team that competed in 197 Grands Prix and won 17. As collaborator Anthony Carter writes, “. . . it was either admired for trying or condemned for failing. There was no middle ground!”

Salmon—who (b. 1925) was in his eighties by the time this book came out!—recaps his youth, schooling, National Service, and somewhat happenstance application at BRM for a job, any job, before launching into the subject proper. Raymond Mays and the origins of the British Motor Racing Racing Research Trust are very engagingly presented, giving the reader a good sense for the deeper meaning of this enterprise. Readers with a broad frame of historic reference will appreciate Alfred Owen (of Rubery Owen & Co.) likening his and his fellow industrialists’ support of the Trust to that of Lady Houston before them in the matter of the Schneider Trophy, an action that changed history but seems to be lost on posterity. The foregoing is meant to underscore that BRM was not just any old for-profit take-it-or-leave-it racing outfit but rife with symbolism. Which, in turn, has a bearing on the protagonists of this story, not so much in Salmon’s sphere of activity but among the principals.

Salmon’s take on life at BRM is that of someone in the trenches. Long hours, little pay, lots of travel, superhuman efforts to fix this and that only to have the car fall apart anyway, jokes, tragedy. Moss, Clark, nameless waitresses, Hawthorn, Hill, the pig above, reporters, Chiefs of Police—some names you know, many you don’t. All this makes up the tapestry of the life Salmon describes here with wit, affection, and knowledge. The photos have that same haphazardness: Fangio and all the BRM bigwigs on one page, a gas station receipt for a fan belt on the other.

The book is most comprehensively illustrated in all regards, from Salmon’s youth to historical photos of Mays and vintage racing to the BRM years. There’s also a large selection of automobilia such as posters, ads, ticket stubs etc. The sources of the photos are not disclosed. One assumes that many must be Salmon’s own. Judging by the particular colorcast, some/many of the color ones may well be Carter’s (compare to his book Motor Racing).

Salmon wasn’t with BRM any longer at the time of a serious low, the H16 BRM, having moved on to Lotus Cars as a quality engineer. But he did cross paths with BRM once more, under sad circumstances. When the firm then called Stanley BRM closed and was put up for auction by the Owen Organization, Salmon was hired to rebuild the racing cars in preparation for the 1981 Christie’s auction at Earls Court. If Salmon has harsh words about anything it is for Louis Stanley, the husband of Sir Alfred Owen’s sister Jean, for his “freeloading extravagance” and the folly of building the complicated and bulky H16.

Provided you can read the small type you will find the Index satisfactory. With or without the BRM specifics, the book is a testament to a particular era, written from an uncommon perspective, and in an entertaining manner. Anyone with motorsports interests ought to find it worthwhile. Even if you already know every dry and clinically correct fact and stat about British Racing Motors, this book will tell you and show you things you could not possibly know—unless you were there. And even then it might surprise you.