Rolls-Royce and Bentley in the Sunburnt Country: The First Fifty Years of Rolls-Royce in Australia 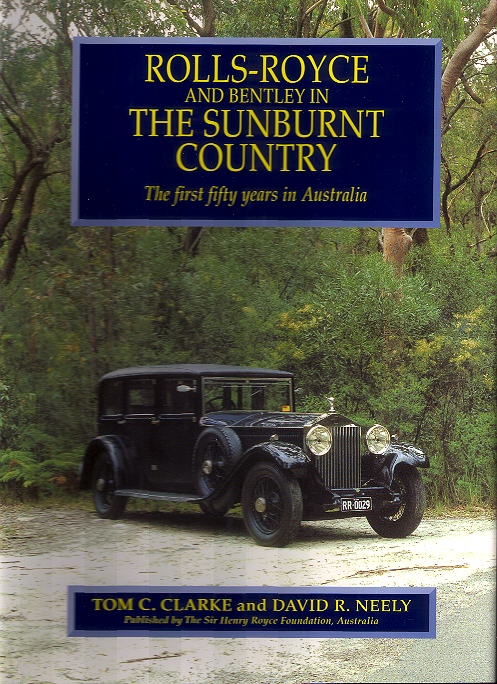 Suddenly the light came on. All at once I realized that what I had once held to be sacrosanct was, if not tarnished, at least much more ordinary than I had previously thought. Before me was a book the like of which I had not encountered before. A book of such depth and scholarship that other works now appeared shallow and inadequate. A book so full of information I became sadly aware of how little I knew. I know now how Mr. Toad felt when he first saw a motorcar.

I am, of course, referring to Rolls-Royce and Bentley in the Sunburnt Country. That it was written by authors domiciled half a world from each other astounds me. That they wrote it to the benefit of the Sir Henry Royce Foundation of Australia rather than their own profit is nothing less than dumbfounding. This is what a Foundation should be all about, others please note.

This is a large-format, profusely illustrated history of the Rolls-Royce company’s first fifty years in Australia. What might at first appear to be just an interesting sidebar in the company’s long history becomes a fascinating tale of the trials and tribulations involved in selling, owning, and operating Rolls-Royce motorcars. This is entirely due to the skill of the authors. It is clear that Messrs. Clarke and Neely have studied the factory records in great depth in order to bring to light so much amazing information. Every chassis imported new, from the early 20 hp up to the end of the Silver Wraith and Bentley R Type era, is identified with a description and history of each car, in many cases up to the present time. In addition, many cars bought in London and then shipped out to the colony are covered with the same remarkable diligence.

That the Rolls-Royce torch was carried in Australia by such colorful and resourceful characters adds greatly to the story, which is exceptionally well supported with a plethora of superb period photographs. Before the advent of this book I have never understood the degree of reverence that Australian enthusiasts hold for Mr. Bert Ward. Now I know.

The volume consists of some 478 pages, almost every one of which is absolutely dripping with absorbing facts, figures, and wonderful anecdotes. The contents are well researched, fresh and original, not rehashed from earlier works—as has become so commonplace. I was also very pleased to read the chapter on the histories of the various Australian coachbuilders, about whom almost nothing has been previously written. Mention must also be made of the fabulous indeces, which are so complete that one can find a car or any of its owners in minutes by referring to one of the three very comprehensive tables. Surely the hallmark of a masterpiece.

This is undoubtedly my choice as “1999 Book of the Year,” if not the decade. It should be compulsory reading for anyone even contemplating writing about Rolls-Royce and Bentley motorcars. This is exactly how a book should be. Company founder Henry Royce’s dictum “Whatever is rightly done, however humble, is noble” can be applied to this book just as much as to his cars.

I have long advocated that publisher Lawrence Dalton (the old Dalton Watson firm) should be Knighted for his services to Rolls-Royce literature. After reading this magnificent work I now propose that both Tom Clarke and David Neely each be rewarded for their efforts with a Dukedom.

It is inevitable that research into complex, data-rich topics does not reach certain finality. At the time of publication of this book in 1999 the authors invited readers to submit data, corrections, leads, comments, and new/additional photos. This material has been combined into a currently 80-page Supplement which can be freely downloaded on the website of the Sir Henry Royce Foundation of Australia. Further editions of the Supplement are planned as more details come to light.

Rolls-Royce and Bentley in the Sunburnt Country:

The First Fifty Years of Rolls-Royce in Australia

Blood and Smoke: A True Tale of Mystery, Mayhem, and the Birth of the Indy 500 »
« X-Plane Crashes