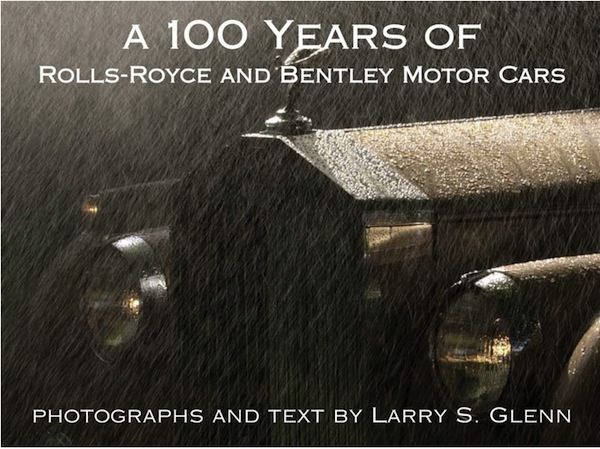 “The history of Rolls-Royce and Bentley has been written, rehashed, and written again. There are some fine books on the market and if you’re reading this one you probably own one or two or twenty of them.”

Right he is. There are piles of books on these illustrious marques. To the aficionado there’s little that hasn’t already been said, often definitively, about a company that’s more than a hundred years old. And he’s also right when he says that his book is “basically just the opposite” of the history books: this is a photo book.

And what photos they are! Glenn isn’t just any old camera-toting enthusiast who has the urge to inflict his “art” on the unsuspecting public. He is [a] a professional photographer (of all sorts of things, not just cars), with a fine arts background to boot and [b] so low-key about his work that it took years of prodding by his friends for him to finally cough up a book.

For years his car photos could only be seen by a finite number of people, the readers of a private, subscription-only, award-winning car club magazine (The Flying Lady published by the Rolls-Royce Owners’ Club) whose principal photographer he was. For over ten years, almost every single issue was graced by a cover shot of his and a good number of the interior photos sprang from his mind too. His travels have taken him here and there and everywhere—and filled his files and hard drives with thousands of photos. This prolific output inevitabily resulted in a trove of images that were either not used or were specifically taken for archival purposes or future use. Some 300 of these have at long last been gathered into book form to offer a visual primer on the history of Rolls-Royce and Bentley cars. Even those photos that are “just pretty pictures” in which the car is the car is the car are beautiful to behold. The lay reader may simply see a decent photo but photographers will recognize the technical competence and esthetic sensibility that elevates the imagery. 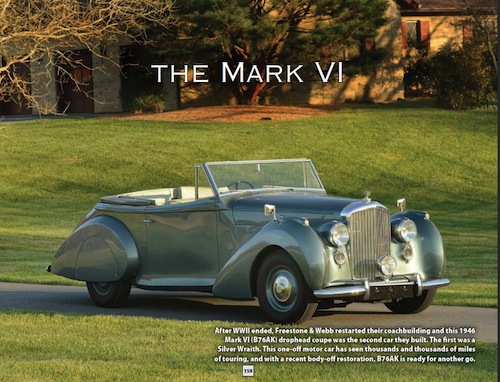 Just to say it once more, this is not a history book. What minimal narrative there is consists mostly of introductory remarks for the different models and brief photo captions. Glenn isn’t just a photographer who seizes the proverbial Kodak Moment, he also sees the story behind a photo. Now, not every photo here can be that sort of perfect mixture of car, location, owner, and backstory but many are.

True to the title, the book covers almost literally one hundred years, from the 1907 Silver Ghost AX201 to a 2008 Continental GT. The cars are presented chronologically by series and even though the coverage proper begins with the Silver Ghost a few words are devoted to the pre-Ghost cars (the firm started in 1904).

The point of the book is to show the widest possible variety of styles and this criteria drove the photo selection, not the intrinsic “importance” of any one car. Newcomers to the marques are thus offered a wide-ranging overview—even if the old hands may grumble that this or that special car ought to have been included (especially if they own it).

Given the elevated place Rolls-Royce and Bentley cars occupy on the automotive food chain—important owners, important coachwork, small numbers, high prices, few alike—it is a peculiarity of the Rolls-Royce/Bentley community to keep track of the cars by their one unique, unalterable attribute: the chassis number. Nothing that is published in the Rolls-Royce/Bentley world that has aspirations of staying power and reference-level significance can afford to not list chassis numbers. No worries here; in the best forensic fashion, each car is properly identified by chassis number and coachwork particulars, and at the end there’s a multi-page tabular index in year order.

In a way, an all-out photo book is the most enticing way for new readers to discover a marque. The hardcore history can wait until later, after the imagination is already saturated with the often truly astounding variety and quality of custom coachwork, paint, trim, accessories and all the other features that make Rolls-Royces and Bentleys different from other cars.

This is a self-published book of uncommonly high production standards. The reason for that is that Glenn didn’t self-publish to cut corners and crank out a book on the cheap. He invested in professional support, and the writing/editing, proofreading, page design, and photo reproduction/printing/binding are of a level that surpasses many a commercial product! To raise the funds for that, Glenn used a sort of crowd-sourcing by pre-selling a 14-page sampler of the book to a large enough number of “subscribers”—sixty in this case—to be able to lock in all the professional services he would need to subcontract. But even when all 1000 copies are sold, the fifteen months of work he poured into the project will never be paid for in terms of income, only in terms of the satisfaction of a job well done.

One World, Big Screen: Hollywood, the Allies, and World War II »
« Motorcars of the Classic Era