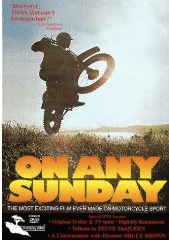 Every kid needs a hero. Movies and sports work hard to supply.

Bruce Brown became known for his visually arresting surfing documentary Endless Summer. His camera captured the same sense of danger—and the people who respond to it—in another film titled On Any Sunday. Much of it was shot at motorcycle competitions that were held over many weekends. It is colorful, and noisy—and quite instructive.

Viewers follow American Motorcycle Association Championship contender Mert Lawwill as he drives his van full of Harleys to dirt and road courses across America seeking to again earn the AMA championship laurels. Brown’s film makes it plain that this is a lonely journey, filled with long hours, hard work and few luxuries. As we watch, it is impossible not to be impressed with the quiet, determined Lawwill.

As it happens, Lawwill also has a famous riding friend and supporter in movie star Steve McQueen. McQueen had established his riding bona fides (on-screen and off) in The Great Escape. Here in On Any Sunday we see him riding in local enduros and desert runs under a false name in order to stay under the radar of other riders and the studio bosses who didn’t want their investment damaged.

Almost incidentally, we are introduced to a third character who rides with McQueen. At the time, Malcolm Smith was only known to those who followed Trials-type competitions. In Trials, riders compete, one at a time, against the clock over an extremely difficult obstacle course. Only the best ride trials. Successful competitors need patience, judgment, strength, and imagination to win. Malcolm Smith is an International Trails champion.

From the moment the slight, bespectacled, quiet Smith rides into the picture, you know that Brown has found a “natural” and the story moves from Lawwill and McQueen to this extraordinarily gifted rider. Brown is obviously awe-struck too as the tone of his very engaging narration reflects. He has crafted a film that allows us to cheer for three quite different characters, each of whom is striving toward a different goal in this dangerous and very exciting sport.

Those of us who watched this film in the theater when it first came out expected to see a movie about a movie star who was one of us and an AMA Champion. Not surprisingly, forty years later, riders remember it as the movie about the extraordinary Malcolm Smith; even today, a hero who does not disappoint.

I can’t leave this commentary without relating a recent personal experience. I was being interviewed in my cluttered office by a reporter from the Providence Journal. At the conclusion of the formal interview, just as he was leaving the young man inquired about the posters on the walls. I explained to him that I had posters or pictures of the five men whom I most admired. Some he recognized but others he didn’t so he asked me to identify all five. I replied, “In the realm of the arts, there are William Shakespeare, Leonardo da Vinci, and Giuseppe Verdi. And in the world of motorsports: Juan Manuel Fangio and Malcolm Smith.” Sad to say that young interviewer had never heard of Malcolm Smith.

But you have, and through the magic of the VCR or CD/DVD player, you can watch On Any Sunday as often as you desire.