Tales from the Toolbox: A Collection of Behind-the-Scenes Tales from Grand Prix Mechanics 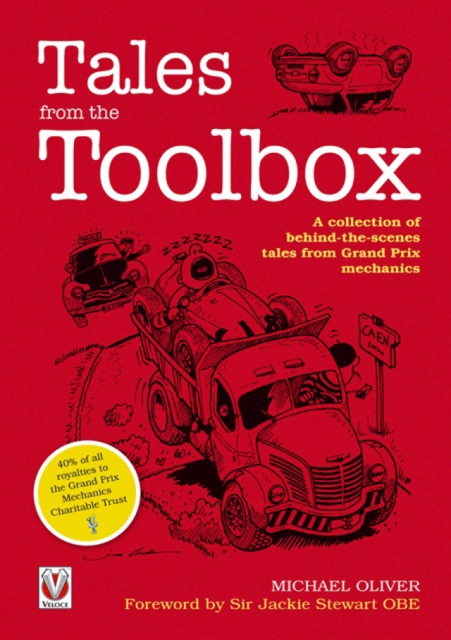 A professional motorsports writer, Michael Oliver has great affinity for his subject, as befits someone who was only weeks old when he was taken along to F1 races, and he likes to say that he learned his numbers by looking at the roundels on the side of race cars. He is the author of definitive books on two of Lotus’ most iconic Grand Prix cars, the 49 (Veloce, ISBN 978-1904788010) and the 72 (Coterie, ISBN 978-1902351063). With Tales from the Toolbox, a delightful book packed full of anecdotes from the pit lane’s unsung heroes of the 1950s, ’60 and ‘70s, Oliver enhances his reputation still further.

The book’s Spartan format will not be to everyone’s taste. A paperback, it has densely-packed text, small photographs, and far too much marketing material from publisher Veloce: a page of titles at the front, two pages of book covers at the back, and no fewer than six of the 11 chapters end with reminders of Veloce’s web site and its special offers and gift vouchers. But do not let this stop you from enjoying the quality of Oliver’s narrative, the fascinating stories he has assiduously collected, the 30 pen portraits of some of the mechanics he interviewed, and the photographs made available to him from their private collections. A further reason to buy the book is that 40% of all royalties go to the Grand Prix Mechanics Charitable Trust, whose founder, Jackie Stewart, provides the Foreword.

The book has clearly-themed chapters, and Oliver believes that it is best experienced by dipping into it rather than reading it in one sitting, because the tales are individual vignettes rather than one seamless story. They speak of a different era. Europe had no open borders or common currency, and the roads left much to be desired. Teams travelled to race meetings in converted coaches or home-made specials, and crossing the Alps played havoc with clutches and transmissions on the way up, and brakes on the way down.

It was a more gentlemanly time too, when competition was restricted to the track, and mechanics from rival teams would willingly help each other out in the paddock. One example from the 1968 Mexican Grand Prix speaks volumes. Graham Hill of Lotus, Jackie Stewart in Ken Tyrrell’s Matra and Denny Hulme of McLaren were vying for the World Championship, and Lotus chief https://speedreaders.info/295-colin_chapman_by_k_ludvigsen had come up with a way of giving Hill an advantage—a feathered rear wing to cut drag on the straights. As his mechanics set about yet another all-nighter to undertake the work, they were able to rely on the other teams to provide the hundreds of rivets required, and the Tyrrell and McLaren mechanics brought a cake into the Lotus garage to wish them luck.

Oliver devotes a chapter to “the mechanic’s gallon,” the practice whereby a mechanic, doubting his boss’ calculations of the amount of fuel required to ensure a car reached the finish, would slip a little extra into the tank. Infamous examples of great drives thwarted by an empty tank are here: Jochen Rindt at Silverstone in ’69, Jack Brabham at Brands Hatch in ’70, and the cruellest case of all, which ended one of the greatest drives of all, Jim Clark at Monza in 1967. In regaining the lap lost on the leaders to a puncture, Clark clearly set a much faster pace than he had in practice, which was the only reference point available to Chapman when he calculated that 31 gallons would get the job done. Chief mechanic Dick Scammell ordered the man on Clark’s car, Allan McCall, to put in 33, and McCall actually put in 36. Yet still Clark ran out of fuel and lost the lead on the last lap—and still Chapman lectured McCall for disobeying orders!

Oliver captures the many highs of the mechanic’s life of yesteryear: championship and race wins, wild parties, and pranks with acetylene bombs. Some are moments of historical significance, like Vanwall man Derek Wootton’s memories of his team’s three cars, resplendent in British Racing Green, dominating the front row of the 1956 Italian Grand Prix, in the backyard of Ferrari and Maserati. This is the point from which Britain’s climb to Grand Prix ascendancy can be charted.

But the lows are also highlighted: the strain on marriages, the races lost in the closing stages, and the fatal accidents. Oliver deals sensitively with this most painful aspect of life in the pit lane. Just as the racing driver must believe his trade will never cost him his life, so, it is clear, the mechanic must believe he will never be the cause of a fatal accident to his colleague. And just as journalists of the ‘60s and ‘70s learned to keep a certain distance from drivers, so did mechanics. Allan Challis, who worked for BRM, Lotus, Shadow and Williams, is eloquent on the subject. After losing Mike Spence,Pedro Rodríguez and Jo Siffert, “all of a sudden you are thinking ‘I shouldn’t be too close to these guys’ because it’s there: every time you do the seat belts up and wave them down the pit lane, they might not come back.”

The images may be small, but many are excellent, often capturing personal moments denied to professional cameramen. A charming shot shows Clark in bright sunshine, wearing helmet, overalls and cardigan, fast asleep in the cockpit of his Lotus. Another captures him in the Indy garage in 1967, staring forlornly at his recalcitrant car; in the background, Chapman and Hill look equally despondent.

A detailed Index further enhances the value of this splendid book. No motor library is complete without it. Three cheers to Michael Oliver!

The Space Shuttle Program: How NASA Lost Its Way »
« The Car Design Book