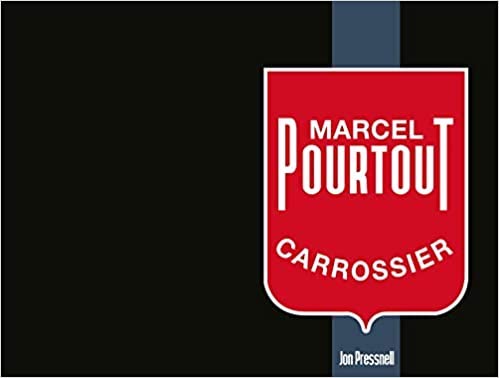 “How should one assess Carrosserie Pourtout? There is plenty of casual talk about it being a famous coachbuilder—one of the great coachbuilders, even. But this sort of thing represents the oft-found practice of journalists and writers seeking to bolster their own standing, by way of a little name-dropping to display their supposed knowledge.”

You know about first impressions: a firm handshake, look the other fellow in the eye, say something . . . authentic. That’s how this book introduces itself, right from the first words, those being the Foreword penned by company founder Marcel Portout’s great-grandson aka Master of Archives. The reader immediately grasps what this book can do, why it is needed, and how it will go about its business.

In the Preface, author Jon Pressnell, a veteran journalist and automotive historian, does not beat around the bush in pointing out that surviving primary sources such as invoices, correspondence, or job sheets do not easily lend themselves to reconstructing a cohesive company history. There had been two prior attempts at it, the first by Marcel’s second son, Claude, who had once upon a time begun a handwritten memoir and a list of known coachwork commissions (reproduced here in an Appendix) and later by Claude’s son in law, who turned his trove of research material over to Pressnell. So, critical mass had been reached, and now we have a fine, thorough account. That blanks remain is not for lack of trying, and any time “imponderables and informed hypotheses” are all that is to be had they are so identified.

Left page: such fastidious handwriting! Observe in the top right an annotation in red (and in a different lettering style). It says “dodgy customer” which, if it applies to the name at the top of the page would be a real bummer, for Henri de Corvaia was the firm’s largest trade customer after Darl’mat.
The photo below explains why Pourtout could not afford dodgy customers—this 1934 letter to the taxman pleads to be granted an installment plan to pay outstanding taxes, saying that “any impression of prosperity on the part of Marcel Pourtout was misleading.”

It is of at least peripheral relevance to note that Pressnell lives in France. Obviously, this allows him to commune with the natives but more importantly, his visual vocabulary includes Pourtout products of which readers outside of France would have only limited awareness: commercial vehicles. This essential bread-and-butter work is how the firm founded in 1925 was able to soldier on until 1994. In fact, is still operating today, as a repair business. A good 40% of this book is thus devoted to content that is a far cry from the bespoke and aerodynamically distinctive confections that today’s concours visitor associates with the golden era, pre-WW II, and such names as Emile Darl’mat and Georges Paulin, the leading French stylist of his day.

Wienermobile . . . à quoi ça sert? Wouldn’t you rather have a driving vacuum cleaner?? This is a Hoover “boule” from 1961.

The “car stuff” is one thing, and for many readers probably the only thing, but it is worth saying that Pressnell’s writing style is eminently readable and anyone attuned to the finer points of language and phrasing will find themselves drawn into the story right away, a journey unimpeded by the ambiguous punctuation so often found in British English, or, gasp, typos. Attention to detail is evident everywhere, from maps with scale indicators to photo credits and footnotes. This is neatly illustrated in regards to an entirely minor matter: when Pressnell interviewed members of the immediate family about a ca. 1932–34 contract for kitting out ten Air France aircraft, they could not recall ever hearing about it before! Moreover, if you know your noteworthy contemporary experts on French automobiles, and owners of Pourtout cars, you will find they embraced this project warmly.

It always bodes well if a writer has the luxury of easing the reader into the story; in this case it begins with mini bios introducing a good number of second- and third-generation Pourtouts, most of whom—male and female—worked at the company in various capacities and tours of duty. You may not care that Mme Pourtout received a medal for having borne ten children, and it has no bearing on how, say, the landau irons on a Weymann body work but it adds depth.

There are almost a hundred pages of ancillary material: lists of surviving cars, commission numbers, and special features about certain customers and cars. There is a fine Index, and, as in pretty much all Dalton Watson books, a deft design in the true sense of the word: demonstrating skill and cleverness.

When you’re done reading the book you can reflect on the opening quote, above, and count yourself to now be properly enlightened, as opposed to being a poser with “supposed knowledge.”