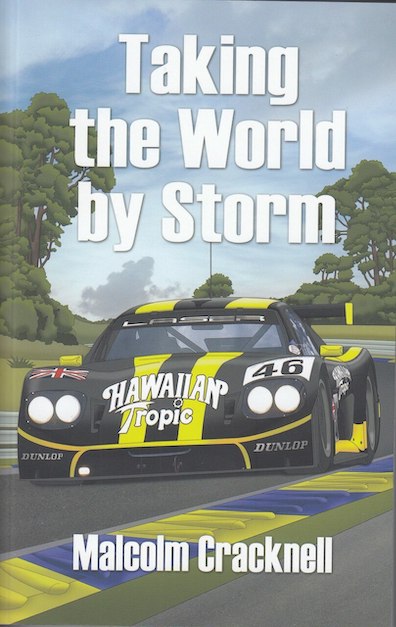 I read a lot of factual books about motorsport, and I read even more modern fiction, and it came as a surprise to encounter a book that embraced both genres. Taking the World by Storm belongs in the same alternative history genre as books such as The Man in the High Castle by Philip K. Dick but, instead of the vast canvas of World War Two, this book’s theme is the 1997 Le Mans 24 Hour race. Malcolm Cracknell’s book is told in the first person from the perspective of Ryan Smith, the engine builder and race engineer of the Laser Strike racing team, which is a very thinly disguised version of the Lister race team owned and managed by the real-life Lawrence Pearce, for whom the author worked in period.

This 208-page softback will not be in contention for the Pulitzer or Booker prizes for fiction but, unlike some books that have, this book is what we used to call a rattling good read. The fact that it is a little short on characterization, maybe a little too reliant on dialogue to carry the plot, and perhaps over-demotic for the more genteel reader won’t matter one jot to most people, because this book isn’t a work of literature, but it is a very readable page turner. 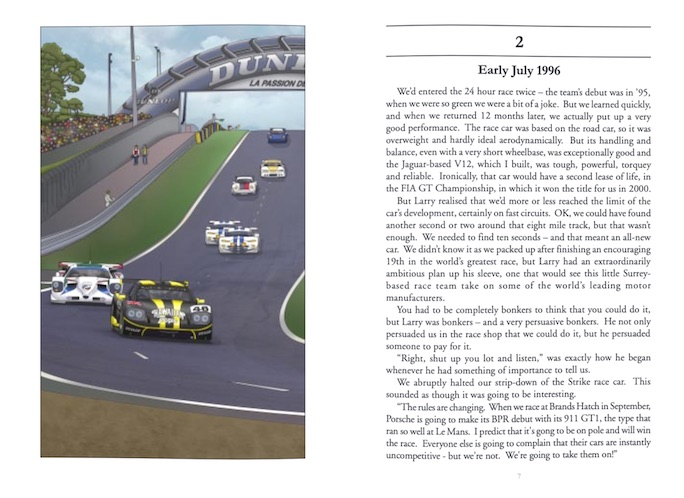 Although the core plot is fictitious, much of the detail—whether rule bending, outright cheating, incidents on and off track and the competing teams and drivers—is either faithful to real events at La Sarthe or at least based upon them. Le Mans is not an event I follow with the diligence which many of my countrymen apply, but most dilettantes like me will quickly identify  the real-life counterparts of the Laser Strike drivers “Arnie Wallis” and “James Wheeler” and the same applies to many other of the dramatis personae. Helpfully, the author even provides a detailed epilogue that enables the reader to separate fact from fiction and, because Le Mans is arguably the world’s most famous endurance race, perhaps even eclipsing the Indy 500, there is a very rich seam of drama for the author to mine. I especially enjoyed the creative approach to jump starting a race car, which was based on James Weaver’s account of how his March Nissan was restarted by a hapless mechanic at Le Mans in 1986.

It is a truth universally acknowledged that, in the public’s eye at least, it is the driver who wins a Grand Prix but it is the car that wins Le Mans and the book echoes this. The Laser Strike, and especially its mighty V12, are the real heroes of this book. And whilst I won’t spoil the rollercoaster ride of the plot, let me just say that Colin Chapman would have approved of just how narrowly the margins were shaved in the pursuit of victory . . .

I have read comparatively few motor racing novels; I found Bob Judd’s books both readable and enjoyable, in contrast to Alastair Maclean’s The Way to Dusty Death, a book that, if described as abysmal, would be to endow it with a literary merit it doesn’t deserve. I might also argue that, in a sport whose heritage include triumphs such as Brawn GP in 2009, tragedies such as Le Mans 1955 and the drama of Toyota snatching defeat from the jaws of victory at the same race in 2016, there is not a pressing need to make things up. But nearly every fictional work about the sport takes the well-trodden path of treating the driver as the central character, and in Taking the World by Storm it is refreshing to read the story of a race in which the drivers are almost peripheral. The human interest centers on the charismatic and autocratic team boss, Larry Payne, and his loyal band of workers, and the book vividly conveys the dirty-fingernailed, sweaty-browed, pressure cooker atmosphere of a race team fuelled by junk food and sound-tracked by grunts and muttered curses. This is an environment very far removed from the clinical, data-drenched sterility of the modern Formula 1 team, and it is all the better for being so.

Although anybody with even a passing interest in motorsport is likely to enjoy the book, I suspect that the author’s target readership lies amongst what is sometimes termed the “barmy army” of Brits which makes the pilgrimage to Le Mans every summer. These guys (and they are mainly guys) won’t only be able to read about the sort of team that is often adopted as their favourite—rooting for the underdog is our national pastime—but they will also read about themselves. Because the fevered and vocal crowd, often as exhausted and emotional as the teams themselves, is as much a part of Les Vingt Quatres Heures du Mans as the Mulsanne Straight, Arnage, or Tertre Rouge. In this book, aided and abetted by scantily clad Hawaiian Tropic girls and deluged by free T shirts, the crowd becomes an important part of the drama.

Malcolm Cracknell was a teacher before becoming the founding editor of dailysportscar.com (online magazine for GT and sportscar enthusiasts) in 1998 until, sadly, in the words of the book’s postscript—“the fun (mostly) was terminated by sudden ill health, in 2008.” The author’s endearing enthusiasm for and profound knowledge of Le Mans will make this book an essential companion for anyone who either makes the pilgrimage to La Sarthe or who feels the compulsion to check race positions in the early hours of a certain weekend every June.