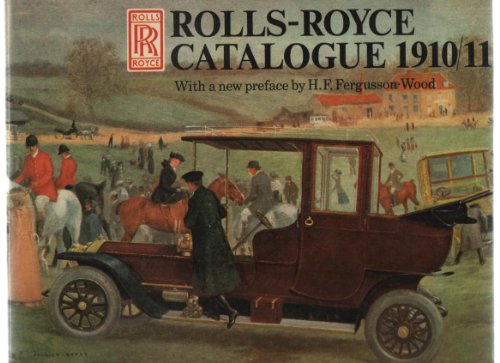 “The Rolls-Royce Car is bought by people who will have the Best, and Nothing but the Best.”

Few people today can truly comprehend how high Rolls-Royce raised the bar with its first production model, the car that would become known as the Silver Ghost and is featured in this reprint of a sales catalog.

Rolls-Royce was above blowing its own horn. The engineering excellence of the car spoke for itself and every journalist who experienced it would quickly run out of superlatives—and Rolls-Royce was not shy about using their words to extol the virtues of the car to both prospective customers and the slack-jawed masses who could only dream of owning one.

When this thin volume fell into my hands quite unexpectedly I initially ignored it as a fun but inconsequential glorified sales brochure from 100 years ago. Wrong. It contains a wealth of social history. The way it is written and presented to the public shows the reader what the attitudes of the time really were. Reading this little book is like time-travelling back to a lost world. The convoluted but correct sentence structure (much like the sentence you are reading now) involved the use of logic, dry humor, innuendo, and a working knowledge of untranslated Latin phrases, like si monumentum quaeri circumspect to make a quiet but important and possibly amusing point, all of which makes the text almost unreadable by those immersed in today’s world of short Tweet bursts and fast film edits. Even I drifted off and got lost occasionally. Frequently, by the time the proverbial punch line finally arrived, I’d forgotten the joke.

A slower age prevailed in 1910, one that prided itself on maintaining mental focus at all times, as opposed to today’s frantic world that seems to pride itself on attention deficit disorder. A speed of 22 miles per hour back then was considered “fast” on a public road, and actually completing a very long car trip without a breakdown was the exception and not the rule, and a feat that required vouchers from the Royal Automobile Club to substantiate such an outrageous claim.

However, the basic perceptions of what constitutes automotive luxury have remained the same over time. Elimination of vibration and silence of operation were as important in 1910 as they are in today’s market. Tremendous power relative to the rest of the market, with control and flexibility of operation, were obvious points of pride, and still are. Quaintly, having headlights on a car back then was considered an option, and not required by law. Speedometers and cast aluminum license plates were also options for a purchaser to consider. Weighty decisions, indeed.

The catalog seeks to enlighten buyers as to how a Rolls-Royce would fit into, and befit, their lifestyles. Then more than now, only a certain “class” of owner could afford a Rolls-Royce. This explains why the catalog isn’t awash in technical minutia but, for instance, discusses the “Loan of Servants” and urges the buyer to treat the visiting Rolls-Royce repair man (who came to your home once a year from the factory for a free check-up of your car) as if he were a full member of the servant staff. No shoddy treatment, please.

The apparently candid photos of street scenes from 1910 show the Rolls-Royce owner languidly visiting high-end stores with servants carrying newly purchased hat boxes and fishing tackle, or dismounting at the Ritz Hotel for their stay in the city. My favorite photo, titled “Shopping at The Maison Lewis” clearly shows an angry dowager of means, hands on hips, glaring at the cameraman because he’s taking her picture. The impertinence!

Knowledgeable observers will note that none of the cars shown here carry the famous Rolls-Royce mascot, the Spirit of Ecstasy hood ornament. It didn’t exist yet! In fact, the artist whom Rolls-Royce hired to draw the six color plates for this catalog is the very Charles Sykes who would later also create the mascot.

Sykes’ color illustrations show how the car is expected to be utilized by the new owner; all are titled “Arrival . . .” and show scenes that go with the Rolls-Royce lifestyle. My favorite is “Arrival at the Opera, 1909.” Five beautiful women have just stepped out of a Rolls-Royce and are flitting from car to theater entrance as if they were fairies floating toward nirvana.

The book consists of a Preface (Fergusson Wood had worked at Rolls-Royce, had first-hand experience with the coachbuilding business, and would go on to become a Director at Jack Barclay Ltd.), followed by a Contents page, List of Illustrations, and a long Independent Opinion written by The Times Automobile Correspondent under the nom de plume “Auriga.” No typographical errors were noticed, which in itself makes the book an oddity in today’s slap-dash world of hasty desktop publishing.

With a new preface by H F Fergusson-Wood

Posted Under: Automobiles, British | Author: Bill Ingalls | No comments yet