The Rolls-Royce Armoured Car: Its Substance and Its Place in History 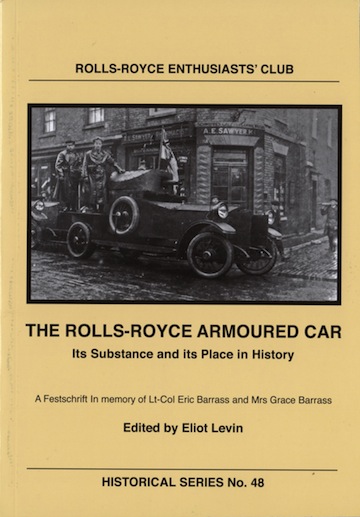 A further subtitle for this volume reveals a legendary name, a titan in the Rolls-Royce Enthusiasts’ Club in Great Britain: “a festschrift in memory of Lt-Col Eric Barrass and Mrs Grace Barrass“. Eric Barrass was that club’s long-serving General Secretary, a luminary whose prodigious work created the huge club that the RREC now is and its associated Rolls-Royce Foundation.

Throughout his time with the RREC Barrass worked on a book about armored cars. It was eagerly anticipated but never appeared during his lifetime because he was too busy in club life. Other than tank historian David Fletcher nobody knew more about Rolls-Royce armored cars than Barrass. When he died aged 98 in 2012 it was feared his work on this subject would be lost. It was largely handwritten or typed (that portion often the work of Eliot Levin), and not yet fully organized. Some looked at the task and despaired but club stalwart Eliot Levin took up the challenge again and this time laboriously entered it all into a computer, taking care to retain Eric’s entire text and “voice” and only adding where necessary. He arranged Eric’s material chronologically and, despite some gaps, brought together the story Eric had set out to tell. It is a remarkable tribute to a late friend to produce this book at all, let alone with the detail Eliot has achieved.

All in Eric’s inimitable, breezy, style the book covers the origins of armor, gunpowder, the gunmakers, and then the Rolls-Royce involvement begins. Here Eric is in his element as a true aficionado and as a military man himself. The story becomes absorbing because he puts the cars into battles and we see their strengths and weaknesses, as well as the caliber of the men who crewed them.

There are 71 pages of photos, many not seen before, and a remarkable group of appendices created by Eliot Levin, Robert Vickers, and Mike Evans. Three reminiscences from former armored car crews complete this portion of the book. Rolls-Royce Ltd. was very proud of its contribution to the Great War—aero engines for planes and blimps, staff cars, and armored cars—and none was prouder than Eric Barrass in the years that followed. The book is a tribute to his steadfastness and Eliot Levin’s resolve.

This is no.48 in the Historical Series.

Its Substance and Its Place in History