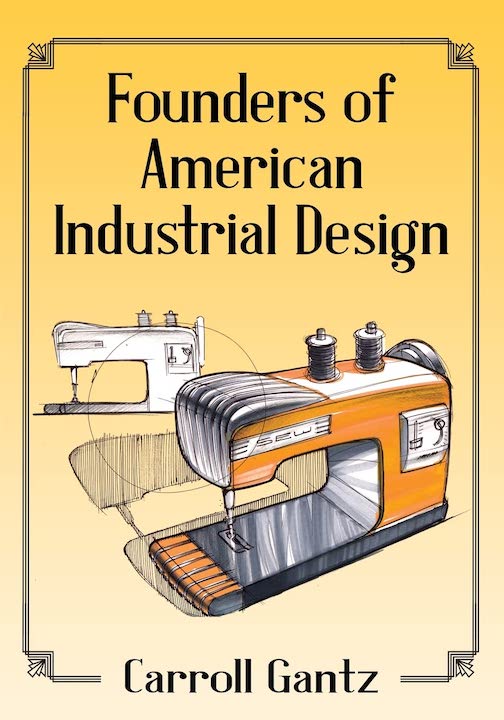 This comprehensive narrative is well populated with the superachievers and influencers in the world of industrial design from the 1920s to well into the 2000s along with considerable information about each. Rest assured, despite its 2014 publication year, copies of the book are readily available from its publisher McFarland and it’s as wonderful a read as it is a usefully informative reference for it is well indexed along with having both a bibliography and chapter end notes.

Author Carroll Gantz let chronology guide the order of his identifying and telling about the notables of industrial design. A reader immediately realizes the extent of his research and care in writing this, his sixth and last book for Gantz passed at age 84 the year following its publication. Gantz was a fine writer as well as an accomplished industrial designer with Dustbuster vacuums one of his more universally recognized designs. In the industrial design community he was revered and respected for his “dedication to recording and sharing the history of his profession.”

As you read, you’ll find familiar names and meet some likely heretofore unknown to you. Among the well-known certainly is the creator of the Dymaxions. Why plural? Because Buckminster Fuller had created two; a Dymaxion house he designed in the 1920s but that wasn’t constructed until 1945. The other was, of course, the Dymaxion Car seen on pages immediately below. It was created in concert with Isamu Noguchi. Fuller’s part was providing the physical parameters which Noguchi utilized to create his plaster model. Subsequently, in 1937 three actual vehicles were built utilizing Ford V-8 power situated in the rear. The only Dymaxion of those originally-built prototypes extant today is in the National Automobile Museum in Reno, Nevada. 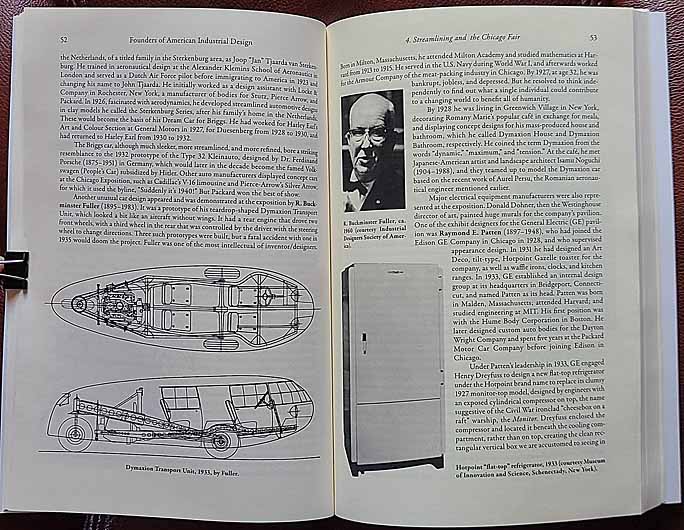 One of those less familiar names we meet on the same page pair above is Raymond Patton who was responsible for hiring another famous name, Henry Dreyfuss, to design a flat-topped refrigerator that would be produced under the Hotpoint brand and replace its monitor-topped model. 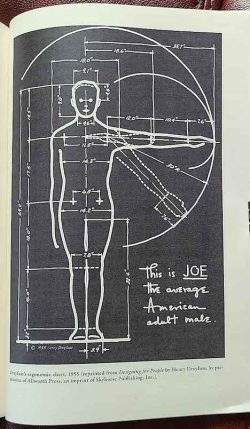 Dreyfuss was, of course, one of the more prolific as well as enormously influential both within and outside the design community. The drawing at left was perhaps one of his most lastingly influential concepts. Since Dreyfuss offered this, the typical anthropometric Joe and his partner Josephine in 1955, they have standardized and guided the design of just about everything with which humans interact.

Ironically there’s a photo of Henry Dreyfuss on the page below but not because he had anything to do with the ubiquitous and familiar Playmate cooler. Dreyfuss is shown because Gantz had reached with his narrative the year 1972 in which “Henry Dreyfuss and his wife, Doris, both terminally ill, designed their own death by carbon monoxide at their home in South Pasadena.”

Two years prior a design firm had reorganized becoming Goldsmith Yamasaki Specht, Inc (GYS) and it was a designer in his firm whose name, Marlan 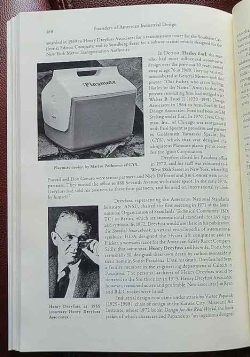 Polhemus, is unfamiliar although that which he created is oh, so familiar; the Playmate coolers for client Igloo Corporation.

No surprise, too, is that Raymond Loewy figures large in the narrative for two reasons. One is for his own abilities and accomplishments. The other is that designer Tucker Madawick (1917–-2006) who had joined Raymond Loewy Associates in 1947 (RLA would become RLC two years later when it was incorporated) and was assigned, along with Carl Otto, with re-opening the RLA office in London, was also a close friend of author Carroll Gantz. Madawick placed his files, photographs and more at the author’s disposal as Gantz notes in his Acknowledgments. Then too there are all those other talented and able designers—a veritable alphabet soup of them too numerous to mention all by name—ranging from Gordon Buehrig and Bob Bourke to Robert Tyler and Franz Wagner staffing RLA/RLC offices around the globe serving the design needs of the equally long list of clients.

Founders of American Industrial Design is a wonderful read about men and women who have given shape and form to so much of this world we live in. And, of course, even as you reach the last page of the book, it’s with the awareness that the world of design is ongoing thus a subject for, if not exactly a sequel, another book about industrial design in the twenty-second century.

Posted Under: Art, Artists and Design | Author: Helen Hutchings | No comments yet