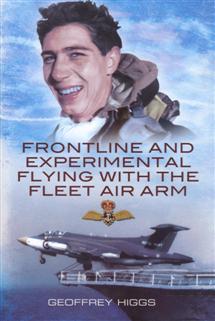 Every now and then, the gearheads ought to put aside the technical tomes and give a thought to the folks whose efforts are behind the technology. In the case of this book, it is the aviators and, to some extent, the sailors who would come away more inspired by reading of the author’s exploits.

Formed in 1924 as a unit of the Royal Air Force, the Fleet Air Arm is the branch of the British Royal Navy responsible for the operation of naval aircraft. From hands-on flying to administrative jobs, Higgs’ 35-year military career covered a lot of ground. Aviation enthusiasts, certainly British ones, will readily relate to Higgs attributing his interest in flying to seeing the English long-distance aviation pioneer Sir Alan John Cobham (1894–1973) in action during his National Aviation Day displays between 1932 and 1935 whose goal it was to foster “air-mindedness” among the populace. They certainly did in Higgs, so much so that he was still underage when in 1943 at the tender age of 17 he knocked on the doors of the Royal Navy Interview Board to volunteer for pilot training. Between being accepted into the service a year later and ending it in 1978 after a stint as Director-General Weapons lies a wealth of experience flying planes and, inevitable for a career officer, desks.

Almost every generation of flyers starts out on propeller-driven trainers—the DH Fairchild Cornell in Higgs’ case—but his generation was the last to experience actual operational flying of fabled WWII machinery such as the Hellcat, Sea Fury, and Spitfire. From single-engine propeller plane to multi-engine jets Higgs has captained about one hundred types, including gliders and helicopters. Add to that his rather unique activities during his test-pilot days—such as deliberately penetrating thunderstorms with an F4 Phantom to get the Concorde its rain-erosion certificate (“like taking the family saloon at high speed over a tank range”)—and there’s a lot here to interest the reader. Incidentally, Higgs was the first to take a Royal Navy aircraft across the Atlantic without in-flight refueling or navigational aids.

The subtitle “Purely by Chance” alludes as much to the various turns in Higgs’ career as the element of chance that pervades the life of any pilot. The whole book, in a way, is a product of chance because it was Higgs’ family that nudged him to record his memoirs for private use as a family record—an enterprise he, initially, considered an unwelcome distraction from his post-retirement life as an amateur water colorist. Therein lie both its charm and, possibly, its limitations. Not intending it for public consumption, Higgs professes to seeing no need to consult outside sources for corroboration or research. These recollections are strictly based on his logbooks and memory. Even when this manuscript came to a publisher’s attention (when and why and how is not explained), nothing changed in this approach except to give the project a less limiting title.

So, with this caveat, follow Higgs from one cockpit/conference room/country to another. You’ll be as surprised as he is that he lived to tell about some of these adventures. Anyone who knows, for instance, about carrier landings (of which Higgs has about 1000 under his belt) knows the challenges they pose. The writing is quite polished and on that level alone the book is a pleasure. However, the reader who just wants to pick up the book at random to read a snippet here and there will be constantly frustrated by the lack of dates. Most often the text will merely use expressions such as “several months later” or “in March the next year” which forces the reader who has an interest in following the chronology to search dozens of pages backwards and forwards to find out what year is being talked about.

The photos, all b/w, are bundled into two 8-page sections. Considering the large inventory of aircraft he flew it is rather disappointing to see so few illustrated. Cf. the second section is absolutely dominated by the Scimitar and HMS Victorious. A notable photo on the car front is one of his 1938 SS Jaguar, “a rather ancient motor car” as he himself says, by the time he owned it.

Appended are an account of ferrying Provosts to Burma and a full list of all the types Higgs flew. The Index is ok but has limits: cf. if you wanted to read about Higg’s test pilot training would you know to look under “ETPS” (which is not spelled out and stands for Empire Test Pilot School)?