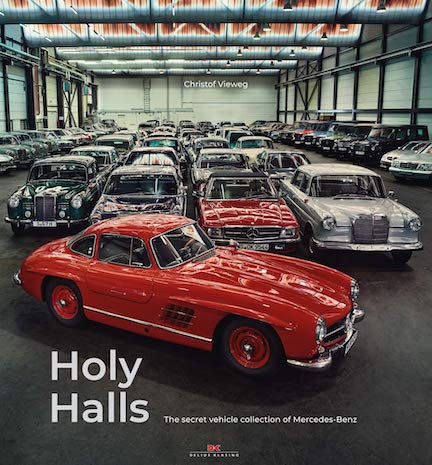 It’s no secret that many carmakers have museums, and it should not come as a surprise that they may have more artifacts squirreled away than they put on public display, but in the case of Mercedes-Benz things are rather a bit extreme.

A company that has a continuous history of over 130 years obviously must have gotten many things right in order to not only survive this long but, in pretty much any era, be at the forefront of its field. Daimler, Benz, Daimler-Benz, Mercedes-Benz—whatever name was over the door at any time, the firm has a deep catalog of groundbreaking machinery, equally at home on the road, at the races, and at concours.

Right outside the main gate of the Daimler factory and global headquarters in Stuttgart is a nine-story, cloverleaf-shaped architectural marvel in aluminum and glass that is home to the company museum. The building’s three overlapping circles with the center removed to form a triangular atrium recalling the shape of a Wankel engine form a “double helix” interior designed to maximize exhibition space. €10 gets you through the door. Or, you could spend €59 on this book and see things no amount of money can buy access to. 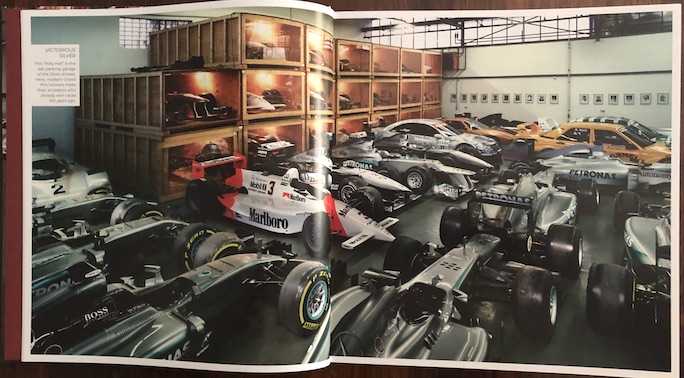 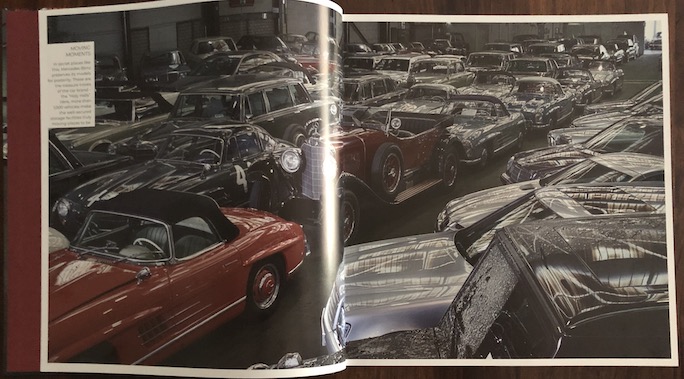 Ok, so why is that G Wagen in the bottom right only wet on the passenger half of the car?? If the author or photographer noticed it, and how could they not?, they’re not telling.

The current museum opened its doors in 2006 but Daimler started an in-house collection, to be used as a design and technical reference for its personnel, as far back as the 1910s. In 1923, the firm began to systematically collect artifacts (Daimler and Benz merged in 1926) and the first proper museum opened in 1937. Today, some 160 cars and over 1,500 exhibits tell the brand’s story—but Daimler AG, which for decades now has actively been buying important models they don’t already own on the open market, has another thousand-odd cars stored elsewhere, in multiple storage facilities, currently 12 inconspicuous commercial buildings. That the “Holy Halls” exist is no secret but where they are located is. And even if you knew, you wouldn’t get in. German automotive journalist Christof Vieweg (b. 1956) did, and was allowed to bring along a photographer, Igor Panitz, who is known for his automotive and architectural work. 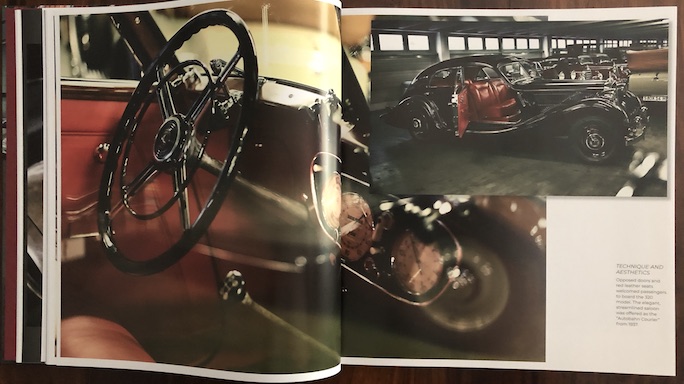 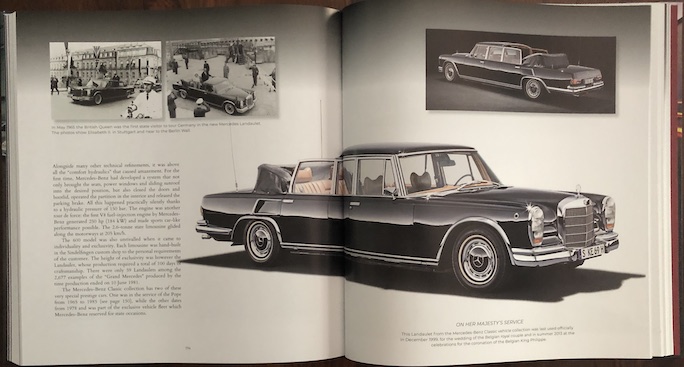 Moreover, Mercedes made available photos they themselves had started to take 2016–18 to document their holdings. Divided into broad topics, each of the 6 chapters begins with a dozen or two pages of photos of the cars in that respective genre—pre-1945, race cars, post-1945, prototypes, collection cars at public events—at the warehouses. These photo essays begin with a sort of mise en scene and then switch to photos of particularly noteworthy cars, often including close-ups. This is then followed by rather more detailed features of some 50 cars, about 10 to a chapter. What this small number means should be obvious—even to those reviewers who have carped about it: this book is not an overall history of M-B. And why should it be?? Plenty of those bend the bookshelves already—but none exists that shows what this one does. That the photo captions and the narrative descriptions could reach deeper, well, sure, but it is what it is. One oddity worth belaboring is that the chapter subheads listed on the Table of Contents (below) are not the same as the heads on the actual pages. A needless complication but no real downside. 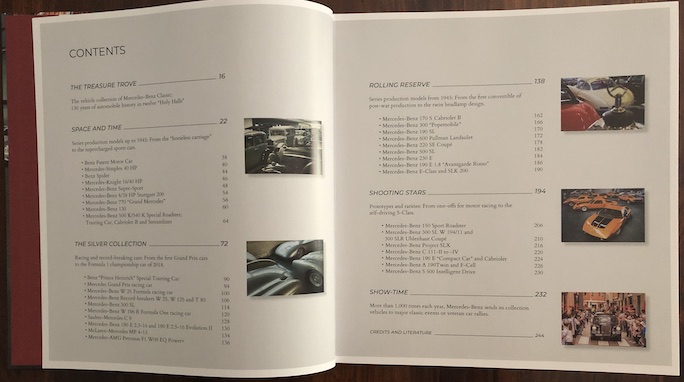 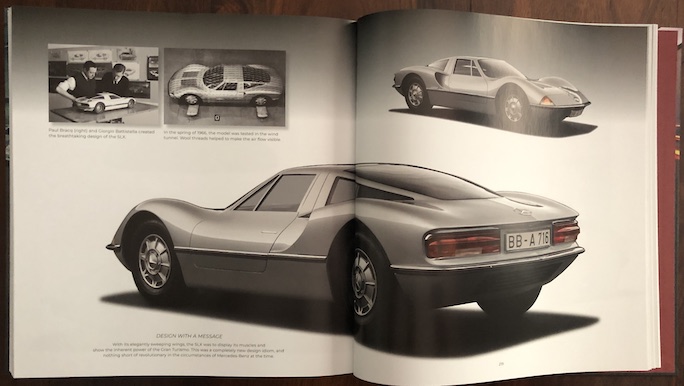 Where were you in 1966? Even if you paid attention to cars you probably never saw this one up close. Ruled too controversial by the in-house brass, the SLX never made it past the model stage.

Those 50 cars, incidentally, were mostly shot in the AKKA Concept studio in nearby Sindelfingen. Its founder, Harry Ruckaberle, invented the Circulight lighting process (a light “sail” that moves around the object being shot) that creates a certain soft light. Ruckaberle does a lot of work for M-B and is a highly competent fellow—that the photos here don’t exactly jump off the pages is probably a function of humdrum, mass-market printing. The oldest car here is the one that started it all, the Patent Motor Car and the latest is a 2013 S 500 Intelligent Drive. From Popemobile to Arnold Schwarzenegger’s S Class, and the 1888 motorboat “Marie” to the iconic blue race transporters, you’ll be glad this book is finally available in English. 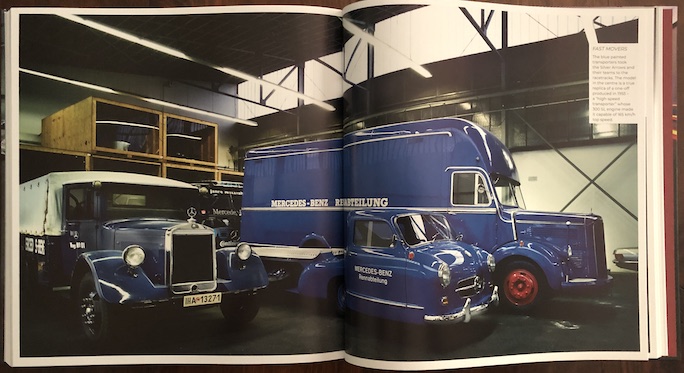 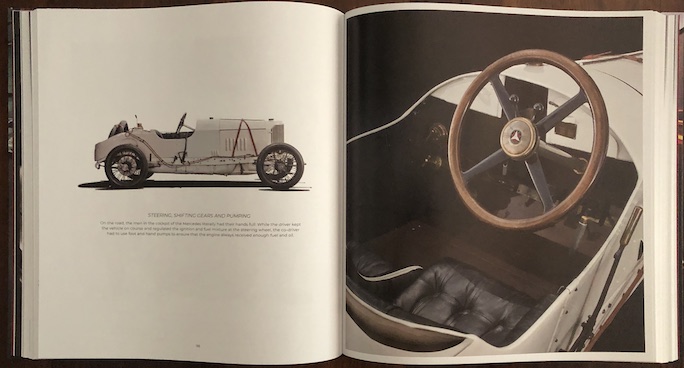