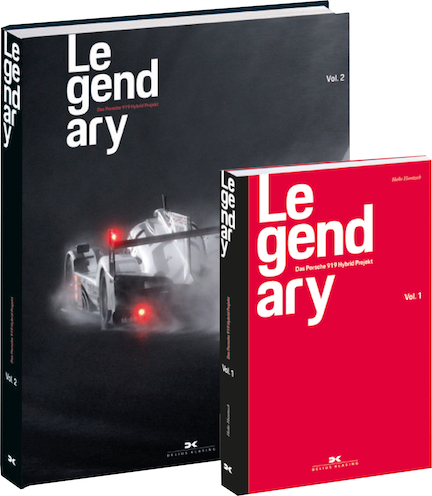 “Our performance really wasn’t worth watching. The car was bouncing more than driving. The whole appearance had an air of not being ready yet. Many of us didn’t know what the others were doing. All of them good people, but not yet a running team. We still had many things to learn.”

“Porsche has proven everything: the 919 Hybrid Evo can go faster than a Formula 1 car and is even able to master the unique challenges posed by the Green Hell. The demonstration of what this innovative development is able to achieve beyond restrictions from the regulations has been successful and impressive. The sun has been shining on the LMP program, literally until the very last lap.”

(German, English) One otherwise run-of-the mill October day in 2018, a reading from this book was given, prior to its release, at the Porsche Museum. That would have been plenty interesting, for some, but more interesting, for most in the Porsche world, was the reason for it: earlier that day, two 1000 hp Porsche racecars had ambled though the German countryside, with police escort, VIPs in tow, making the 15-mile trip from Weissach to Zuffenhausen. This concluded the “Tribute Tour” that had taken the 919s at the conclusion of their ultra successful racing life to several major cities and top circuits in the world before being put on display at the museum.

Thank goodness there is now an English version of this book—to be specific of Volume 1, the so-called storybook which is now available in either German or English. Volume 2 is photos-only and had bilingual captions from the get-go. If you have this publisher’s Porsche 918 Spyder book you will find the same execution here: a small book for the words and a big book for the photos, rubberbanded together. (Here it’s just a fat, black rubber band, embossed with the book title, whereas the one on the 918 book was x-shaped like the crossbracing you’d find under the hood of a car; it required considerable dexterity to put on, but what fun!) 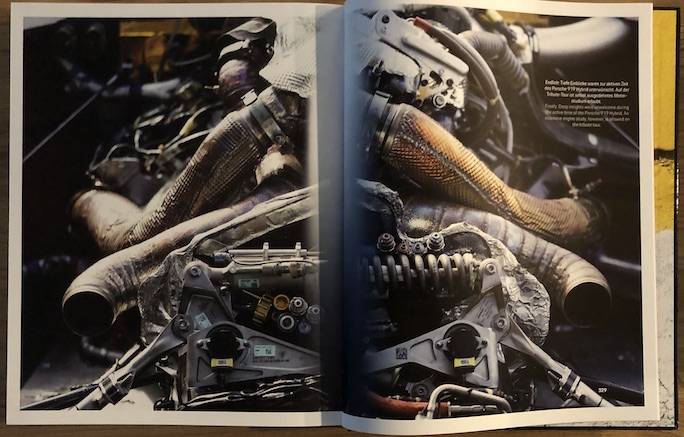 Those two quotes above: the book covers pretty much everything in between. It is clearly written for the reader who is already familiar with the 919’s existence and purpose—it’s not until several dozen pages in that the book even mentions that the 919 has hybrid propulsion, and not until much later that the 919 is the only racecar to recover energy under both braking and acceleration.

For that matter, the book seems to also assume that readers will be familiar with the author’s name as nothing at all is said about her or if this book is an independent effort or a Porsche PR project. Heike Hientzsch herself was part of the LMP1 communications team. She is a journalist and editor and worked as Press Officer und Media Manager for the Williams and Sauber F1 teams. The reason this is relevant is because the motorsport community is small, and many of the people she already knew make an appearance here because the 919 project started with a blank sheet, in a hurry, and had to design and spec a car months before the final racing regs were announced. Ergo Porsche installed as principals top-level veteran experts from all across motorsports, especially F1. 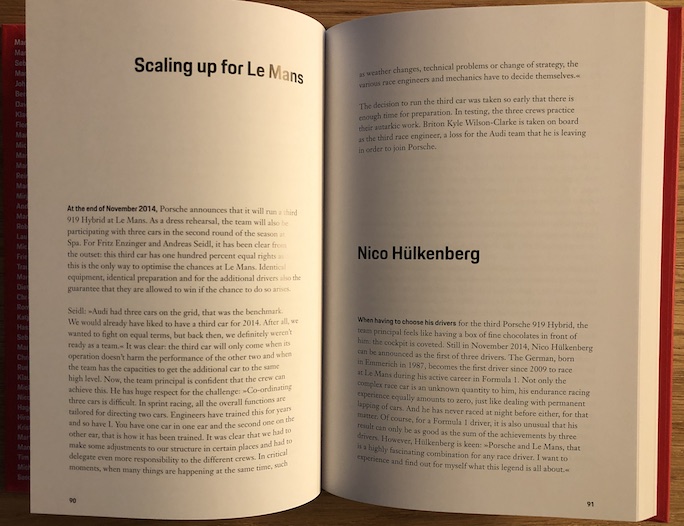 The book begins with a chapter on an early hire, Friedrich “Fritz” Enziger, the Austrian ex-BMWer who was looking for a bigger challenge and accepted the call in 2011 to develop Porsche’s LMP program from scratch—no staff, no building, no nothing—and have a car race-ready for the 2014 season. (Since 1/19 he’s VP of Motorsport at Porsche and, in parallel, Head of Group Motorsport for the whole Volkswagen Group).

The text is written in a breezy, journal-type style, mostly in present tense and using lot of quotes. This makes it very engaging and lively but it still manages to dispense, where it matters, good detail on the myriad of technical features of this model—well, two models, really, who went about their propulsion in quite different ways. This in itself is a key aspect of the story inasmuch as, for once, the new regulations laid down for the hybrids—which are the whole reason Porsche decided to return to WEC racing—allowed designers a degree of freedom not seen since the Can-Am days! An earlier 911 prototype, the GT3 R Hybrid racecar, and the 918 Spyder had already dealt with hybrid technology and so yielded at least a few of the puzzle pieces to help the LMP team take it to a new level. That said, absent an Index or even a Table of Contents you’ll never find any of these bits again unless you make your own notes. 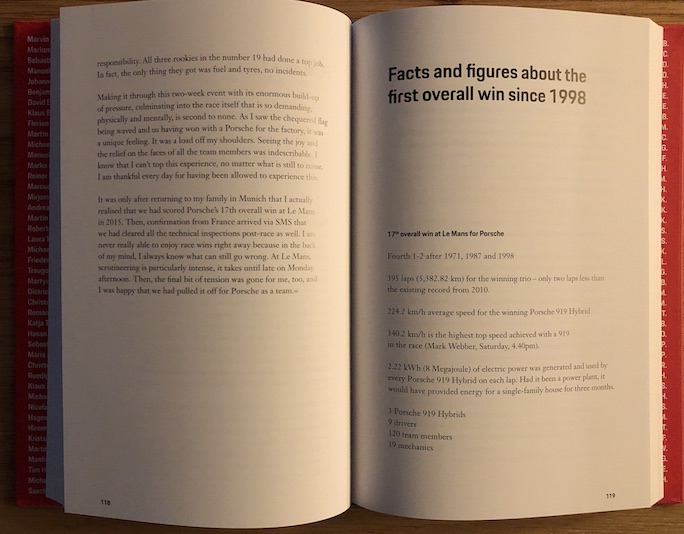 The book gives a really good look at Porsche’s decision-making protocols, management philosophy, and corporate culture. The story progresses in the main chronologically, in mostly quite short chapters and focusing primarily on the four competition years. This is interspersed with what in another book would be sidebars: driver profiles, team clothing (way more complicated than an outsider would suspect!), and other items of interest that don’t quite fit a timeline. The book ends with photos of the LMP1 project and team leaders. 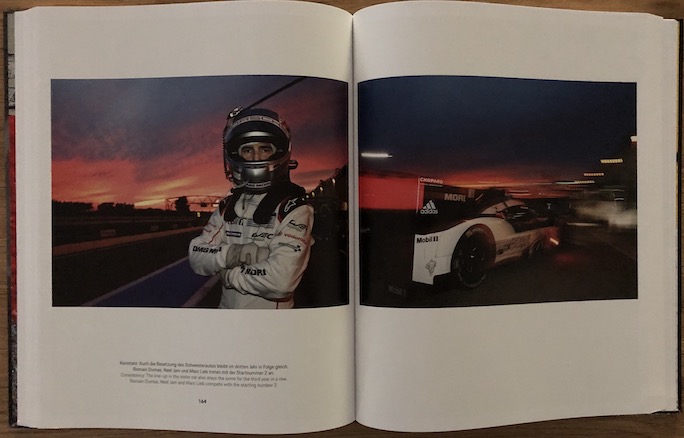 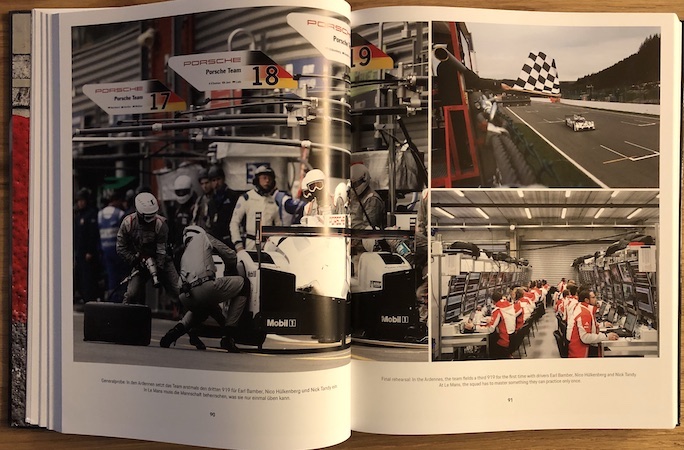 Now to the photos. Just as Heike Hientzsch, German photographer Jürgen Tap had unrestricted access to anyone and anything. He specializes in racecar photography and has done several books about Porsche and Ferrari including a self-published one in a generous 13 x 11″ landscape format about this very car, Porsche 919 Hybrid photography: Jürgen Tap 2014. In the US you may have noticed his work in Automobile magazine. 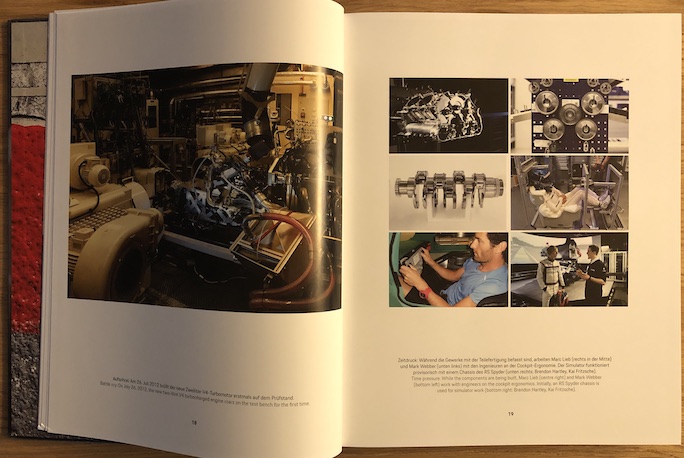 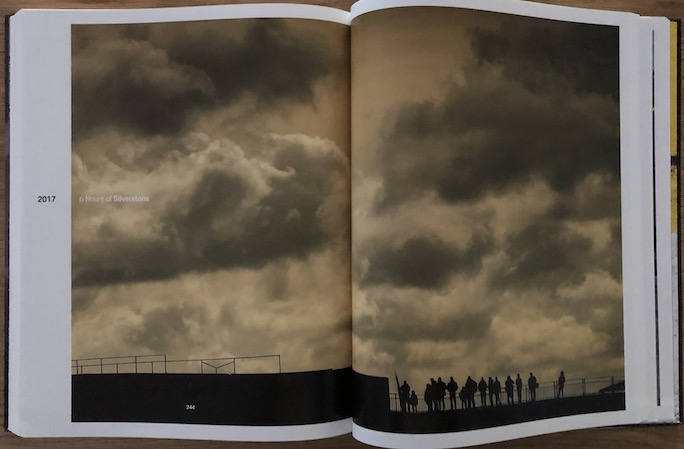 The photo book actually does have a Table of Contents and, to repeat, it is a larger size and it is bilingual. Except for a Foreword by project lead Enziger it contains no text other than photo captions, and these are a bit on the brief side. Plenty of action, plenty of trophy waving, plenty of mood shots, all photographed with technical and artistic competence. This is a Delius Klasing book so of course paper and printing are very good—and the whole thing is quite absurdly cheap! 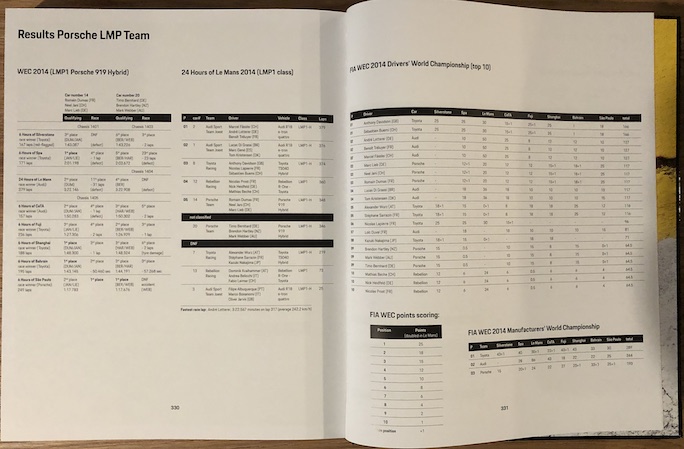 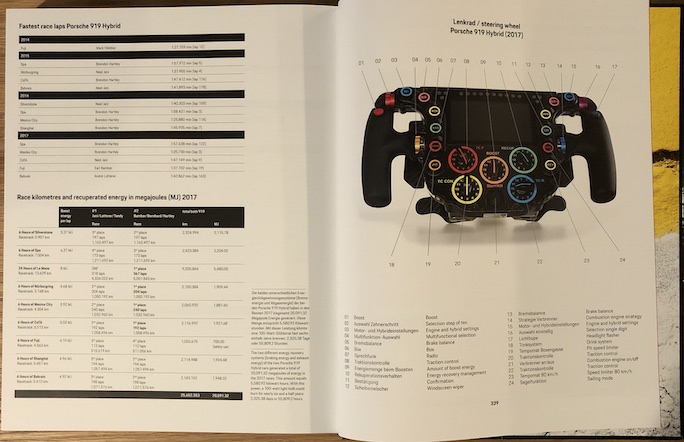 To date, this is the only book about the 919. It obviously had factory support if not more, which, on the one hand means deep access and on the other, possibly, a bit of a more sanitized look at the proceedings.