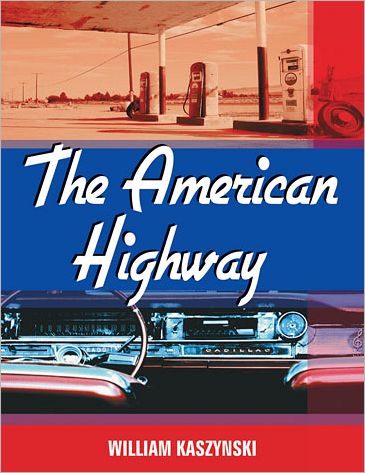 “With the exception of the Incas’ extensive system of roads, road building was virtually abandoned after the fall of the Roman Empire until approximately 1800.”

It has been said that modern highways are the cathedrals of our age, and this analogy is solidly reinforced in William Kaszynski’s book. He takes the reader from Native American foot trails to the possibilities of automated, computerized superhighways, and the book thoroughly underscores his thesis that “the American highway is a 20th century product of social, political and economic factors and continues to evolve to accommodate the ever-changing needs and tastes of the traveling public.”

First published in 2000 as a hardcover (ISBN-13: 978-0786408221), this softcover reprint is divided into six sections. A Brief History of the Road examines The Appian Way, The Camino Real, The Oregon Trail, post roads, steam power, bicycling and, briefly, the birth of the automobile. Kaszynski reminds us that automobiles “evolved into a hybrid” of the features of both carriages and bicycles. Even in this introductory chapter, he touches upon the relationship among the public, commercial enterprise, and the government that ultimately gets road building accomplished.

The Early Days (1900 to 1919) discusses the Ford Model T, details the invention and use of concrete, highlights the rise of gasoline production, and records the emergence of gas stations and tourist camps across America. In “The First Generation” (1920–1945) the reader, through copious archival photographs, realizes the fantastic growth of automobile traffic, the origins of famous roadside accommodations such as Stuckeys, Howard Johnson and Dairy Queen, the aesthetics of gasoline station architecture, and the period look of road crews and equipment. And as any movement or development must have its time of distinction, Kaszynski’s section “The Golden Age” (1946–1969) marks with great enthusiasm and even a sentiment of pride the birth and gestation of our Interstate Highway system, the wonder of 70 mph speed limits, and the rise of the modern motel. In this section are well-chosen photographs of President Eisenhower (he lobbied hard and successfully for the interstate system, and the reader is reminded that the Interstates had as much to do with military strategy as they did with convenience), early McDonald’s restaurants, Holiday Inns, cars of the era, and the sweeping curves of vast highway interchanges.

In The Interstate Era (1970 to 2000) Kaszynski describes how environmental and aesthetic concerns were finally considered in the planning of major highways, and how filling stations evolved from repair facilities to gasoline suppliers and devolved from stylish architecture to functional boxes. He describes the consequences of the 1970s fuel crisis and, finally, the glory of the all-but-complete Interstate Highway System. The last section, The Future, deals with E-Z Pass, the preservation movement saving highway markers, classic gas stations and the like, the midlife crisis of our Interstates, and the predictions and experiments concerning computerized traffic systems.

What makes The American Highway enjoyable is the panoply of photographs, and the reproductions of old gasoline company logos, highway signs and various illustrations—I especially liked the reproduction of a 1956 Popular Science magazine cover showing a happy couple using an automated, futuristic freeway. Also, Kaszynski’s enthusiasm for his subject is apparent throughout the text and it is also evidenced by the fact that many of the photographs are from his personal collection. What may make it less enjoyable for those, like myself, who are not that fascinated by highways, parkways and freeways, is that at times the abundance of facts and figures, graphs and charts is overwhelming; but it is hard to fault the book for this since the nature of the book would naturally involve such depth and scholarship. What did bother me, however, was that the controversy concerning using highway planning to eliminate or disrupt various, often poor, neighborhoods and the ecological concerns were mentioned but given short shrift. It was as if in his zeal, Kaszynski did not wish to dwell on anything at all negative. Overall, this is a minor complaint, and this volume is certainly one that should be in public collections for reference, and in the private collections of those who have a strong interest in the history of American highways.

Includes a table of illustrations, four pages of source notes and a thorough index.

Posted Under: Automobiles, Other Genres, Travel | Author: Bill Wolf | No comments yet

The Last Atlantic Liners: Getting There is Half the Fun »
« Road to Valor