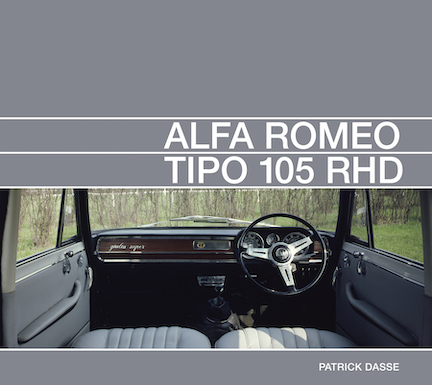 (English / German) If you’ve collected this series of books on the Tipo 105 so far, don’t stop now—you’ll never sleep well if you do because this ninth installment will be the last and who’d want an incomplete set! It won’t be the last of Dasse’s books, thank goodness. One can only wonder and wait what will catch his attention next. All his Alfa books have been rather esoteric and certainly expanded the envelope of the known.

The Dasse opus to date. Would you rather look at a $1000 bill or a pile of books? Besides, those $1000 won’t hold their value the way the books do!

It seems obvious and inevitable that, even if only for the sake of completeness, there should be a book dedicated to the righthand-drive cars. Moreover, not every model and not every variant within a model run had a rhd version (due to such varying factors as popularity or, related, tax rules based on engine displacement) so there is clearly a use for combining all that can be known in one book.

Dasse certainly recognized that need and intended to produce such a book early on in the series—except he could not find in the otherwise inexhaustible Alfa archive the one thing that made all his other Tipo 105 books relevant and special: factory photos. Turns out, for the rhd models which were obviously made in much smaller numbers than the lhd cars, Alfa Romeo couldn’t be bothered to take photos for press use and left it to the dealers/importers to take their own.

Not a glamor shot bust useful.

Some assembly required. CKD = Completely Knocked Down, to keep the sales price down. This is how the first rhd cars left the factory, bound for South Africa.

Oddly, even his usual go-to source, Alfa Romeo’s Centro Documentazione manager Marco Fazio, had no leads and it wasn’t until a chance phone conversation with a publishing colleague of Dasse’s, photographer Reinhard Klein, pointed him to the Motorsport Images agency/archive in England. Among their 26 million artifacts were enough period press photos from car reviews and road tests etc. to finally augment the “mere handful” of rhd photos that Alfa had produced for owners or service manuals. (There were, however, none for the GTC and the Montreal so you’ll have to consult other model-specific books for those, for the latter especially Bruce Taylor’s.)

The book follows the same methodology as the previous ones—meticulously captioned photos, some basic text about the model/variant (or within that, editizione), extensive lists of model year changes, and tables of technical specs and production numbers by VIN.

All the books contain basically the same Foreword but tweaked to apply to each book’s specific subject matter. Skip reading it and you’ll not have the benefit of Dasse laying out how he will circle the wagons. (To wit: don’t be complaining that there is overlap among the books or even among sections in a book—there’s a reason for it.)

Covered here are Giulia, Giulia GT, Spider, Berlina, and Montreal. Looking at the depth of detail contained in this and the other 8 books one can only wonder how Dasse’s mind and workspace are organized to keep this much data on tap.