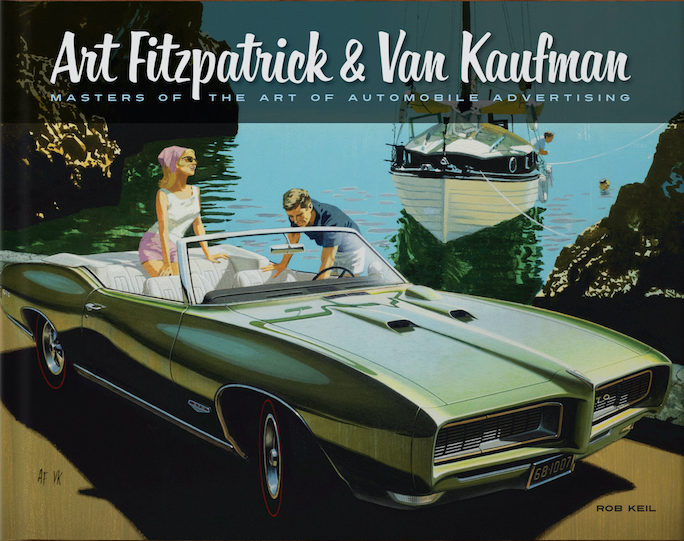 Art Fitzpatrick likely would have been successful no matter what profession he chose for the reality is he was essentially a canny and savvy businessman as his life’s story reveals for he excelled in each of the diverse enterprises to which he addressed himself. Early on he thought he wanted to be a car designer and, once schooled, did work apprenticeship-type jobs for several manufacturers. That’s also when he discovered that creating illustrations for advertising paid markedly better than designing cars. Military service during World War II stationed him in NYC. Side work doing illustrations was a necessity to afford living there. By 1946 Mercury was a major client.

Henry Kaiser wanting him to work for him was another awakening as Kaiser told him to state his terms. Fitz, as he preferred to be called, set out what he was sure would be unacceptable terms—including (and this is key) full rights to any and all art he created. As one client led to another the volume of work creating ad art and new car catalogs led to the collaboration with Van Kaufman that would endure with Van doing the background scenes, Fitz the car. Later still others were added to the team with one adding the people into the scene, another doing last-minute corrections to car detail to reflect changes being made by the manufacturer.

All illustrations for all years of Grand Prix models were done differently from any other automotive work in that the car was actually painted on the same paper as the background, not painted separately, cut out and pasted on after the background, which for Grand Prix were always French scenes, was completed.

Those major clients covered chronologically are: Mercury 1951 to 1953; Buick 1953 to 1958 followed by the entire GM corporation during its landmark fiftieth anniversary year. Then came Pontiac 1959 to 1971 and last, as photography was gaining popularity with the ad agencies, was Opel 1972 to 1974.

It all ended nearly at the end of ‘70s and Fitz turned to his next money-making profession. He relocated to Southern California and became a real estate developer. And again, he was a success. But after a decade of this, as he said, “I decided I didn’t want to sign any more 20 million-dollar loans, so I quit while I was ahead.”

The pages show how research photos were taken and used by Van Kaufman to create his background. Meantime Art was creating the car separately and once it was glued in place another staff member added the people.

Innumerable articles have been written over the years about the Fitz- and Kaufman-created advertising art which was often signed with their AF/VK. The automotive community didn’t forget. By the mid- to late-80s Fitz’s art was once again in demand; he received some commissions including from USPS for two sets of postage stamps, sold prints of his and Van’s earlier creations (Van passed in 1995), and did public appearances and interviews such as the ones that resulted in this book. 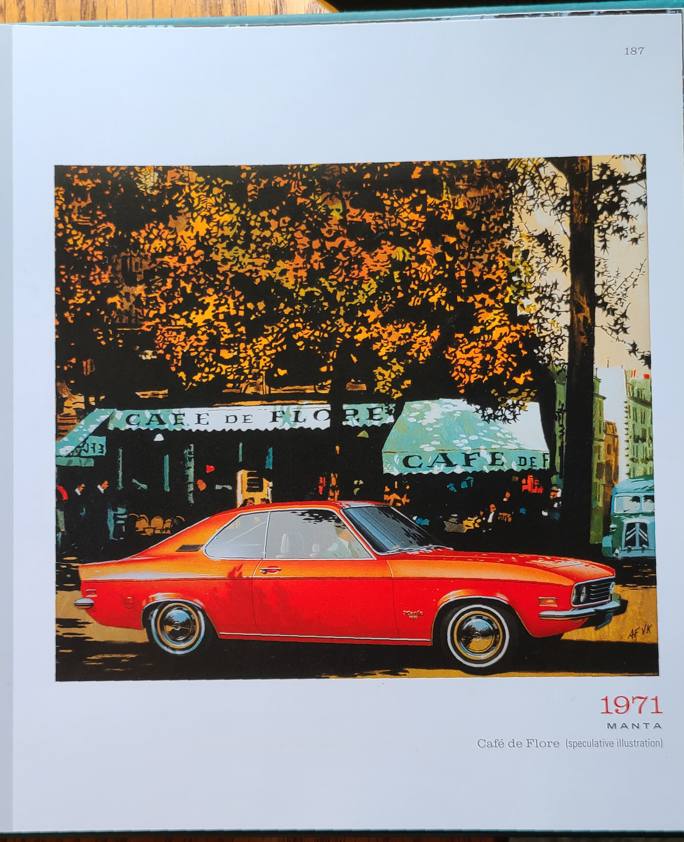 Work for Opel followed for half-a-dozen years after the Pontiac relationship ended on European-sold models as well as those sold in the US, such as this Manta.

That this book’s author, Robert J. Keil, is himself “an award-winning advertising art director and filmmaker” plays its part in his book’s detail that goes beyond those previously referenced “innumerable articles” for Keil devotes pages to detailed explanations of the process Fitz and Van utilized to create their illustrations; Van’s ethereal, romantic backgrounds with Fitz’s very detailed and precise presentations of the cars not merely correct to the tiniest detail (which they are) but totally realistic despite never having been parked in the scene the illustration shows. Keil captures Fitz’s describing how he looked at the world around him developing his “analytical eye” as well as details of creating windshield glass and shiny chrome of a multiple-dimensioned vehicle on a one-dimensional flat surface.

Because Keil is also a professional himself his book’s layout is landscape as best presents Fitz and Van’s creations. Much of the original art Keil sourced and traveled to reshoot each himself digitally in high resolution and calibrated for color accuracy. Thus the book is visually a pleasure even as it offers new and detailed information on Art Fitzpatrick & Van Kaufman, Masters of the Art of Automobile Advertising.

Masters of the Art of Automobile Advertising

Posted Under: Art, Artists and Design, Automobiles, US | Author: Helen Hutchings | No comments yet